Via JMG: Quote Of The Day - Frank Mugisha 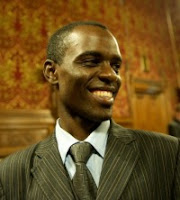 "Many Africans believe that homosexuality is an import from the West, and ironically they invoke religious beliefs and colonial-era laws that are foreign to our continent to persecute us. The way I see it, homophobia — not homosexuality — is the toxic import. Thanks to the absurd ideas peddled by American fundamentalists, we are constantly forced to respond to the myth — debunked long ago by scientists — that homosexuality leads to pedophilia.

"For years, the Christian right in America has exported its doctrine to Africa, and, along with it, homophobia. In Uganda, American evangelical Christians even held workshops and met with key officials to preach their message of hate shortly before a bill to impose the death penalty for homosexual conduct was introduced in Uganda’s Parliament in 2009. Two years later, despite my denunciation of all forms of child exploitation, David Bahati, the legislator who introduced the bill, as well as Foreign Minister Henry Okello Oryem and other top government officials, still don’t seem to grasp that being gay doesn’t equate to being a pedophile." - Frank Mugisha, director of Sexual Minorities Uganda, writing for the New York Times.
Labels: Africa, bigotry, bravery, religion, Uganda
reposted from Joe
Posted by oreydc at 6:59 PM No comments: Links to this post

Activists are calling for the resignation of Catholic Cardinal Francis George after he declared that LGBT activists who protested the church were like members of the KKK. A petition has been launched on Change.org. Several major gay and religious groups have issued statements denouncing the Cardinal.

"Cardinal George's horrific comparison of the LGBT movement to the Ku Klux Klan drives an unnecessary wedge between Catholics and the hierarchy," said Dr. Sharon Groves, Director of HRC's Religion & Faith Program. "This is a sacred time of year for many people of faith, a time when we should be creating and cherishing unity in our communities -- not casting about dangerous and divisive rhetoric. As people of faith we should expect better from our leaders."


"As a lay Catholic, I am profoundly saddened that Cardinal Francis George defiles his office by comparing our LGBT family, friends and fellow Catholics to the Ku Klux Klan," said Anne Underwood, co-founder of Catholics for Marriage Equality. "His rhetoric rings particularly off-key coming the week before Catholics celebrate the birth of Christ. As a Catholic who responds to our historic Church teachings to stand with all marginalized people, I work for freedom and fairness for my LGBT friends. I feel dismissed and betrayed by our hierarchy, but not by our God, for whom Cardinal George did not speak."


The Rev. Eric Lee, Executive Director for the Southern Christian Leadership Conference said: "I have spent most of my adult life engaged in the civil rights struggle for African American people who have been terrorized by racist Klan violence," said Lee. "I am insulted by the comparison of the Klan to the current LGBT movement. When we distort the history of terror for cheap political aims, we only inflict pain on those whose lives have been scarred by the Klan."

Chicago Archbishop Cardinal Francis George foolishly compared the LGBT community to the Ku Klux Klan. He has crossed so far over the line of basic decency that he couldn’t see it with a pair of binoculars. George’s over-the-top remarks were extreme to the point where they shredded his credibility and permanently damaged his ability to serve as a respected voice of reason. This outrageous comparison of the LGBT community to the Ku Klux Klan was so degrading and hurtful that apologizing will not be sufficient. George’s only road to redemption is handing in his resignation. If he has a shred of dignity and a shard of class he will immediately step down.

Find a Refuge in Yourself

- Sogyal Rinpoche, "The Stability of Ease"
Read the entire article in the Tricycle Wisdom Collection
Posted by oreydc at 4:27 PM No comments: Links to this post

Via Gay Poltics Report: A kiss to seal a banner year

Posted by oreydc at 4:24 PM No comments: Links to this post