Via JMG: Did Nixon Have A Gay Affair? 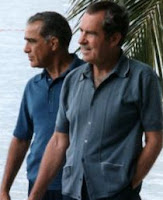 According to a new biography of Richard Nixon, Tricky Dick had a long-running gay affair with Mafia-insider Bebe Robozo, who was investigated for acting as a money-carrying middleman between Howard Hughes and Nixon.

Fulsom uses recently revealed documents and eyewitness interviews — including with FBI agents — to shed new light on long-standing suspicions among White House insiders that Nixon may have been more than just good buddies with Rebozo. He claims Nixon's relationship with Pat, his wife of 53 years, was little more than a sham. A heavy drinker whom his own staff dubbed 'Our Drunk', Nixon used to call his First Lady a 'f***ing bitch' and beat her before, during and after his presidency, says Fulsom. The pair had separate bedrooms at the White House — and in Key Biscayne, the exclusive resort near Miami where Nixon holidayed, Mrs Nixon didn't even sleep in the same building. Rebozo, however, was in the house next door. Fulsom claims one of Nixon's former military aides had a secret job 'to teach the President how to kiss his wife' so they would look like a convincing couple.

One source told the book's author that Rebozo "was definitely part of Miami's gay community." Rebozo's personal wealth reportedly quintupled during Nixon's years in office.
Labels: books, GOP, Richard Nixon, The 70's
Reposted from Joe
Posted by oreydc at 3:51 PM No comments: Links to this post 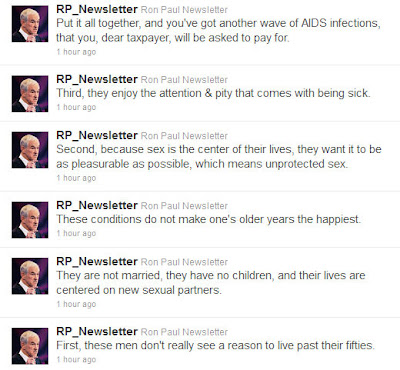 Somebody is tweeting out Ron Paul's infamous newsletters, line by bigoted racist line.
Labels: assholery, GOP, racism, Ron Paul
Reposted from Joe
Posted by oreydc at 3:50 PM No comments: Links to this post


Reposted  from Joe
Posted by oreydc at 3:48 PM No comments: Links to this post

Via JMG: Quote Of The Day - Cardinal George

"The Chicago Gay Pride Parade has been organized and attended for many years without interfering with the worship of God in a Catholic church. When the 2012 Parade organizers announced a time and route change this year, it was apparent that the Parade would interfere with divine worship in a Catholic parish on the new route. When the pastor's request for reconsideration of the plans was ignored, the organizers invited an obvious comparison to other groups who have historically attempted to stifle the religious freedom of the Catholic Church. One such organization is the Ku Klux Klan which, well into the 1940's, paraded through American cities not only to interfere with Catholic worship but also to demonstrate that Catholics stand outside of the American consensus. It is not a precedent anyone should want to emulate." - Cardinal Francis George, repeating his "gays = KKK" comparison. (Via JMG reader Robert)

The Chicago gay pride parade attracts 800,000 people. It proceeds through a heavily congested, dense urban cityscape. Absolutely positively everything in its wake is disrupted. What on earth makes one service at one church on one day special enough to change the start time of a gigantic parade? Let alone excuses comparing 'the gay liberation movement' with the 'Ku Klux Klan'? No, cardinal, the gay pride committee is not targeting the Catholic church. 'The gay liberation movement' is not targeting the Catholic church either. Your church building is affected in no way any different from hundreds upon hundreds of buildings for miles in all directions (Lake Michigan notwithstanding). You really do need to get out more.

Posted by oreydc at 8:01 AM No comments: Links to this post

- Jeffrey Hopkins, "Everyone as a Friend"
Read the entire article in the Tricycle Wisdom Collection
Posted by oreydc at 7:59 AM No comments: Links to this post