Via JMG: RELIGION CENSUS: Fewer Than 50% Of Americans Are "Adherents" Of Christianity 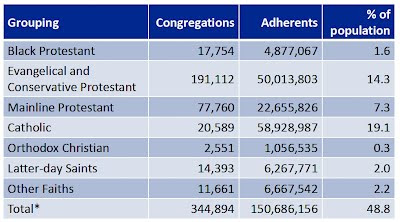 According to a just-published analysis of the 2010 Religion Census, fewer than 50% of Americans are "adherents" of Christianity. The percentage who would self-identify as "Christian," regardless of church membership and attendance patterns, is presumably higher.

The above-linked reports offer no insight as the number of Americans who consider themselves atheist, agnostic, anti-theist, or merely "unchurched."


Reposted from Joe
Posted by oreydc at 11:16 PM