Via JMG: USMC Commandant: I'm Not Seeing Any Problems Since The Repeal Of DADT 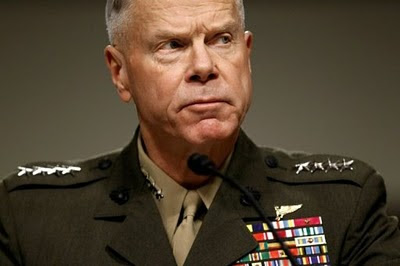 The Commandant of the Marine Corps says that he's not heard of any problems related to the repeal of DADT. Michael Lavers reports at the Washington Blade:

“I don’t think there is a problem,” said Commandant Gen. James Amos during a National Press Club luncheon in downtown Washington. “I don’t see it. I don’t hear about it.” [snip] “We obey orders,” said Amos. “We do that better than anybody does and we have.” He again noted that he doesn’t “even get a question” about openly gay and lesbian servicemembers from subordinates and other Marines. “I don’t hear anything,” said Amos. “I’m not seeing anything at all, so I’m very pleased with how it’s turned out. I’m very proud of the Marines."

RELATED: You may recall that Amos was the most strident opponent of the repeal out of all the heads of the military branches. In December 2010 he even claimed that openly gay soldiers would cause Marines to lose their legs.

"When your life hangs on a line, on the intuitive behavior of the young man ... who sits to your right and your left, you don't want anything distracting you," Amos told reporters at the Pentagon. "I don't want to lose any Marines to distraction. I don't want to have any Marines that I'm visiting at Bethesda (hospital) with no legs," he said. He added that "mistakes and inattention or distractions cost Marines' lives. That's the currency of this fight."


reposted from Joe
Posted by oreydc at 6:48 PM