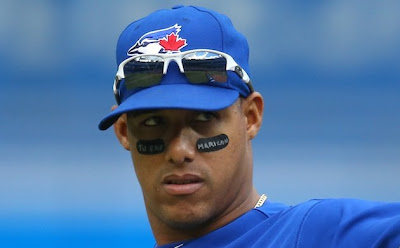 Toronto Blue Jays shortstop Yunel Escobar took the field on Saturday with "You are a faggot" written in Spanish in his eye black.

Several messages seeking comment from Blue Jays general manager Alex Anthopoulos were not immediately returned. The Jays are expected to hold a news conference Tuesday afternoon in New York, before their game against the Yankees. Escobar, 29, was originally in Sunday’s starting lineup, but was scratched before game-time. A club spokesman said he had the flu. The photo generated a flurry of responses on Twitter, mostly critical of Escobar, some urging that he be suspended for the rest of the season, some urging fans to reserve judgment until “context” became available. Others speculated that he had been pulled from Sunday’s lineup as a disciplinary measure.

Escobar was drafted into the Major League by Atlanta in 2005 and was traded to Toronto in 2010. Last year he signed a two-year contract extension worth $10M. Last year a Change.org petition was launched asking the Blue Jays to join the eight other MLB teams to make an It Gets Better video, but that has not yet happened.


Reposted from Joe
Posted by oreydc at 9:06 PM