Online behemoth Amazon has publicly stated their support for the marriage equality bill about to be voted on by the legislature of their home state. Wahoo!


"Amazon is joining other Pacific Northwest companies, including Microsoft, Starbucks and Nike, in support of Washington state's marriage equality bills," Amazon said in a statement released by spokeswoman Mary Osako. "The spirit of these bills is consistent with our longstanding employment practices." Gay marriage supporters believe they have enough votes to pass the measure out of both houses, and Gov. Chris Gregoire has said she'll sign it into law.

Do I hear another boycott call? Squeee!
Labels: Amazon, marriage equality, Washington state
reposted from Joe
Posted by oreydc at 10:26 PM No comments: Links to this post

Posted by oreydc at 7:43 PM No comments: Links to this post

Diary of a Madly in Love Gay Couple

Posted by oreydc at 7:35 PM No comments: Links to this post

via JMG: It Gets Better Lands MTV Special

MTV will air a star-studded hour-long special about It Gets Better. Among those slated to appear are Zachary Quinto and Adam Levine.


It just keeps getting better over at MTV and Logo — and for gay teens on TV. EW has exclusively learned that the sister cable networks are jointly prepping a special titled It Gets Better, which will chronicle the stories of three young people struggling with LGBT issues. The 60-minute special will premiere on both MTV and Logo on Feb. 21 at 11 p.m. Syndicated columnist Dan Savage — who in fall 2010 launched the buzzy It Gets Better Project, which led to an avalanche of more than 30,000 videos of encouragement for LGBT youth — will anchor the hour. The show will include appearances by actor Zachary Quinto, Maroon 5 frontman Adam Levine, comedian Margaret Cho, Dancing with the Stars contestant Chaz Bono, and Jersey Shore star Vinny Guadagnino. Singers Sia and Jake Shears will also contribute video messages of hope and support.

Think Before You Speak - Wordplay

Posted by oreydc at 5:12 PM No comments: Links to this post 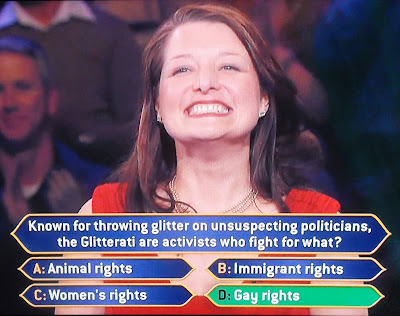 Labels: activism, game shows, television
reposted from Joe
Posted by oreydc at 5:02 PM No comments: Links to this post

"Moving forward I believe the best thing that we can do is to honor her strength, and conviction, and her leadership, by getting somebody, quickly, because we don’t have much time, into that seat who is going to carry forward in the tradition of moderate, bipartisan, common sense governance that she did so well for Southern Arizona." - Openly gay Arizona state Rep. Matt Heinz, declaring his intent to run in the special election to replace Rep. Gabrielle Giffords.

If elected, Heinz would become the fifth openly gay member of the U.S. House. That number will change this fall with the retirement of Barney Frank and with Tammy Baldwin's run for the Senate. Heinz says if Giffords' district director wants to assume the remaining months of the current term, he'll suspend his own campaign until November.
Labels: Arizona, Gabrielle Giffords, gay politicians, U.S. House
reposted from Joe
Posted by oreydc at 7:33 AM No comments: Links to this post

Watering the Seeds of Good Intentions

- Gil Fronsdal, "May We All Be Happy"
Read the entire article in the Tricycle Wisdom Collection
Posted by oreydc at 7:15 AM No comments: Links to this post

Via AmericaBlogGay: TN GOP state senator says AIDS came about from "one guy screwing a monkey"

No, senator Stacey Campfield, that's how you came about.  From Mike Signorile:

"Most people realize that AIDS came from the homosexual community -- it was one guy screwing a monkey, if I recall correctly, and then having sex with men. It was an airline pilot, if I recall."

"My understanding is that it is virtually -- not completely, but virtually -- impossible to contract AIDS through heterosexual sex...very rarely [transmitted]."

"What's the average lifespan of a homosexual? it's very short. Google it yourself.”

That last absurd tidbit comes from a discredited hate group run by a man called Paul Cameron.  He's been so discredited that the religious right refuses to even mention the guy any more, even though much of their anti-gay "science" is based on Cameron's fake "Nazi" science (that's what the Southern Poverty Law Center called it).  (As an aside, John Boehner's favorite lawyer - well, he's also well-loved by Attorney General Eric Holder and Supreme Court Justice Elena Kagan - Paul Clement used research based in part on Cameron's work to defend DOMA.)

Sadly, this kind of rhetoric shouldn't surprise.  The Tennessee Republican party is still racist, in 2012, so we shouldn't be surprised that the state government, run by Republicans, is also virulently anti-gay.  Just last year the Tennessee legislature, with the support of its Republican governor and businesses like Comcast, AT&T, FedEx and Blue Cross, repealed every gay and trans rights ordinance in the state, and banned cities across the state from ever passing another civil rights law ever again.

Tennessee is also the proud state where the Tennessee Tea Party, which is little more than a grouping of conservative Republicans, had this to say about Barney Frank's retirement:

TN GOP sends around press release referring to Obama as "Hussein" and showing him in traditional Muslim garb.

TN GOP staffer sends out photo of Obama as a "spook" ("spook" is a racist term to refer to black people).

Then there was the communications director of the TN GOP who distributed the Christmas carol "Barack the Magic Negro."
Or the time racist Tennessee Republicans passed a law that denied a 96 year old black women the right to vote.

Or the time an "unabashed racist" who believes in eugenics, according to AP, won the House primary in Tennessee.

And now Tennessee is trying to ban teachers, and counselors, from ever mentioning the g-word. Which should do wonders to stop schools from helping gay and trans kids who are being bullied.  Oh yeah, the TN GOP senator also had something to say about bullying:

"That bullying thing is the biggest lark out there."

"There are sexually confused children who could be pushed into a lifestyle that I don’t think is appropriate with them and it's not for the norm for society, and they don't know how they can get back from that. I think a lot of times these young teens and young children, they find it very hard on themselves and unfortunately some of them commit suicide."

Yes, the evil gays are forcing teens to kill themselves.

Welcome to Tennessee: America at its worst.
Posted by oreydc at 6:26 AM No comments: Links to this post