Via JMG: JC Penney: We Stand With Ellen


The American Family Association's campaign against JC Penney and Ellen DeGeneres has earned the AFA scornful media attention from around the world. For their part, JC Penney says they are proudly "standing behind our partnership with Ellen DeGeneres." Here's how E! covered the story last night.

RELATED: GLAAD is wisely capitalizing on the situation to point out that LGBT people can be fired just for being who they are in 29 states across the nation. ENDA! 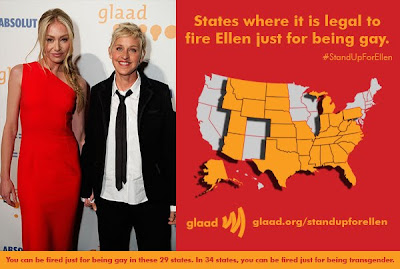 Via JMG: On Husbands

About seven years ago  JMG wrote this:


When gay marriage finally becomes widespread, how quickly (if at all) will we act to correct each other when we identify someone's significant other?

"There goes David and his husband."

Will we do that? Will we give those who choose not to marry a verbal downgrade to "just living together", to "just boyfriends"? Gay people have traditionally operated fast and loose with the rules of defining and naming our relationships.

Will there be a sense of relief then, as we convert to straight society's hierarchy of relationships and start identifying couples as: dating, living together, or married? I think that the implied legitimacy of a legal marriage will tempt many of our people to begin resorting relationships into those separate categories. And I don't know how I feel about that.

It took almost seven years, but this very thing happened to me last night as I was rather archly informed that the couple I'd referred to as "husbands" were not married. They've just lived together for 22 years.


F%$k that, they are husbands.

Posted by oreydc at 4:13 PM No comments:

- S. N. Goenka, "Finding Sense in Sensation"
Read the entire article in the Tricycle Wisdom Collection
Posted by oreydc at 7:36 AM No comments:

Via AmericaBlogGay: Rediscovering a Forgotten Hero

Known as the "invisible man" of the civil rights movement, Bayard Rustin was a mentor to Dr. Martin Luther King Jr. Artfully bringing Gandhi's techniques of nonviolence from India to America; Rustin organized the 1963 march on Washington D.C., the largest demonstration to date in American history. Rustin set the stage for a movement that captured the hearts and minds of millions of Americans. Yet despite his pivotal contributions, Rustin was expunged from history largely for being openly gay.

Beginning its 9th year, the Out at CHM series explores the contributions LGBT communities have made to Chicago and the nation. On Thursday, February 9, 2012, Chicago Urban League President Andrea L. Zopp moderates a discussion on Rustin’s enduring legacy with filmmaker Bennett Singer, co-director of the acclaimed documentary Brother Outsider: The Life of Bayard Rustin, and Rustin's surviving life partner Walter Naegle.

The evening will also explore how Rustin is being rediscovered by a new generation of Americans committed to social and economic justice. During the conversation, film clips from Brother Outsider will be shown to add context to the life of this unknown hero. For more information please visit chicagohitory.org
Posted by oreydc at 7:34 AM No comments: