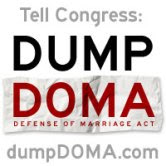 A rapidly growing number of Americans now live in states that grant the basic rights and responsibilities of marriage to same-sex couples. But DOMA prevents the federal government from recognizing any of these relationships!
Posted by oreydc at 6:20 PM No comments: Links to this post

- Chökyi Nyima Rinpoche, "Keeping a Good Heart"
Read the entire article in the Tricycle Wisdom Collection
Posted by oreydc at 9:30 AM No comments: Links to this post

Via AmericaBlogGay: Robin McGehee on "8, The Play": It was fun (but we shouldn't have to be doing this)

Note from Joe: Robin McGehee is a great friend of AMERICAblog's. We're big fans. She's the amazing activist who helped organized the National Equality March on Washington back in 2009, then founded GetEQUAL. Last night, she was in the audience for AFER's production of "8, The Play." Robin's activism started with Prop. 8, so she sent us her take on last night's event (along with some photos.)
If you missed the live broadcast, watch it here. It's worth it -- and remember, the haters don't want people to know what happened at the trial. The play begins at 29:51.
____________________________________
From Robin:
If you would have asked me a week ago if I was going to the American Federal for Equal Right's showing of "8" in Los Angeles - I would have replied, "I wish!" I am a full-time mom and professor at the College of the Sequoias in a small town called, Visalia, California. Although I am deeply devoted and in love with what AFER has done for the marriage equality fight in California, and globally for that matter, there is no way I could afford to get in.
Make the jump here ot read the full article
Posted by oreydc at 7:51 AM No comments: Links to this post