The Southern Poverty Law Center has issued an in-depth examination of the National Association for Research and Therapy of Homosexuality (NARTH), which the SPLC calls "the main source for anti-gay junk science." An excerpt:


The LGBT community is overwhelmingly the group most targeted in violent hate crimes, according to an Intelligence Report analysis of 14 years of federal hate crime data. Gay men, lesbians, bisexuals and transgender people are more than twice as likely to be attacked in a violent hate crime as Jews or blacks; more than four times as likely as Muslims; and 14 times as likely as Latinos. Despite this hate-inspired violence, anti-gay groups continue to employ virulent rhetoric that demonizes gay men and lesbians, some of it based on NARTH’s research.

This strategy of using science, however flawed, to fortify their religious condemnation of homosexuality was articulated five years ago by the Family Research Institute’s Paul Cameron, a psychologist whose research has been thoroughly discredited by mainstream scientists. “We can no longer rely — as almost all pro-family organizations do today — on gleaning scientific ‘bits’ from those in liberal academia. ... [W]e must subvert the academy by doing original, honest research ourselves,” Cameron wrote. Original, maybe. But honest? NARTH’s many critics argue otherwise.

Please take the time to read the full report.

ALSO RELATED: You might enjoy my slideshow of our protest at the 2010 convention: Douchebags Of NARTH.


The Catholic priest who refused communion to a lesbian at her mother's funeral has been suspended by the his diocese. But according to a spokesperson, the suspension is not directly related to the communion controversy.


Specific details about why the Rev. Marcel Guarnizo was barred from ministry – a severe penalty – were not immediately available. The Post learned of the action from a letter dated March 9 that is written to other archdiocesan priests. The letter from Bishop Barry Knestout, a top administrator in the archdiocese, which covers Washington and the Maryland suburbs, says the punishment was for “engaging in intimidating behavior toward parish staff and others that is incompatible with proper priestly ministry.” The archdiocese on Sunday confirmed Guarnizo's removal, and noted that Knestout's letter was read at all Masses this weekend at St. John Neumann.

Barbara Johnson claims that when she approached the altar, Rev. Guarnizo covered the bread and said, "Because you live with a woman, and in the eyes of the church, that is a sin." The Archdiocese has issued Johnson an apology.
Labels: Catholic Church, Maryland, religion
reposted from Joe
Posted by oreydc at 6:52 PM No comments: Links to this post

Equality Pennsylvania sends us this alert.

A vote on House Bill (HB) 1434 is scheduled for TUESDAY, MARCH 13 in the House State Government Committee. Now is the time to let your voice be heard. HB 1434, proposed by Rep. Daryl Metcalfe, would not only amend the Pennsylvania Constitution to define marriage as a legal union between one man and one woman, it would invalidate any other type of legal union or one substantially equivalent. That means any discussion of civil unions or domestic partnerships would forever be off the table for consideration. Passage of this legislation will also forcefully terminate benefits currently provided to thousands of employees in municipalities or state owned schools or facilities that offer domestic partnership benefits.

Pennsylvania residents: Contact your representatives. If you are free tomorrow morning:

Tuesday, March 13 9:00 am. Room G-50, Irvis Office Building (NEXT TO THE CAPITOL BUILDING) (Meet in the Capitol Rotunda at 8:30am.) Please be respectful. However, please come prepared to pack the room. Signs are welcome.

Labels: activism, GOP, LGBT rights, pennsylvania
reposted from Joe
Posted by oreydc at 6:49 PM No comments: Links to this post 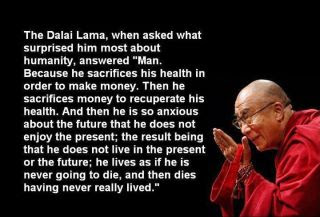 Posted by oreydc at 2:48 PM No comments: Links to this post

Where Will You Find Buddha?

- Bodhidharma, "The Snaggletoothed Barbarian"
Read the entire article in the Tricycle Wisdom Collection
Posted by oreydc at 10:49 AM No comments: Links to this post