Via JMG: Eliza Doolittle Would Approve 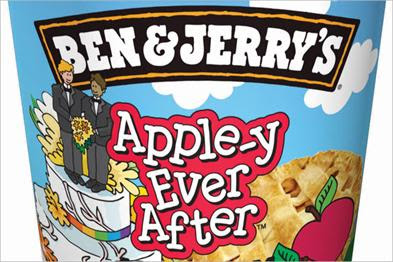 Ben & Jerry's has issued this Cockney flavor in the UK to support the marriage equality movement.

The ice cream maker is also teaming up with Stonewall to launch a new Facebook app today that asks users to ‘marry’ each other online. ‘Proposing’ through Ben and Jerry’s, users can voice their support for marriage equality and add their name to a letter to prime minister David Cameron backing the move. Laura Doughty, Stonewall’s Deputy CEO says “We’re truly moved by Ben and Jerry’s support for same-sex marriage in Britain. “All people want is to call their long-term relationship by the same name as everyone else. Our strong advice to those who disapprove of same-sex marriage is just not to get married to someone of the same sex.”

Labels: Ben And Jerry's, marriage equality, UK
reposted from Joe
Posted by oreydc at 8:42 PM No comments: Links to this post

Mr Blair's position is likely to anger the Vatican, which is alarmed at moves in both the UK and the US for same-sex unions. Senior church figures are also opposed to church blessings of same-sex civil partnerships. Mr Blair was responsible for pushing through laws on civil partnerships and lowering the age of consent for homosexuals to 16, but he has remained silent on the issue of gay marriage until now. When Mr Blair joined the Catholic Church, six months after leaving Downing Street, the Vatican's chief spokesman, Federico Lombardi, said his conversion "can only arouse joy and respect". He joined because his wife, Cherie, is a Catholic and their four children were brought up in the church. But Ann Widdecombe, the former Tory minister and also a Catholic convert, complained that his record as prime minister clashed with the church's teachings.

Both the Catholic Church and the Church of England have launched vigorous campaigns against same-sex marriage.
Labels: Britain, marriage equality, Tony Blair, UK
reposted from Joe
Posted by oreydc at 8:38 PM No comments: Links to this post


The Department of Health and Human Services is seeking public comment on a proposed plan to ease the ban on blood donations from gay men.

“[T]he increased effectiveness of donor testing for [Human Immunodeficiency Virus (HIV)], [Hepatitis B Virus (HBV)], syphilis and other infectious agents has greatly enhanced blood safety,” the department states in the notice, which will be published in the Federal Register Tuesday. “As a result, questions have been raised about the need to continue an indefinite deferral of all MSM and whether there could be blood donation by MSM who may not be at increased risk.” HHS specifically is calling on the public to evaluate how the department could design an “innovative and cost effective” pilot program to evaluate “alternative blood donor acceptance criteria for MSM.”

Anti-gay hate groups will surely urge their members to deluge the HHS with protests.
Labels: blood donation, feds, HIV/AIDS, science
reposted from Joe
Posted by oreydc at 8:38 PM No comments: Links to this post 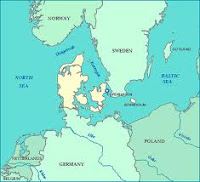 News seems to be breaking in Denmark that the Prime Minister today promised the legalization of same-sex marriage by June. A Twitter tipster points us to this early blog report:

The Danish Government is ready with the Law Proposal, which will take effect in June 2012. It is important step for our society, which recognizes the individual's differences and the individual's equality within the society, regardless of who you are, and regardless of who do you love, says PM Thorning. She calls the Law Proposal a completely natural and the right step in the moden Denmark. It will be up to individual priest though to decide, whether they would want to bless the homosexual couples in the church, the PM informs.

More on this when the Danish press weighs in. In 1989 Denmark was the world's first nation to offer federal domestic partnership recognition.

UPDATE: Here's a more formal announcement from the Danish press.

Gay couples can look forward to a church wedding this summer. At her weekly press conference, Tuesday, Prime Minister Helle Thorning-Schmidt said the government is putting the finishing touches to a bill that will come into force on June 15th, allowing homosexuals and lesbians to walk down the aisle in the church of their choice – if they can find a priest who’s willing to conduct the ceremony. “It will always be up to the individual priest as to whether he or she is prepared to bless gay couples but this legislation provides homosexuals with the same rights as heterosexuals,” said the PM.

Labels: Denmark, LGBT rights, marriage equality
reposted from Joe
Posted by oreydc at 8:36 PM No comments: Links to this post

Posted by oreydc at 8:33 PM No comments: Links to this post 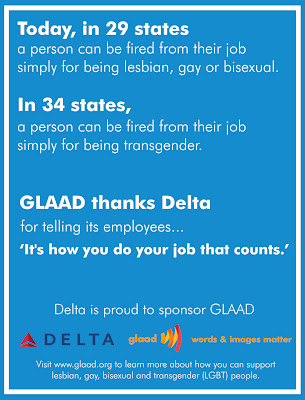 On my flight back from South Florida last week, I noticed the above ad in Delta's in-flight magazine. Today GLAAD issued a press release:

Millions of travelers from all across the globe will learn about the need for vital LGBT-inclusive workplace protections with the release of a new full-page ad appearing in this month’s issue of ‘Delta Sky Magazine.’ Delta Sky is the world’s most-read onboard magazine with a circulation of over 5 million and introduces readers to the people, places and subjects that define our ever-evolving world. The ad, which was created by GLAAD, also commends Delta for its ongoing commitment to equality. Delta Air Lines was designated as one of HRC’s ‘Best Places to Work’ for LGBT employees in 2011, and continues to earn near-perfect scores on HRC’s Corporate Equality Index. 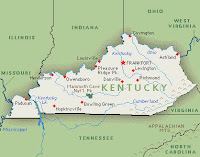 Republicans in the Kentucky House Education Committee today squashed an anti-bullying bill because it would help prevent gay children from killing themselves.


The vote came after parents and friends of teenagers who killed themselves to end incessant school bullying told lawmakers about the need for stronger protections for all students. Several lawmakers on the panel contended that existing anti-bullying laws are sufficient. Rep. Ben Waide, R-Madisonville, said House Bill 336 was an attempt "to achieve equality by making some people more equal than others." He said the measure was not about bullying, but "about gay rights in our schools."

Not even sobbing pleas from the parents of dead children can move these monsters.
Labels: bullying, education, GOP, Kentucky
reposted from Joe

Posted by oreydc at 8:12 PM No comments: Links to this post


Forty years ago the U.S. Supreme Court ruled that it should be legal for unmarried women to have access to birth control. And that, says the Family Research Council, is what started America down the slut-strewn road to gay marriage.

On March 22nd, 1972, the Supreme Court undermined the boundaries and benefits of marriage. In the decision Eisenstadt v. Baird, the Court struck down a Massachusetts law prohibiting the distribution of contraceptives to unmarried people, and implicitly sanctioned unmarried non-procreative sexual intimacy. While the decision may seem archaic and insignificant by modern sexual standards, Eisenstadt v. Baird dealt a decisive blow to the legal and cultural norm that marriage was the institution for the full expression of the sexual relationship between man and woman. The decision and its legal consequences affect us today. Forty years ago, the Court ruled that unmarried couples could not be denied their birth control. Today, the Federal government is forcing us to share the cost, for said contraception and some states are giving marital status to homosexual relationships.

- Aura Glaser, "Into the Demon's Mouth"
Read the entire article in the Tricycle Wisdom Collection
Posted by oreydc at 8:49 AM No comments: Links to this post