Posted by oreydc at 10:07 PM No comments: Links to this post 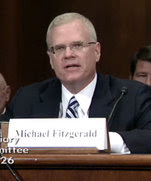 After months of obstructionism by the GOP, the U.S. Senate today finally approved President Obama's nomination of Michael Fitzgerald to the federal bench, making him the fourth openly gay federal judge in the nation. Chris Geidner reports at Metro Weekly:

Fitzgerald's confirmation will make him the first out LGBT Article III judge serving outside of New York City. Article III judges -- referencing the judicial powers detailed in the Constitution -- are nominated by the president, given consent by the Senate to serve and have lifetime tenure. The vote, which began a little after 2:24 p.m. today, came after Senate Majority Leader Harry Reid (D-Nev.) on Monday, March 12, announced that he would be forcing debate and votes on 17 of Obama's judicial nominees if no deal was reached. On Wednesday, March 14, an agreement was reached between the parties' leaders to have the Senate vote in the coming weeks on 14 of President Obama's judicial nominees -- including Fitzgerald.

Labels: Congress, feds, Senate
reposted from Joe
Posted by oreydc at 6:17 PM No comments: Links to this post

"What makes this so dangerous is despite what the labels say, the actual purchasing market for these games is often young males ages 11-16. This age group is not yet mature enough to not be impacted by these life decisions. There is no argument that video gaming is an extremely effective training tool. These young minds will be indoctrinated to homosexual relationships as normal lifestyles with homosexual characters being portrayed as heroes in warfare and in romantic situations." - American Decency Association board member Steve Ensley, who is ever so pissed about video game makers that allow users to create gay characters.

RELATED: Game maker Electronic Arts is among the many companies dubbed "cultural polluters" for introducing a Star Wars game with the option of gay players.

The latest attack on our culture from gaming is the result of a small, yet very vocal, group insisting that homosexual behaviors and lifestyles be introduced into a Star Wars game. If they are successful, their actions could further indoctrinate children into the belief that homosexual behavior is completely natural, before their minds have developed fully enough to make their own choices and decisions.

Labels: dumbassery, silliness, video games
Reposted from Joe
Posted by oreydc at 4:07 PM No comments: Links to this post

How To Sell Floors To Gay Men? 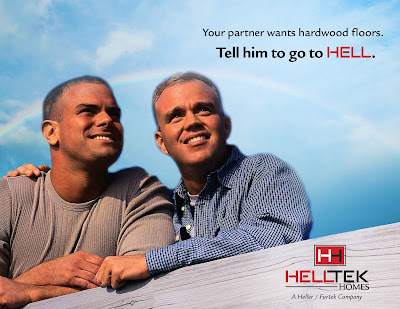 Via Copyranter.
Labels: advertising, Copyranter
reposted from Joe
Posted by oreydc at 1:22 PM No comments: Links to this post 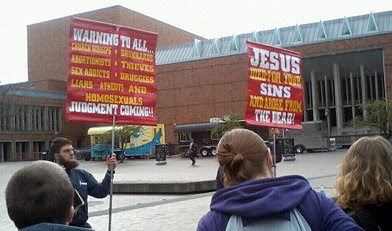 Slog's Dominic Holden posts the message that came with the above photo.

Last week the University of Washington's FoQus group for Queer Students held a food drive for the Lifelong Aids Alliance. We raised a lot of money and food that they desperately needed, all the while being picketed, loudly, in the middle of Red Square by church folk, who were yelling that people with AIDS did not deserve to eat, condoms would not save you from hell, and that "Queers shall experience hell, along with the drunkards, druggies, STD havers, and church gossips!" While it was horrible to hear them say as many homophobic things as they did, we'd really like to thank them for picketing so hard, because so many people came up to us and handed us a lot of cash and food donations, just to piss them off.

ToMyUnbornChild... I'll put a bullet in your damn skull" (if you turn out gay)


Twitter has become an amazing tool for conversation, sometimes becoming my own main mode of communication throughout the day in fact. It also has its downside though, because wherever there is an attempt at open dialogue, there will surely be some degree of inflammatory, upsetting, and sometimes unimaginably horrific speech to go along with it.

This kind of hate speech has most recently come from "To My Unborn Child" trending topic, which soon turned into a disgusting ranting space for anti-gay bigots. The Twitter account @Homophobes (which retweets public homophobic tweets to its 4,500 followers) created a post at Storify (a site where users can bundle tweets onto one page and add commentary to create a story) to document over 100 tweets of mostly young men and women saying they would murder their future child if he or she was gay.

Read for yourself, but be warned: the tweets are horrible and disgusting. But perhaps most tragically, they are a look at people who would so openly hate a gay child yet to be even born.

Posted by oreydc at 10:42 AM No comments: Links to this post