Posted by oreydc at 11:05 PM No comments: Links to this post 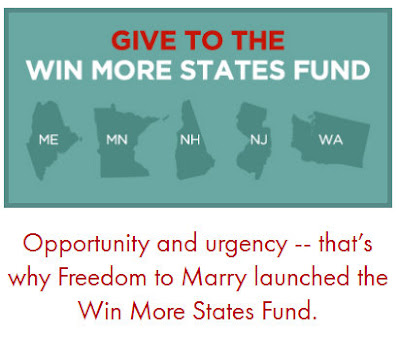 Today Freedom to Marry announced the Win More States Fund to raise at least $3 million dollars, every penny of which will be spent directly on the work of winning in five 2012 marriage battleground states: Maine, Minnesota, New Hampshire, New Jersey, and Washington. “Winning marriage at the ballot in even one state will take away the last desperate talking-point our opponents use to disparage the gains we are making across the country,” said Evan Wolfson, founder and President of Freedom to Marry, the campaign to win marriage nationwide. “In each of our battleground states, Freedom to Marry is taking a lead role alongside local families and leaders, adding talent and resources on the frontlines to do the critical work necessary to win.”

With five states on the 2012 ballot, it's almost a rerun of 2004. This time, however, three of the state battles can end in legalization.
Labels: 2012 elections, Freedom To Marry, LGBT rights
reposted from Joe
Posted by oreydc at 6:41 PM No comments: Links to this post

The government of Finland has begun debating a bill that would legalize same-sex marriage.

Considered one of the most conservative Nordic nations, there is already a relationship register in the country for same-sex couples, which has been in place since 2002. The new amendment would end the separation between heterosexual marriages and same-sex partnerships and allow all couples to share a surname and adopt children. The amendment would have no bearing on religious groups, and would only redefine civil marriages. The Finnish Parliament have now sent the initiative to the Parliament’s Legal Affairs Committee, where its passage is uncertain. The draft amendment was signed by 76 of the 200 members of Parliament, with more lawmakers including Prime Minister Jyrki Katainen expected to vote for it, Reuters reports.

Earlier this week Madonna vowed to break St. Petersburg's new "don't say gay" law during her coming concert. Today the bill's author declared that he will be at the venue and will charge Madonna, should she break the new law against promoting homosexuality.

The law, which took effect March 11, in part prohibits “the propaganda of homosexuality and pedophilia among minors.” Gay rights activists say it would criminalize even reading, writing or speaking about gay, lesbian, or transgender people. Violations can carry hefty fines, ranging from about $170 for individuals up to $16,700 or organizations and businesses. The bill’s author, city assemblyman Vitaly Milanov, says he wants Madonna charged under the new law if she speaks out against it during her concert. He said he was willing to attend the show “to control its moral content.” “I’m ready to personally suffer a couple of hours of her concert,” he told the Russian Interfax news agency.

Some Russian LGBT activists have denounced Madonna's refusal to cancel. Famed activist Nikolai Aleksev:"“The law will stay in force, Madonna will leave and the Russian LGBT community will be humiliated even more." Other gay groups say they welcome any attention Madonna can bring to their plight.
Labels: gay icons, LGBT rights, Madonna, Russia
reposted from Joe
Posted by oreydc at 6:34 PM No comments: Links to this post

- Matthieu Ricard, “Working with Desire”
Read the entire article in the Tricycle Wisdom Collection
Posted by oreydc at 7:24 AM No comments: Links to this post