"I have concluded through careful, empirical analysis and much thought that somebody is looking out for me. Keeping track of what I think about things, forgiving me when I do less then I ought, giving me strength to shoot for more than I think I am capable of. I believe they know everything that I do and think and they still love me and I’ve concluded after careful consideration that this person keeping score is me." - Mythbusters host Adam Savage, speaking at the Reason Rally.

RELATED: Head over to The Friendly Atheist for a massive recap of the Reason Rally. Videos, photos, quotes.
Labels: atheism, Quote Of The Day, religion
Reposted from Joe
Posted by oreydc at 8:23 PM No comments:

The Gay Debate: The Bible and Homosexuality

“The strategic goal of the project is to drive a wedge between gays and blacks — two key Democratic constituencies,” reads a portion of the memo, describing an initiative called the “Not a Civil Right Project.” The project’s goal, according to the memo, is to recruit blacks who oppose gay marriage to serve as spokespeople for the group, then “provoke the gay marriage base into responding by denouncing these spokesmen and women as bigots.” Another initiative, described under the heading “Internationalizing the Marriage issue: A Pan-American Strategy,” is to convince Hispanic voters that efforts to legalize gay marriage would force them to assimilate to “the dominant Anglo culture.” The memo suggests that the strategy was inspired by successful efforts to outlaw same-sex marriage by initiative in California in 2008, when the measure passed with strong support from black voters, who turned out heavily to support Barack Obama for president. Brian S. Brown, executive director of the National Organization for Marriage, did not immediately return a call for comment on Tuesday.

Visit msnbc.com for breaking news, world news, and news about the economy
Posted by oreydc at 7:00 PM No comments: 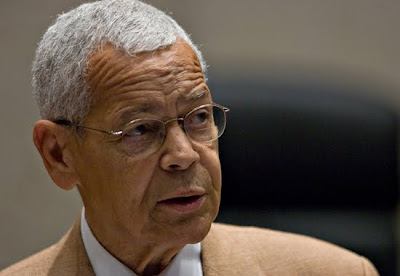 "NOM's underhanded attempts to divide will not succeed if Black Americans remember their own history of discrimination. Pitting bigotry's victims against other victims is reprehensible; the defenders of justice must stand together." - Julian Bond, Chairman Emeritus, NAACP.
Labels: Julian Bond, NAACP, NOM, racism
Reposted from Joe
Posted by oreydc at 6:49 PM No comments:

Via JMG: Quote Of The Day - SPLC's Mark Potok

"Black folks, this is a message for you: The National Organization for Marriage (NOM), the country’s preeminent group fighting against same-sex marriage, really, really likes you. They even want to make some of you famous! Have NOM’s principal leaders, former president Maggie Gallagher and current leader Brian S. Brown, stood up for African Americans before? Well, not so much. But it turns out that they’ve decided that you’re actually very important. [snip]

"NOM isn’t the first organization to use such cynical marketing ploys, schemes that seem to have little do with the interests of the people they claim to represent, and it certainly won’t be the last. But the revelation of its bald attempt to exploit black people and Latinos should help end the idea that NOM is an honorable group that would never engage in race-baiting. Because that is precisely what it has done." - Southern Poverty Law Center spokesman Mark Potok, writing on the SPLC's site. (Tipped by JMG reader Fritz)
Labels: hate groups, NOM, Quote Of The Day, racism
Reposted from Joe
Posted by oreydc at 6:47 PM No comments:

- Sulak Sivaraksa, “In Exile from Siam”
Read the entire article in the Tricycle Wisdom Collection
Posted by oreydc at 11:04 AM No comments:

Secret documents reveal NOM strategic goal "to drive wedge between gays and blacks"
It's not like we didn't think this was happening, but, wow, it's really ugly to see it in writing. As John notes on the main AMERICAblog home page, the religious right wanted to fan a race war, and they admitted it in writing.  Ben Smith at Buzzfeed calls the documents "explosive".
Earlier tonight, Alvin McEwen tipped me off about some court documents that revealed NOM's strategy. It's ugly. From Alvin:
The National Organization for Marriage's unsuccessful fight to skirt Maine's financial disclosure laws just backfired majorly on the group by revealing a distasteful part of its game plan to stop marriage equality.
According to a court document that was uploaded online, NOM specifically worked to drive a wedge between the black and gay community on the subject of marriage equality
Here's the key passage about gays and blacks (and there's also a strategy for Latinos):
The strategic goal of this project is to drive a wedge between gays and blacks - two key democratic constituencies. We aim to find, equip, energize and connect African American spokespeople for marriage; to develop a media campaign around their objections to gay marriage as a civil right; and to provoke the gay marriage base into responding by denouncing these spokesmen and women as bigots. No politician wants to take up and push an issue that splits the base of the party. Fanning the hostility raised in the wake of Prop 8 is key...
They mean hostility between African-Americans and white gays.
The full document is below. (John links to a second confidential NOM document that is similar to this one, but also includes the "fanning the hostility" phrase. There seem to be at least three different documents.)
Jeremy Hooper and HRC's NOM Exposed are on top of this, too.
And, as for NOM and Latinos, read the post from Dr. Gary Segura, who runs Latino Decisions polling firm -- and was an expert witness in the Prop. 8 case and several DOMA cases. He noted:
For starters, Latinos are far more liberal on marriage equality than stereotypes might suggest.
This has the potential to be a very big story. Ben Smith at BuzzFeed has already picked up the story.
Nom Depo Exhibit 28
Posted by oreydc at 9:38 AM No comments: