Via JMG: Anti-Gay Liberian Christians Publish Hit List: "We Will Get Them One By One" 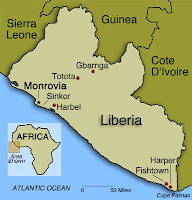 As a bill that worsens the penalty for homosexuality wends its way through Liberia's legislature, an anti-gay Christian group has published a hit list in which they vow to track down every gay person for brutal punishment.

The fliers include this threat: "Let these individuals be aware that we are coming after them soon. We urge them to also begin saying the Lord’s Prayer.”

The fliers distributed over the weekend in parts of Liberia’s capital were signed by the Movement Against Gay’s in Liberia, or MOGAL. The group said those involved in promoting gay rights “should not be given space to get a gulp of air.” “Having conducted a comprehensive investigation, we are convinced that the below listed individuals are gays or supporters of the club who don’t mean well for our country,” the fliers read. “Therefore, we have agreed to go after them using all means in life.” No individual members of MOGAL signed the flier. But Moses Tapleh, a 28-year-old resident of the main community where the flier was distributed, said he was affiliated with the group and stressed that its threats should be taken seriously. “We will get to them one by one,” Tapleh said. “They want to spoil our country.” Asked what specific action might be taken against those on the list, he said they could be subjected to “dangerous punishments” including “flogging and death.”

One of the persons named on the list said he has already received death threats by phone. Last month Liberian President Ellen Sirleaf Johnson, a 2011 Nobel Peace Prize laureate, refused to consider decriminalizing homosexuality, but said she would not sign the new bill to worsen the penalty to ten years in prison.
Labels: Christianists, gay death penalty, hate groups, LGBT rights, Liberia, religion
Reposted from Joe
Posted by oreydc at 5:05 PM No comments:

Posted by oreydc at 5:02 PM No comments:

Posted by oreydc at 5:01 PM No comments: