Posted by oreydc at 2:33 PM No comments:

Via JMG: Bully Has Been Re-Rated PG-13


While some theaters have agreed to run the film without a rating, yesterday word came that Bully has been re-rated PG-13, a move made without cutting what some consider the film's most crucial scene. The film studio exults via press release:

This decision by the MPAA is a huge victory for the parents, educators, lawmakers, and most importantly, children, everywhere who have been fighting for months for the appropriate PG-13 rating without cutting some of the most sensitive moments. Three uses of the 'F word' were removed from other scenes, which ultimately persuaded the MPAA to lower the rating. Hirsch made the documentary with the intent to give an uncensored, real-life portrayal of what 13 million children suffer through every year.

The re-rating came after hundreds of thousands signed an internet petition to the MPAA.
Labels: bullying, education, LGBT youth, movies
Reposted from Joe
Posted by oreydc at 12:16 PM No comments:

Via JMG: Born That Way 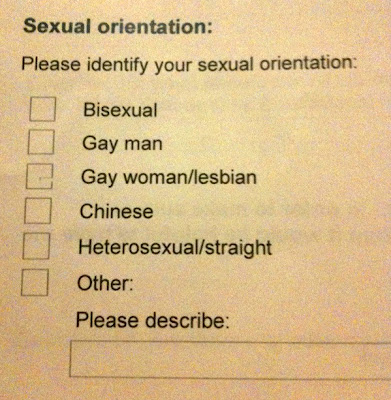 Allegedly from a college survey form. Some of the comments on Reddit are quite amusing. "I've been Chinese all my life, Mom! You can't change who I am!"
Labels: Buzzfeed, college, silliness
Reposted from Joe
Posted by oreydc at 12:13 PM No comments: 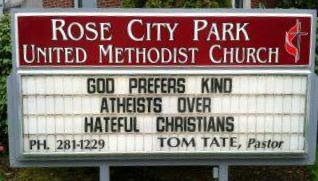 This sign has gone viral in the past couple of days and has even appeared on Glenn Beck's "news" site The Blaze:

While the message may be a tough pill to swallow for some Christians who believe that non-belief is a tragic societal occurrence — even more tragic than Christians behaving badly — Kay Pettygrove, an administrator at the church, says that positivity has been the predominate sentiment. Pettygrove claims that there has been 30 positive comments for each negative one and says that the church is “flabbergasted” over the response. “I got an email from a young Mormon man saying, ‘Thank you so much. It made me rethink how I treat people,’” she explains. “Many atheists have said, ‘If there were more churches like yours, we would probably reconsider.’”

- Thanissaro Bhikkhu, "The Dignity of Restraint”
Read the entire article in the Tricycle Wisdom Collection
Posted by oreydc at 12:05 PM No comments: