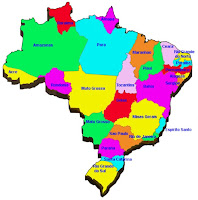 The Daily Beast reports on the surging number of anti-gay murders in Brazil:

Though the overall crime rate is down sharply in major cities, murders of gays and lesbians are on the rise. It’s especially acute in the most populous areas: Bahia, Minas Gerais, and the cities of Rio de Janeiro and São Paulo—precisely where police have made their biggest dents in criminal activity in general. Attacks against gays have climbed steadily for most of the last decade, with 272 murdered in 2011—one every 36 hours, according to Grupo Gay da Bahía, a leading gay-rights group that tracks antigay violence.

This year, GGB reports, it’s even worse, with 75 murders in just the first 10 weeks. That’s one every 24 hours. The antigay surge may come as a double surprise. After all, Brazil is not just famous for its bonhomie, it's also home to one of the best-organized gay-rights movements anywhere, whose activists pride themselves in rolling out the biggest gay-pride parade in the world. But success has its price. As homosexuals have won a place for themselves, they also have become visible targets

Via JMG: Homophobes Are Gay


Nothing we didn't know, but interesting to read.

Homophobia is more pronounced in individuals with an unacknowledged attraction to the same sex and who grew up with authoritarian parents who forbade such desires, a series of psychology studies demonstrates. The study is the first to document the role that both parenting and sexual orientation play in the formation of intense and visceral fear of homosexuals, including self-reported homophobic attitudes, discriminatory bias, implicit hostility towards gays, and endorsement of anti-gay policies. Conducted by a team from the University of Rochester, the University of Essex, England, and the University of California in Santa Barbara, the research will be published the April issue of the Journal of Personality and Social Psychology. "Individuals who identify as straight but in psychological tests show a strong attraction to the same sex may be threatened by gays and lesbians because homosexuals remind them of similar tendencies within themselves," explains Netta Weinstein, a lecturer at the University of Essex and the study's lead author.

You might be amused by Free Republic comments on this story. (Tipped by JMG reader Charlie)
Labels: homophobes, science, sexuality
Reposted from Joe
Posted by oreydc at 6:01 PM No comments: Links to this post

Via JMG: Sen. John Kerry Advocates On Behalf Of Married Lesbian Who May Be Deported


The Washington Blade reports that Sen. John Kerry is working to block the deportation of a Pakistani woman who married her wife in Massachusetts.


In a redacted letter dated March 27 and obtained Friday by the Washington Blade, Sen. John Kerry (D-Mass.) asks Secretary of Homeland Security Janet Napolitano to hold in abeyance the I-130 marriage-based green card petition for the couple until the Defense of Marriage Act is overturned either by Congress or the courts. “I know that you and I both believe that every family is worthy and recognition and respect, and that no family should be torn apart based on a discriminatory law,” Kerry writes. “Abeyance will allow this remarkable young couple to move forward with their dream of building a life together at home in Massachusetts.”

The American half of the couple notes: "It hurts, as an American, to think that my government causes me and my wife so much distress by allowing DOMA to do so much harm. It is not what I expected of President Obama; I expected more."
Labels: DOMA, Immigration Equality, John Kerry
Reposted from Joe
Posted by oreydc at 5:46 PM No comments: Links to this post

Posted by oreydc at 5:40 PM No comments: Links to this post

Via JMG: The Straight Liberation Movement 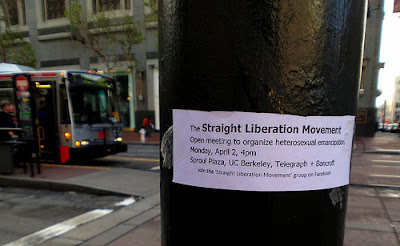 JMG reader Mark writes to tip us that somebody calling themselves the Straight Liberation Movement has been posting flyers around the SF Bay area. A sample posting from the group's Facebook page:

The discussion outside the anarchist bookfair yesterday entitled, "What is the Straight Agenda" was attacked by queers repeatedly. All fliers put up in the bookfair building were taken down, including by members of Homes Not Jails, who were trying to prevent the heterosexual afterparty from happening. The cardboard sign with the agenda on it was reapeatedly attacked by queers who tried to rip it... down, and managed to tear it in half at the end. The Sheriffs intervened to defend me, as did the bookfair organizers to their credit. The Straight Liberation Movement facebook group is also being sabotaged--about half a dozen people who asked to join were erased before they could be added, apparently by someone who knew my password. Straight people: overthrow the gay occupation of your society! Join the SLM.

This could be just another Poe operation. One the other hand, in 2010 somebody with the same relatively uncommon name as the group's Facebook moderator was dragged out of a Bellingham, Washington city council meeting and arrested after screaming that a local car repair shop had decapitated his mother and was keeping her head alive "in order to torture her."
Labels: crackpots, mental illness, San Francisco
Reposted from Joe
Posted by oreydc at 5:37 PM No comments: Links to this post

- Shinso Ito, “Unconditional Service”
Read the entire article in the Tricycle Wisdom Collection
Posted by oreydc at 8:43 AM No comments: Links to this post