In a fascinating study, researchers say that the number of Wal-Mart locations in any particular region tends to correlate with the number of SPLC-certified hate groups.

The number of Wal-Mart stores was second only to the designation of a county as a Metropolitan Statistical Area in statistical significance for predicting the number of hate groups in a county, according to the study. The researchers, who reported their findings in the online version of Social Science Quarterly, said that the number of Wal-Mart stores in a county was more significant statistically than factors commonly regarded as important to hate group participation, such as the unemployment rate, high crime rates and low education.


Researchers say they are not singling out Wal-Mart in particular and that other big box retailers likely have a similar effect on "community cohesion."
Labels: hate groups, science, Wal-Mart
Reposted from Joe
Posted by oreydc at 7:55 PM No comments: Links to this post

JMG Editorial Of The Day

WHITE HOUSE press secretary Jay Carney spent a good chunk of his time during a briefing last week trying to explain why President Obama has declined to issue an executive order barring federal contractors from discriminating on the basis of sexual orientation. Mr. Carney struggled for some eight minutes but was unable to give a satisfactory answer. That’s understandable, because there is no principled reason for refusing to extend such workplace protections to millions of Americans. [snip] The president played a pivotal role in the repeal of “don’t ask, don’t tell” and also deserves credit for refusing to defend the discriminatory Defense of Marriage Act. He should again seize the mantle of leadership by issuing an executive order that prohibits the federal government from doing business with contractors that fail to guarantee basic fairness to their LGBT employees.

Labels: Barack Obama, employment, ENDA, WaPo
Reposted from Joe
Posted by oreydc at 7:40 PM No comments: Links to this post

Via JMG: What's Important To Voters 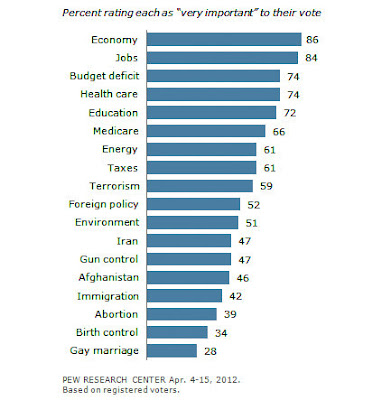 Crazy shit via JMG: Wingnut Site Of The Day 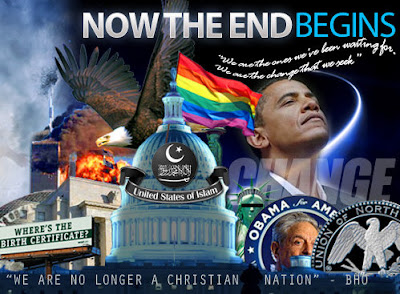 Via JMG: Day Of Silence: Then And Now

We dug up some old photos from Day of Silence back in the day. Look how far we've come! We're so proud of everyone who participates in Day of Silence each year, working together to end the bullying and harassment that LGBT students face in school each day. Together, we're building safer schools!

Labels: bullying, Day Of Silence, GLSEN, LGBT youth
posted by Joe
Posted by oreydc at 7:02 PM No comments: Links to this post

White House spokesman Shin Inouye tells Metro Weekly, "The President and his Administration have taken many steps to address the issue of bullying. He is proud to support the Student Non-Discrimination Act, introduced by Senator Franken and Congressman Polis, and the Safe Schools Improvement Act, introduced by Senator Casey and Congresswoman Linda Sanchez. These bills will help ensure that all students are safe and healthy and can learn in environments free from discrimination, bullying and harassment." The SSIA would amend the Safe and Drug-Free Schools and Communities Act to include bullying- and harassment-prevention programs, including ones based on sexual orientation or gender identity. The SNDA, modeled after Title IX, would add sexual orientation and gender identity to federal education nondiscrimination law.

Tonight the White House is also screening the movie Bully to an audience of community activists. Reactions from LGBT rights groups are below.

"Today is a day that I have hoped for since I began my work as an anti-bullying advocate after losing my son Carl," said Sirdeaner Walker. "I believe that President Obama's explicit endorsement of the Safe Schools Improvement Act will make a tremendous difference in moving this issue forward. Having met with the President three times, I knew his support for SSIA and the Student Non-Discrimination Act was genuine. But stating that publicly on GLSEN's Day of Silence pushes it to a whole new level. While nothing can bring Carl back, I know that these bills can make a real difference to end the bullying and harassment that is faced by too many other sons and daughters today."

“We thank President Obama for endorsing the Safe Schools Improvement Act and Student Non-Discrimination Act. The epidemic of bullying and discrimination in our nation’s schools is a tragedy and an outrage. No student should fear getting beaten up, harassed and tormented while simply trying to get an education. We have a responsibility to ensure all young people are protected from this pervasive bullying, discrimination and abuse. Parents, educators, policymakers — all of us — need to stand against this unacceptable behavior. The president did that today. We urge him to now help get these life-saving bills through Congress.”

"We applaud the Obama administration for endorsing this critical piece of legislation. We thank Sen. Al Franken,Rep. Jared Polis, Rep. Barney Frank and Rep. Tammy Baldwin and over 50other current sponsors for their leadership on this bill and we urge Congress to pass it. At Lambda Legal, we've encountered extraordinary cases of violence and discrimination against LGBT young peoplein schools - and sometimes against the allies who try to support them. The Student Non-Discrimination Act takes a big step toward a safer and healthier environment in every public school."

“Having the White House stand behind the Student Non-Discrimination Act is key to getting this necessary legislation passed into law,” said Ian Thompson, ACLU legislative representative. “Our public schools should be a safe harbor for our youth, not a place of exclusion and ridicule. By passing the Student Non-Discrimination Act, Congress can have a profound and very real impact in improving the lives of LGBT students. It’s time to make passage of this bill a priority.”

“The President’s endorsement of the SNDA and SSIA recognizes the importance of providing LGBT students with the same civil rights protections as other students,” said HRC President Joe Solmonese. “No student should feel scared when walking into their school and these bills would address the discrimination and bullying that our youth have endured for far too long.”

Cutting the Roots of Craving

- The Buddha, "From the Canon: Thirst"
Read the entire article in the Tricycle Wisdom Collection
Posted by oreydc at 10:52 AM No comments: Links to this post

Vatican launches attack on U.S. nuns for not being homophobic

Posted about the Vatican attack on the U.S. nuns for not being anti-gay enough at AMERICAblog. To complete the homophobic circle, the Archbishop of Seattle, J. Peter Sartain, who is leading the jihad against the nuns, is also leading the effort to repeal Washington State's new marriage equality law. But, this past weekend, a number of parishes rejected the Archbishop's edict to collect signatures for an anti-marriage referendum. In fact, via Igor Volsky at Think Progress, we learned that one Catholic priest got a standing ovation from his parishioners by announcing he wouldn't participate in the effort to gather signatures for an anti-marriage petition.
Posted by oreydc at 10:51 AM No comments: Links to this post