Posted by oreydc at 3:49 PM No comments: Links to this post

Posted by oreydc at 3:26 PM No comments: Links to this post 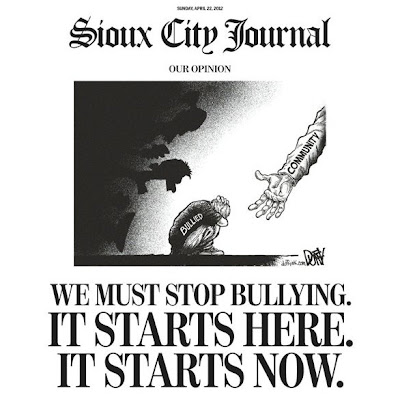 JMG reader Alan points us to this AP story:

In a rare and forceful act of advocacy, an Iowa newspaper devoted the entire front page of its Sunday edition to an anti-bullying editorial after a gay teen committed suicide. Relatives have said 14-year-old Kenneth Weishuhn Jr. suffered intense harassment, including threatening cellphone calls and nasty comments posted online, after coming out to family and friends about a month ago. He died April 15 from what the local sheriff's office described only as a "self-inflicted injury." The Sioux City Journal's front-page opinion piece calls on the community to be pro-active in stopping bullying and urges members to learn more about the problem by seeing the acclaimed new film, "Bully," which documents the harassment of a Sioux City middle school student. It notes that while many students are targeted for being gay, "we have learned a bully needs no reason to strike."

Hit the link for the full editorial.
Labels: bullying, Iowa, LGBT youth, newspapers
Reposted from Joe
Posted by oreydc at 3:17 PM No comments: Links to this post

Via JMG: Bright Side: Romney's New Homocon Is Infuriating The Talibangelicals 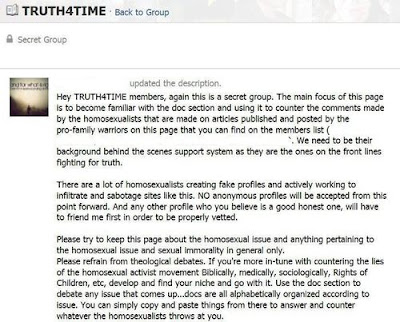 Fellow blogger Alvin McEwen has uncovered a secret Facebook group whose members share tips on how to flag and take down gay blogs, Facebook pages, and YouTube clips that they find contrary to the Christianist cause. According to McEwen, among the group's members are well-known religious leaders and anti-gay activists.

Based upon information I received from an anonymous source, there is a project afoot by members of the religious right to strike at the gay community via sites like Youtube, Twitter and Facebook. This project is conducted by a secret Facebook group called Truth4Time. According to the creator of the group (whose name shall remain anonymous because he is not a public figure), Truth4Time is supposed to be a library of anti-gay articles, blogs, and other materials for its members to use in their fight against the supposed "gay agenda." Apparently the group has a large lists of documents which contains anti-gay information (i.e. propaganda) that members are invited to use. The founder says that the group is supposed to be a sort of a "behind the scenes support system for the religious right. He seems to think that he is on some type of divine mission.

Hit this link for sample postings from the group, which is apparently invisible to non-members. McEwen has redacted their names because some members are private citizens. He also notes that the group is particularly focused on JMG. Because I'm in cahoots with Satan!

Labels: Christianists, Facebook, internet, religion
reposted from Joe
Posted by oreydc at 3:05 PM No comments: Links to this post

The Koans of Life

- Maezumi Roshi, "Appreciate Your Life"
Read the entire article in the Tricycle Wisdom Collection
Posted by oreydc at 10:15 AM No comments: Links to this post

Posted by oreydc at 10:13 AM No comments: Links to this post