The "ex-gay" industry has been rocked to its core this year. First the head of its most infamous group announced that not one person had ever actually been "cured." Then the researcher who authored the most widely cited "ex-gay" study recanted his findings and apologized to the gay community. So maybe it's not surprising that nobody wants to attend an "ex-gay" convention.

In what seems like the logical extension of the recent trend, Exodus International has decided there were not enough people interested in attending their Love Won Out conference scheduled for later this month to justify the expense. Conference attendance has been trending downward, with their last conference bringing in barely 400 people. This is down from nearly 1000 in Exodus’ headier days. In November, XGW reported on a secret meeting held by Exodus president Alan Chambers to come up with ways to rebrand the organization in the wake of social and financial collapse. Since then events have occurred which seem to validate that scenario. The cancellation of this conference, the first time we know of since either Exodus or Focus on the Family held the event, appears to provide more evidence of their decline.

As everybody here doubtlessly knows, "ex-gay" therapy is a con job, a scam, a cash-cow designed to separate self-hating homosexuals from their money. It's sort of brilliant, really. You're never "cured" so you just have to keep paying and paying and paying. It's like Jenny Craig, but without the delicious cardboard aftertaste.

Via JMG: The Avengers Plus One 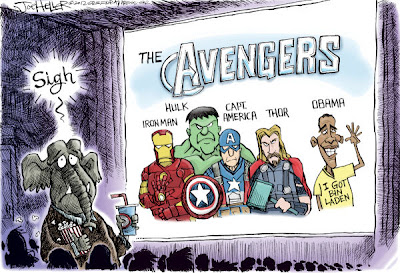 
reposted from Joe
Posted by oreydc at 11:12 PM No comments: Links to this post

Today would have been Keith Haring's 54th birthday.


Reposted from Joe
Posted by oreydc at 11:10 PM No comments: Links to this post


Slate writer Amanda Marcotte gets to the root of it:

The American right is undertaking a huge project of trying to put right-wing politics beyond criticism by shouting "religious bigotry" any time someone gets in the way of their political agenda. If they can create a consensus that it's somehow off-limits to criticize teaching that gay people are subhuman as long as you wrap it up in religion, that gives them a huge political advantage. Taken far enough, merely stating out loud in public that you don't believe gay people are evil could be cause for the fainting couches to be pulled out and accusations that Christians are being oppressed. Sounds ludicrous? Well, consider that we're currently debating whether or not it's oppressing Christians to accurately state what's in the Bible. Anyone who is actually supportive of gay rights shouldn't be playing along with this feigned umbrage. It won't stop until opposing anti-gay actions is considered completely off-bounds on the grounds that it's an attack on religion.


Reposted from Joe
Posted by oreydc at 11:03 PM No comments: Links to this post

The wife of a North Carolina state senator, who's supporting the anti-gay Amendment One in the state (a constitutional amendment that will ban gay marriage, civil unions, and domestic partners) reportedly told a poll worker that the amendment is intended to help protect the caucasian race from all those dark people who keep multiplying.  The woman allegedly disagrees with the report, says her remarks were taken out of context, but admits to using the word "caucasian."  She probably said: "I would never use the word 'caucasion' as that might sound racist."  Uh huh.

Posted by oreydc at 11:49 AM No comments: Links to this post

Don't Get Mad, Don't Get Even

- Master Hsing Yun, "Don't Get Mad, Don't Get Even"
Read the entire article in the Tricycle Wisdom Collection
Posted by oreydc at 10:44 AM No comments: Links to this post