Posted to YouTube today in its entirety. Moisés Kaufman and members of New York's Tectonic Theater Project went to Laramie, Wyoming after the murder of Matthew Shepard. This is a film version of the play they wrote based on more than 200 interviews they conducted in Laramie. It follows and in some cases re-enacts the chronology of Shepard's visit to a local bar, his kidnap and beating, the discovery of him tied to a fence, the vigil at the hospital, his death and funeral, and the trial of his killers. It mixes real news reports with actors portraying friends, family, cops, killers, and other Laramie residents in their own words. It concludes with a Laramie staging of "Angels in America" a year after Shephard's death.

Reposted from Joe
Posted by oreydc at 6:33 PM No comments:

Via JMG: The Cost Of Gay Marriage Bans

Posted by oreydc at 6:30 PM No comments:


The Ninth Circuit Court of Appeals has issued an alert that a ruling will come tomorrow on whether to rehear Prop 8 with a larger panel of judges. Insiders speculate:

KQED's Scott Shafer said this is almost surely the decision on whether to rehear the case en banc. An en banc panel is made up of 11 judges, chosen at random from the circuit. If the 9th Circuit denies the request, Prop 8 supporters will almost certainly ask the United States Supreme Court to hear the case. Proponents of Prop 8, California's same-sex marriage ban, asked the 9th Circuit for the en banc review in February, after a ruling by a three-judge panel upheld Judge Vaughn Walker's 2010 decision striking down the law as unconstitutional.

Prop 8 Trial Tracker has more on what could happen.


Reposted from Joe
Posted by oreydc at 6:18 PM No comments:

Government should treat all citizens impartially, without regard to wealth, race, ethnicity, disability, religion, sex, political affiliation or national origin. We oppose all forms of invidious discrimination. Sexual orientation is not an appropriate category.


Reposted from Joe
Posted by oreydc at 6:14 PM No comments: 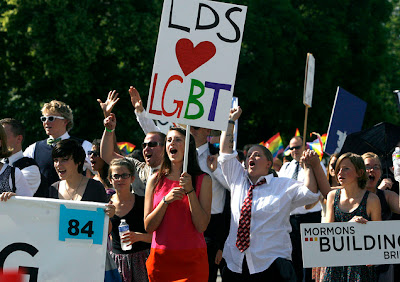 Hundreds of straight Mormon allies marched yesterday in Salt Lake City's gay pride parade. Before the drag queens in heels danced across Main Street, more than 300 members of the LDS Church left Utah Gay Pride Parade spectators in tears Sunday morning. One Mormon father turned to the crowd and thanked people for forgiving him. The group, Mormons Building Bridges, said they wanted to send a message of love to the state’s LGBT community, a message they believe is compatible with their faith. Emily Vandyke, 50, carried a sign with the words from an LDS children’s song: "I’ll walk with you, I’ll talk with you. That’s how I’ll show my love for you." Several blocks along the parade route, she embraced a tall woman weeping at the edge of the crowd who said, "Thank you." "I haven’t recognized them as equals," Vandyke said a few minutes later. "They have been invisible to me." Later, parade Grand Marshal Dustin Lance Black, tweeted: "In tears. Over 300 straight, active Mormons showed up to march with me at the Utah Pride parade in support of LGBT people."

Reposted by Joe
Posted by oreydc at 9:49 AM No comments:

When asked "Would it be fair if a transgender woman won the Miss USA title," Culpo responded, "I do think it would be fair..." because "there are so many people who have a need to change for a happier life. I do accept that because I believe it's a free country." The crowd erupted with cheers.

Reposted from Joe
Posted by oreydc at 9:39 AM No comments:

- Stephen Schettini, "What to Expect When You’re Reflecting"
Read the entire article in the Tricycle Wisdom Collection
Posted by oreydc at 7:08 AM No comments: