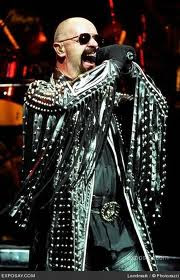 "Everybody in this country has the right to say what they think and feel and what best represents them. The people at Chick-fil-A have the absolute right to say and do what they want. It doesn’t matter that all of these people disagree with their opinion. The question was how would the people that agree with what that man said do to support the company and how would the ones against his anti-gay remarks protest. What you’re seeing here are the elements of the American Constitution in all of their glory. It’s a wonderful thing to see happening and talk about and the fact that everyone is discussing the gay rights issue is great. I don’t think that man thought too much about the business consequences of what he said, but I think he was standing for what he believes in. I don’t agree with him at all, but God bless the man. It’s as simple as that." - Openly gay heavy metal star Rob Halford, speaking to Ultimate Classic Rock. (Tipped by JMG reader Greg)


Reposted from Joe
Posted by oreydc at 10:51 PM No comments: Links to this post

On next Monday's episode of House Hunters International, HGTV's flagship series will feature a gay couple forced to leave the country due to DOMA. From the show's episode guide:

Ivan and Devin, built a life together in DC: they worked jobs they loved, shared their home with their beloved dog and exchanged wedding vows. But when Ivan's work visa expired, he had no other choice but to head back to his native Bogota, Colombia with his American husband, Devin, and their dog, Danger. Ivan's mother is delighted her son is back home and has extended her indefinite hospitality, but the couple agrees it's time to find their own digs. With few dog-friendly buildings, and an extensive wish-list, real estate agent, Sam Miller has his work cut out for him. But will he deliver the goods? Find out, when House Hunters International sets its sights on Bogota, Colombia.

The show was filmed prior to last week's announcement that Homeland Security will now deprioritize the deportations of LGBT partners.


Reposted from Joe
Posted by oreydc at 10:36 PM No comments: Links to this post

Via JMG: Bryan Fischer: Christians Should Kidnap The Children Of Gay And Lesbian Parents

For years here on JMG we've been following the case of Lisa Miller, the "ex-gay" woman who kidnapped her daughter to Central America after losing several court cases that awarded custody to her former partner. The preacher accused of facilitating that crime is about to go on trial, prompting American Family Association radio host Bryan Fischer to issue calls for an anti-gay "Underground Railroad" to help shield the kidnappers of the children of gay parents.

As you may recall, that "Underground Railroad" already exists in the form of the virulently anti-gay Liberty Counsel, as the kidnapped child was found living in the Nicaraguan home of the father of a Liberty Counsel employee. Over at Dead Jerry Falwell's Liberty University, students were taught that it's sometimes best to obey "God's laws" rather than "man's laws" and that "righteous kidnapping" in cases such as Lisa Miller's were justified. Those classes were taught by Liberty Counsel president Mat Staver and Lina Lindevaldsen, both of whom represented Miller in her failed custody attempts. The students were then tested on whether they'd break the law for God.

That semester’s midterm exam, obtained by Religion Dispatches, included a question based on Miller’s case asking students to describe what advice they would give her “as a friend who is a Christian lawyer.” After laying out a slanted history of the protracted legal battle, the exam asked, “Lisa needs your counsel on how to think through her legal situation and how to respond as a Christian to this difficult problem. Relying only on what we have learned thus far in class, how would you counsel Lisa?”

Students who wrote that Miller should comply with court orders received bad grades while those who wrote she should engage in civil disobedience received an A, the three students said. “People were appalled,” said one of the students, adding, “especially as lawyers-to-be, who are trained and licensed to practice the law—to disobey that law, that seemed completely counterintuitive to all of us.” Still, some knew what they needed to “regurgitate,” in order to get a good grade. “It was obvious by the substance of the class during the semester the answer that they wanted,” said one of the students. “The majority of people that I am acquainted with who did get As wrote that because it was expected of them.”

As word broke late last year that the federal government was about to find Lisa Miller, Fischer and other anti-gay sites declared that the FBI had been infiltrated by the "gaystapo."

Lisa and Isabella are not free. The FBI is after them. At any time, they may be captured. At any time, Isabella may be kidnapped by the FBI and her mother arrested. America is resurrecting Sodom with a vengeance, supported by the formidable power of the State. While Christian social services in the US are losing their traditional right to help children because they refuse state orders to adopt children to homosexual couples.

Fischer's tweets from yesterday (at the top of this post) have generated widespread condemnation, which is an everyday occurrence when he bloviates on any topic. But this time even some anti-gay and Christian sites are backing away from him, resulting in today's flurry of "clarifications." 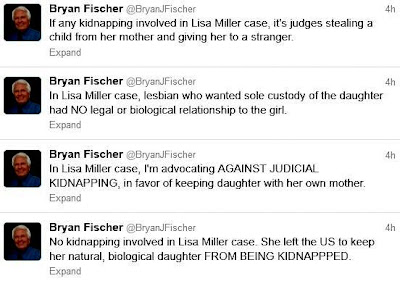 I recommend reading last week's exhaustive New York Times cover story on the kidnapping. We can only hope that after the preacher's trial will come multiple conspiracy counts for Mat Staver and his Liberty Counsel accomplices.


Reposted from Joe
Posted by oreydc at 10:14 PM No comments: Links to this post 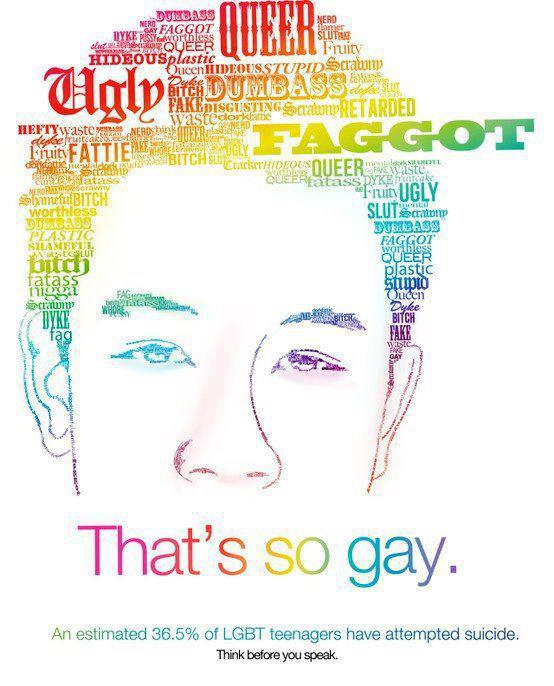 Posted by oreydc at 12:19 PM No comments: Links to this post

Posted by oreydc at 11:11 AM No comments: Links to this post

Welcoming Everything that Arises

- Sandra Weinberg, "Eating and the Wheel of Life"
Read the entire article in the Tricycle Wisdom Collection through August 10th, 2012
For full access at any time, become a Tricycle Community Supporting or Sustaining Member

Posted by oreydc at 9:12 AM No comments: Links to this post