I've already posted ample evidence as to why the Family Research Council was officially designated a hate group - it's not their policy positions per se, it's their strategy of willfully and systematically lying in order to defame, and discriminate against, an entire class of American citizens -...

Via So You Think I'm a Lefty Liberal Looney? Thanks 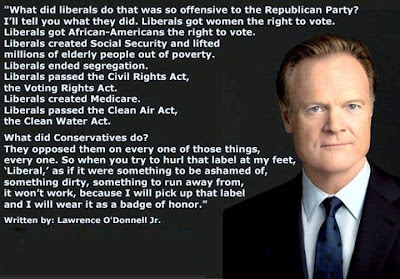 Posted by oreydc at 6:12 PM No comments:

Private Life, has begun shooting. The story is a little bit Brokeback Mountain, a little bit Boys Don't Cry. It's a short film, a fictionalized re-telling of an actual hate crime the writer/director read about nearly a decade ago that really terrified him. A gay couple, backpacking through the Appalachians, was shot at eight times sniper style while making love in a secluded mountain meadow. Check out his website, tell all your friends and SHARE it will all your Facebook friends. >>View Website

The film was written and directed by Greg Williamson, a grad student at the cinema school at the University of Southern California in Los Angeles.

In addition to the gay-interest theme, there is also a huge outdoors theme. Two-thirds of the story takes place out in the mountains on a backpacking trip. They have been scouting outdoor locations for months! [He’s really enjoyed being able to go on so many hikes to scout the locations.]

The film tells the story of a gay couple, struggling in their relationship, who end up forging a deeper connection while on a backpacking trip out in the great outdoors. Private Life is a story about a broken sort of person, who is scared and trying to hide from the world and how he ultimately learns that only by opening up and making himself vulnerable can he can truly begin to heal.

Greg added, “Even after coming out I spent a lot of time judging others—too gay, too effeminate, too shallow, too political or just too into escaping their troubles with drugs and alcohol and drama. Being gay is a large and complicated conversation and my place within it has never been much more than tenuous. It wasn’t until I started figuring out what this story means to me that I felt like I had anything to contribute to the conversation. To really open myself up to another person makes me feel vulnerable to them shutting me down, walking away and not returning it. It makes me feel that what I’m sharing might be judged as offensive or immoral or wrong or selfish and met with hostility, anger, rage or violence. It makes me feel vulnerable to feelings of embarrassment and humiliation and that’s really scary to me. Fear of vulnerability I think is a universal part of the human experience—a necessary instinct for survival. But there’s so much more to life than just surviving it. Making this film is a way to confront my own fears about what it means to me to come out and be vulnerable.” We will try to put together a screening in Boston once it’s complete.
Posted by oreydc at 4:15 PM No comments: 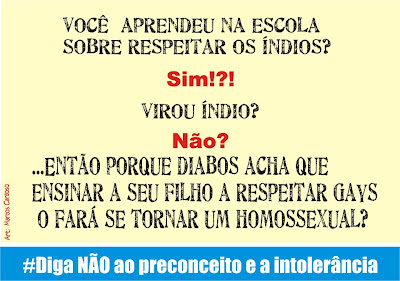 Did you learn anything about  indians in School?

Did it turn you into and indian?

...ok, so why then are these bastards thinking that teaching about homosexuality to your child with repect to gays will turn them into a homosexual?

# Just say no to prejudice and intolerance

Posted by oreydc at 3:27 PM No comments:

Yesterday’s attack on the Family Research Council and the shooting of a security guard there was a tragedy. The Southern Poverty Law Center (SPLC) deplores all violence, and our thoughts are with the wounded victim, Leo Johnson, his family and others who lived through the attack.

For more than 40 years, the SPLC has battled against political extremism and political violence. We have argued consistently that violence is no answer to problems in a democratic society, and we have strongly criticized all those who endorse such violence, whether on the political left or the political right.

But this afternoon, FRC President Tony Perkins attacked the SPLC, saying it had encouraged and enabled the attack by labeling the FRC a “hate group.” The attacker, Floyd Corkins, “was given a license to shoot an unarmed man by organizations like the Southern Poverty Law Center,” Perkins said. “I believe the Southern Poverty Law Center should be held accountable for their reckless use of terminology.”

Perkins’ accusation is outrageous. The SPLC has listed the FRC as a hate group since 2010 because it has knowingly spread false and denigrating propaganda about LGBT people — not, as some claim, because it opposes same-sex marriage. The FRC and its allies on the religious right are saying, in effect, that offering legitimate and fact-based criticism in a democratic society is tantamount to suggesting that the objects of criticism should be the targets of criminal violence.

As the SPLC made clear at the time and in hundreds of subsequent statements and press interviews, we criticize the FRC for claiming, in Perkins’ words, that pedophilia is “a homosexual problem” — an utter falsehood, as every relevant scientific authority has stated. An FRC official has said he wanted to “export homosexuals from the United States.” The same official advocated the criminalizing of homosexuality.

Perkins and his allies, seeing an opportunity to score points, are using the attack on their offices to pose a false equivalency between the SPLC’s criticisms of the FRC and the FRC’s criticisms of LGBT people. The FRC routinely pushes out demonizing claims that gay people are child molesters and worse — claims that are provably false. It should stop the demonization and affirm the dignity of all people.


Reposted from Joe
Posted by oreydc at 11:17 AM No comments:

Failing to mention that he himself founded a white supremacist group, former Youth For Western Civilization president Kevin DeAnna has authored a World Net Daily article in support of the Family Research Council.

In a press conference in front of the council’s Washington headquarters, Perkins thanked political opponents who expressed their condolences after the attack by a man who had been volunteering at an LGBT center. But the FRC chief challenged them “to go a step further.” He also asked organizations that condemned the violence to “call for an end to the reckless rhetoric that I believe” led to the shooting. Perkins identified the Southern Poverty Law Center as responsible for the atmosphere, stating that it gave suspected gunman Floyd Lee Corkins “a license to shoot.” When challenged by reporters, Perkins expanded on his remarks and claimed that the SPLC’s designation of the Family Research Council as a “certified hate group … marginalizes individuals and organizations letting people feel free to go and do bodily harm to innocent people who are simply working and representing folks from all across this country.”

Last year a representative for Youth For Western Civilization joined a march of German nationalists and neo-Nazis.

Also represented was a small but growing nonprofit U.S. organization called Youth for Western Civilization. The group, which bills itself as "America's right-wing youth movement," bannered a photo of the Cologne rally on its website this week, accompanying an account that declared that "we will not falter nor fail in our attempt for the defense of the Western homeland." Youth for Western Civilization, which has chapters at only about 10 U.S. campuses, is just one of hundreds of conservative student organizations around the nation, far smaller than better-known college-based groups like Young Americans for Freedom and College Republicans. But its influence is bigger than its size, drawing the attention of large numbers of admirers — and critics — since it began organizing three years ago. Thanks to its discipline in advocating a small number of simply stated positions and a new-media-savvy communications strategy, YWC may be radically refreshing the template for political organizing in American higher education.

The Family Research Council and neo-Nazis are birds of a feather as Tony Perkins has twice spoken before a Louisiana white supremacy group that lists an end to "race mixing" among its "statement of principles." 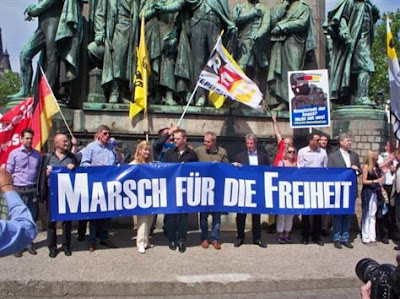 
Reposted from Joe
Posted by oreydc at 11:14 AM No comments:

- Jill Satterfield, "Meditation in Motion"
Read the entire article in the Tricycle Wisdom Collection through August 19th, 2012
For full access at any time, become a Tricycle Community Supporting or Sustaining Member

Options
Posted by oreydc at 10:57 AM No comments: