The Indigo Girls Speak Out for LGBT Immigrant Families


Posted by oreydc at 8:42 PM No comments: Links to this post

Reason 12 Why I left Christianity...


God's Gentle People are working to make it legal again to discriminate against LGBT people in Omaha, which only narrowly approved its workplace protection ordinance in March of this year.


Some churches involved in the effort put the call to sign the petition more directly than others; approaches range from reminders to sign petitions after Sunday services to one pastor's 39-minute sermon urging congregants to demonstrate their faith by signing their names. But the step into city politics reflects a similar perspective from some churches: that the ordinance limits their right to express their Christian views. “I think from time to time the people of God are called to resist their government at key crossroads, and I'm convinced that we stand at one of those crossroads right now in our city,” the Rev. Mark Ashton, lead pastor of Christ Community Church, said in a sermon last Sunday. “Every signature makes a difference in the future of our city,” he said later. “I'd encourage every registered voter who lives within the City of Omaha and follows Jesus to sign your name.”

Leading the repeal charge is the Nebraska Heritage Coalition, which has this message on their website:


Homosexual activity (not temptation or preference) is explicitly prohibited as sin in multiple passages in the Old and New Testament. We do not have the right to change God's moral law to fit our sexual preferences. We believe that when we admit our sin, the Lord is faithful to forgive. Whether it is gossip, greed, violence, hatred, homosexual activity or heterosexual adultery, every last one of us is guilty. Fortunately, our welcome before God is not based on our 'religion resume,’ or our ability to live up to a moral code. It is based on what Jesus did on the cross to pay for our wrongdoing. He forgives us and begins to change us from the inside out to become more like him. This is the Good News for men and women, young and old, rich and poor, clergy and laity, gay people and straight people alike. Therefore, everyone is welcome to attend our churches. Together, we can discover God’s forgiveness and the strength to live a life in obedience to his moral law.

There are 242 churches listed as backers of the repeal. (Tipped by JMG reader Sam)

"As an Obama supporter, I remain committed, if deeply demoralized. The reason for that new ambivalence is not that the reasons for re-electing him have changed - we desperately need to raise revenues to tackle the debt, we cannot launch a new Judeo-Christian war against Islam in the Middle East without igniting an even more ferocious global religious conflict; it's just wrong to cut off healthcare access for tens of millions, while ending homecare for countless seniors, while not even making a dent in the actual budget - because of give-aways to the extremely rich. And the way the Obama campaign had made those arguments clearly and consistently and built a brilliant campaign all the way to the first debate was quite something to behold.

"To be given a gift like the Romney 47 percent video is a rare event in national politics. To get it in the fall of an election should have made an Obama victory all but assured. But Obama threw it all back in his supporters' faces, reacting to their enthusiasm and record donations with a performance so execrable, so lazy, so feckless, and so vain it was almost a dare not to vote for him. What he has to do now is so nail these next two debates, so obliterate Romney in both, that he can claw his way back to victory. But if he manages just evenly-matched debates, let alone another Romney win, he's a goner." - Andrew Sullivan.


Reposted from Joe
Posted by oreydc at 6:26 PM No comments: Links to this post 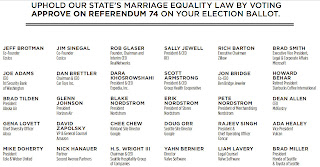 Embiggen the images to see all the high-rollers or go here for a PDF of the full ad.


Reposted from Joe
Posted by oreydc at 6:24 PM No comments: Links to this post