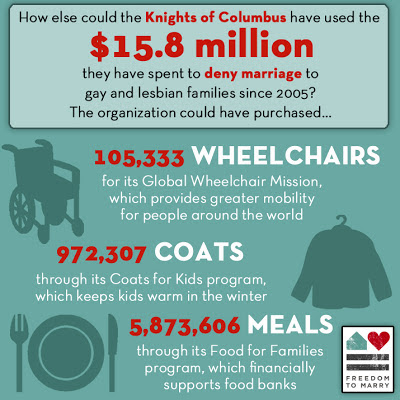 Posted by oreydc at 10:26 PM No comments: Links to this post

Via REPORT: The Catholic Church Is 2012's Top Funder Of Anti-Gay Campaigns 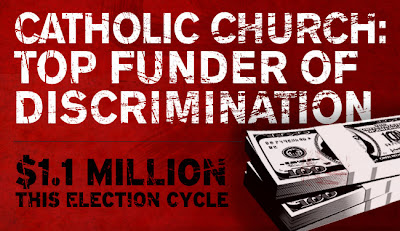 From a report issued today by the Human Rights Campaign:


Taking up where the Mormons left off in 2008, the Catholic Church – and its affiliate, the Knights of Columbus – have made considerable investments in the marriage fights in Minnesota, Maryland, Washington State and Maine this election cycle – spending at least $1.1 million to date. In addition, a close ally of the Church and past co-conspirator, the National Organization for Marriage, has spent nearly $1.4 million this cycle. Marriage equality opponents across the four states have, to date, raised roughly $4.1 million. The Catholic Church’s contributions make up 27 percent of that total figure. When you add in the contributions of Church ally NOM, the reality of the coordinated effort becomes clear: the Catholic Church, the Knights of Columbus, and NOM are responsible for funding nearly 60 percent of all anti-equality efforts in Minnesota, Maryland, Washington State and Maine.

The Catholic LGBT coalition Equally Blessed today also issued a report on the Knights of Columbus and the Catholic Church.


According to the report, which is based primarily on the Knights’ filings with the Internal Revenue Service, the organization donated $6.25 million to anti-marriage equality efforts between 2005-2012, with most of the money directed toward ballot measures aimed at banning marriage equality in 12 states. The sum includes:

- $1.9 million in donations to the National Organization for Marriage (NOM), $1.4 million of which was devoted to a successful and highly controversial campaign to overturn marriage equality legislation in Maine.
- A $1.1 million dollar donation to ProjectMarriage.com which supported the passage of Proposition 8, the constitutional amendment that banned marriage equality in California.
- More than $630,000 in donations to groups working against marriage equality through ballot initiatives that will be voted on next month in Maryland, Minnesota and Washington.

According to NOM’s internal memos, unsealed during legal proceedings in Maine, the organization adopted a strategy of turning the Black and Hispanic communities against gay, lesbian, bisexual and transgender people during the campaign to overturn marriage equality legislation in that state. The same memos advocated finding children who had been raised by same-sex couples and persuading them to speak out against their parents.


Reposted from Joe
Posted by oreydc at 10:25 PM No comments: Links to this post