to take them down. When your
mind is bright, you’ll be able to
see your defilements clearly, too,
and clean them away.

Via JMG: Uganda May Vote On Anti-Gay Bill Today


Earlier this month we learned that Uganda's infamous "Kill The Gays" bill was being pushed to a vote as a "Christmas gift to Christians."  Alerts went out yesterday that the bill may be voted upon as soon as today.  This morning the BBC reported a claim the the death penalty has been been dropped from the legislation.

A committee of Ugandan MPs has endorsed the proposed Anti-Homosexuality Bill but dropped the death penalty provision, an MP has told the BBC. MP Medard Segona said "substantial amendments" had been made to the bill but said he was not allowed to reveal further details. Speaker of parliament Rebecca Kadaga recently said the bill would be passed as a "Christmas gift" to its advocates. Homosexual acts are illegal in Uganda - this bill increases the penalties.
Foreign donors have threatened to cut aid if gay rights are not respected. The bill, tabled by MP David Bahati, proposes longer jail terms for homosexual acts, including a life sentence in certain circumstances. In its original form, those convicted of "aggravated homosexuality" - defined as when one of the participants is a minor, HIV-positive, disabled or a "serial offender" - faced the death penalty. Such offences would now be punished with life imprisonment, it is understood.
The original bill also prohibited the "promotion" of gay rights and called for the punishment of anyone who "funds or sponsors homosexuality" or "abets homosexuality". Mr Bahati has previously said that the death penalty provision would be dropped but this has not been confirmed until now. Mr Segona, who is on the Legal and Parliamentary committee of Uganda's parliament, told the BBC: "I can confirm it has been dropped."

Box Turtle Bulletin blogger Jim Burroway is suspicious of these claims because Ugandan legislators have lied about that in the past.

WBS Television in Uganda late yesterday posted another report on YouTube featuring statements by members of the Legal and Parliamentary Affairs Committee, which is charged with marking up the Anti-Homosexuality Bill with recommended changes. There are a few troubling aspects to the report. First, the reporter claims that the death penalty has been removed for “homosexuality acts with minors,” which sounds very suspiciously like several other previous reports, later proven to be false, that the death penalty had been removed. The last time we heard that line, we would quickly learn that the Legal and Parliamentary Affairs committee, in fact, had not removed the death penalty from the bill, but instead had simply obfuscated the death penalty’s presence in the bill. A complete explanation can be found here.

All Out's petition campaign against the bill has over 160,000 signatures already.  Add your name. 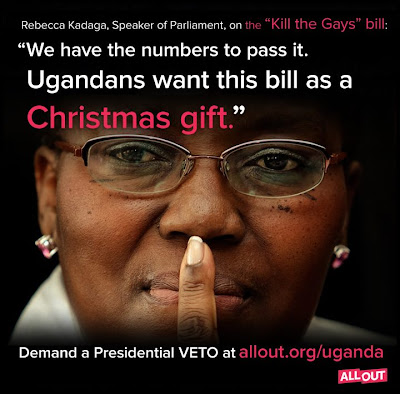 
Reposted from Joe
Posted by oreydc at 1:42 PM No comments:

Chelsea Clinton recorded a spot in support of Washington state's Referendum 74 but NBC News prevented its airing because she works for them as a journalist. Chris Geidner reports at Buzzfeed:


Clinton, a vocal proponent of marriage equality, cut the video for a group supporting the Washington state measure, as well as a second video for another group. But NBC, for which Clinton works as a "special correspondent" since last November, "scuttled" the campaign, sources familiar with the ads said.  In the weeks before the November elections — where voters in Maine, Maryland, Minnesota and Washington voted on measures relating to same-sex couples’ marriage rights — such prominent support would have been heavily sought. Clinton had supported efforts toward the legislative passage of marriage equality in New York, going so far as to attend and participate in a phone-banking effort in Manhattan before the legislature approved the bill in June 2011.


Reposted from Joe
Posted by oreydc at 1:35 PM No comments: 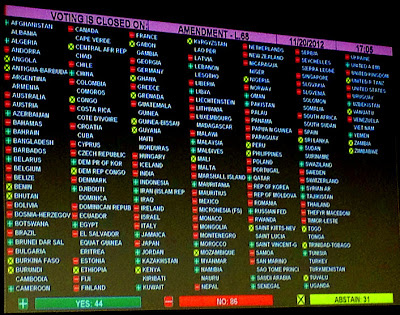 Yesterday the United Nations approved a resolution that condemns the killing of LGBT persons either by governments or via "extrajudicial" means such as hate crimes. Via press release from the International Gay & Lesbian Human Rights Commission:


An international coalition of organizations dedicated to human rights celebrated yesterday’s historic vote in the Third Committee of the United Nations General Assembly (UNGA) to pass resolution condemning extrajudicial, summary or arbitrary executions. The vote reversed the events of 2010 when the same body voted to strip the resolution of reference to "sexual orientation." The UNGA also expanded upon its commitment to the universality of human rights by including "gender identity" for the first time in the resolution’s history. The resolution, which is introduced biennially in the Third Committee, urges States to protect the right to life of all people, including by calling upon States to investigate killings based on discriminatory grounds. It was introduced by the Government of Sweden and co-sponsored by 34 states from around the world.

IGLHRC notes that the United Arab Emirates attempted to strip "sexual orientation" from the resolution on behalf of the Organization of Islamic Cooperation, just as they did two years ago. (See the photo above for the vote tally on that amendment.) They add: "Another failed effort, led by the Holy See, would have stripped all specific references to groups at high risk for execution; however it was never formally introduced."

The governments of the United States, Brazil, and many others spoke in favor of the resolution. IGLHRC reports that Egypt "spoke frequently" in opposition. Japan broke its long silence on the issue with this declaration: "We cannot tolerate any killings of persons because of their sexual orientation or gender identity. Our delegation voted against the proposed amendment to this paragraph because we think it is meaningful to mention such killings from the perspective of protecting the rights of LGBT people."

Reposted from Joe
Posted by oreydc at 11:08 AM No comments:

- Stephanie Kaza, "Ego in the Shopping Cart"
Read the entire article in the Tricycle Wisdom Collection through November 25th, 2012
For full access at any time, become a Tricycle Community Supporting or Sustaining Member

Posted by oreydc at 7:44 AM No comments: