"Dear President Clinton,  What a year you’ve had, the kind that really burnishes a legend. At the Democratic National Convention, on the campaign trail, in speeches aplenty and during interviews galore, you spoke eloquently about what this country should value, and you spoke unequivocally about where it should head. Such a bounty of convictions, such a harvest of words, except for one that’s long overdue: Sorry.


"Where’s your apology for signing the Defense of Marriage Act? And why, amid all the battles you’ve joined, and with all the energy you’ve been able to muster, haven’t you made a more vigorous case for same-sex marriage, especially in light of your history on this issue? You fret about your legacy, as any president would. For turning a blind eye to the butchery in Rwanda, you struggled through a mea culpa of sorts, and after Barack Obama seemed to lavish higher praise on Ronald Reagan than on you, you seethed.
"Well, DOMA, which says that the federal government recognizes only marriages of a man and a woman, is one of the uglier blemishes on your record, an act of indisputable discrimination that codified unequal treatment of gay men and lesbians and, in doing so, validated the views of Americans who see us as lesser people. If our most committed, heartfelt relationships don’t measure up, then neither do we. If how we love is suspect, then so is who we are. No two ways to interpret that. No other conclusion to be drawn." - Frank Bruni, writing for the New York Times.
Read the full essay.

Posted by oreydc at 7:41 PM No comments: Links to this post

"X-Men and Lord of the Rings star Sir Ian McKellen has recorded a video for a New Zealand equal marriage campaign.

"...The New Zealand Marriage Amendment Bill, which would legalise equal marriage, passed its first reading on 22 August, with a majority of 80 votes to 40 in parliament in support of the change.

"In the video, Sir Ian said: 'New Zealand gave women the vote before every other country in the world, the rest of the world has looked towards New Zealand for social advance and here we are again- this time at the exciting prospect of two people of the same gender being able to get married and to join the rest of the population.

"'It will be a popular move, I know, and I’m glad your major political parties have embraced it, supported too by the younger generation who see things a lot more clearly than people of my age.

"'My support is with you and I hope that by the time I return to Middle-earth I might even be able to get married there.'..."


Posted by oreydc at 7:03 PM No comments: Links to this post

Via JMG: Matt Barber: People With AIDS Are Sinners Who Deserve Their Gruesome Deaths 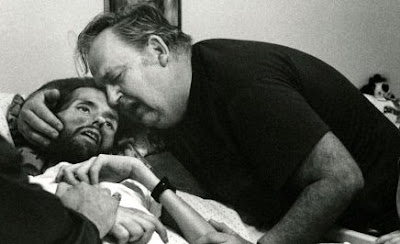 
Reposted from Joe
Posted by oreydc at 10:25 AM No comments: Links to this post

The Key to Happiness

- Dharmavidya David Brazier, "Let Grace In"
Read the entire article in the Wisdom Collection through December 3rd, 2012
For full access at any time, become a Tricycle Community Supporting or Sustaining Member

Posted by oreydc at 9:36 AM No comments: Links to this post