Via Path To Peace & Happiness / FB:

“May the blind see the forms, May the deaf hear sounds. May the naked find clothing, The hungry find food; May the thirsty find water And delicious drinks. May the poor find wealth, Those weak with sorrow find joy; May the forlorn find new hope, Constant happiness and prosperity. May the frightened cease to be afraid And those bound be freed; May the powerless find power, And may the people think of benefiting one another”

Posted by oreydc at 1:05 PM No comments: Links to this post

Via JMG: Gay Marriage Comes To The Caribbean

The tiny Caribbean island of Saba has legalized same-sex marriage.


Two men were recently married in Saba, marking the first ceremony of its kind in the region and setting off a frenzy of calls from gay couples in other Dutch Caribbean islands seeking to marry, said Julietta Woods with Saba’s Civil Registry office.”People keep calling me every second,” she said by telephone this week. As part of the Netherlands Kingdom, the islands of Saba, Bonaire and St. Eustatius have to recognize same-sex marriages. While Bonaire and St. Eustatius have balked at the idea of legalizing such unions, the idea has been embraced in Saba, long considered a gay-friendly destination. “We’ve seen it as a human rights issue,” said Saba council member Carl Buncamper, who is openly gay. “It is important to give the partners equal rights when it comes to inheritance and other benefits.”

The Netherlands became the first nation in the world to legalize same-sex marriage in 2001.


Reposted from Joe
Posted by oreydc at 12:34 PM No comments: Links to this post

Via JMG: Petition Of The Day 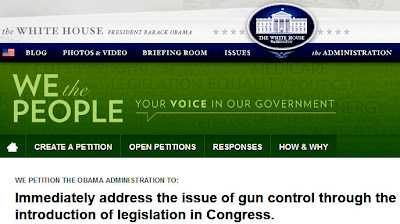 
The goal of this petition is to force the Obama Administration to produce legislation that limits access to guns. While a national dialogue is critical, laws are the only means in which we can reduce the number of people murdered in gun related deaths. Powerful lobbying groups allow the ownership of guns to reach beyond the Constitution's intended purpose of the right to bear arms. Therefore, Congress must act on what is stated law, and face the reality that access to firearms reaches beyond what the Second Amendment intends to achieve. The signatures on this petition represent a collective demand for a bipartisan discussion resulting in a set of laws that regulates how a citizen obtains a gun.


Reposted from Joe
Posted by oreydc at 12:29 PM No comments: Links to this post

- Chagdud Tulku Rinpoche, “Prayer”
Read the entire article in the Wisdom Collection through December 17th, 2012
For full access at any time, become a Tricycle Community Supporting or Sustaining Member

Posted by oreydc at 8:33 AM No comments: Links to this post

"If roads were collapsing all across the United States, killing dozens of drivers, we would surely see that as a moment to talk about what we could do to keep roads from collapsing. If terrorists were detonating bombs in port after port, you can be sure Congress would be working to upgrade the nation’s security measures. If a plague was ripping through communities, public-health officials would be working feverishly to contain it.

"Only with gun violence do we respond to repeated tragedies by saying that mourning is acceptable but discussing how to prevent more tragedies is not. But that’s unacceptable. As others have observed, talking about how to stop mass shootings in the aftermath of a string of mass shootings isn’t 'too soon.' It’s much too late." - Ezra Klein, writing for the Washington Post.
Labels: Connecticut, gun control, tragedy


Reposted from Joe
Posted by oreydc at 12:21 AM No comments: Links to this post