Posted by oreydc at 5:33 PM No comments: Links to this post

PFLAG founder Jeanne Manford, who died last month at the age of 92, will be posthumously honored with the Presidential Citizens Medal, the second-highest honor the government gives a civilian. Twelve others will receive the medal at an upcoming White House ceremony. Paul Schindler reports at Gay City News:

When Manford died last month at the age of 92, Jody Huckaby, PFLAG’s national executive director, said, “Jeanne Manford proved the power of a single person to transform the world. She paved the way for us to speak out for what is right, uniting the unique parent, family, and ally voice with the voice of LGBT people everywhere.” President Barack Obama will honor the Medal winners at a White House ceremony on February 15. The recipients were announced on February 8. Manford is only the second Citizens Medal recipient honored for her work on LGBT causes. A 2011 Medal went to Janice K. Langbehn, a lesbian who sued a Miami hospital after she and her three young children were denied the right to visit her partner of 18 years, Lisa Marie Pond, as she lay dying after suffering a brain aneurysm while on vacation there in 2007. Despite having been told that they were in “an anti-gay city and state” by a hospital official, Langbehn’s suit was dismissed.

“When Jeanne Manford publicly stood up for her gay son in 1972, she had no idea that her actions would spark a movement that would change the lives of so many individuals and families,” said PFLAG National Executive Director Jody M. Huckaby. “It started out as a simple act of love, but Jeanne’s legacy lives on, as straight allies continue to stand alongside their LGBT loved ones, united by their collective belief in a better—and more equal—tomorrow. Her voice has been joined by millions of others who have raised their voices and will continue to do so in support of acceptance, fairness, and equality.” “I was able to share the news of this honor with my mom before she left us and I only wish the President could have seen the amazing smile that spread across her face,” said Suzanne Manford Swan, daughter of the late Jeanne Manford. “My family is deeply touched by this honor and to represent the PFLAG family values of love and acceptance.”


Reposted from Joe
Posted by oreydc at 5:22 PM No comments: Links to this post

A Gay Dad's Invitation to a Supreme Court Justice: Come to Dinner With My Family

Some of us are afraid to exhale. Same-sex marriage is before the Supreme Court.

Just as the election had the "swing-state factor," these two cases have a swing vote: Justice Anthony Kennedy. Justice Kennedy was nominated to the Supreme Court by President Ronald Reagan but has been on the progressive side of two key LGBTQ cases, Romer v. Evans and Lawrence v. Texas. Now, with the question of same-sex marriage before the Supreme Court, Justice Kennedy, with the right decision, could eclipse the likes of Barbra Streisand, Madonna and Lady Gaga as the greatest gilded eagle for gay equality ever known.

Propaganda-like amicus briefs from the anti-gay community seem to be papering the walls of the Supreme Court on a daily basis. The Westboro Baptist Church, the Republicans of the House of Representatives, the Catholic bishops... they all have one. Progressive briefs are due in March.
I am just a gay dad. We gay dads tend not to file amicus briefs. However, we do jot notes, make lists and write letters. Sometimes we invite people to dinner. I think that will tell him more than all the anti-gay briefs put together.


Make the jump here to read the letter by Rob Watson

Posted by oreydc at 3:31 PM No comments: Links to this post

Posted by oreydc at 3:08 PM No comments: Links to this post

The Stream : Accepting LGBTs in Asia


Posted by oreydc at 8:52 AM No comments: Links to this post

Via JMG: These Nine People 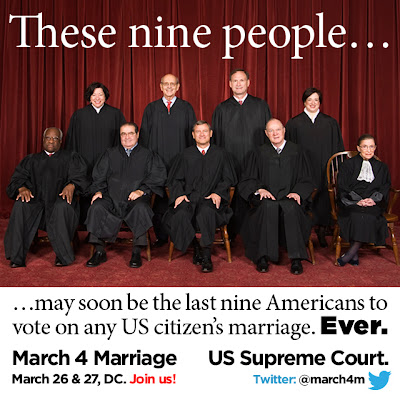 
Reposted from Joe
Posted by oreydc at 8:41 AM No comments: Links to this post

- Norman Fischer, "Revealing a World of Bliss"
Read the entire article in the Wisdom Collection through February 9th, 2013
For full access at any time, become a Tricycle Community Supporting or Sustaining Member

Posted by oreydc at 8:23 AM No comments: Links to this post