Posted by oreydc at 4:06 PM No comments: Links to this post

I, personally, am tired of folks hiding behind Christianity in this on-going marriage battle, and standing up for "Biblical Marriage." If these folks want a Biblical marriage, then let's make Biblical marriage the law of the land.....but....let's make sure we know what Biblical marriage IS.....For more than half my life, I've been a wedding coordinator, helping men and women plan the ceremonies that will bind them for life. One of the things that I ask my couples is, "What readings or scriptures do you want read in the service?"

Someone invariably mentions 1st Corinthians 13, the famous "Love Chapter." Love is patient, love is kind, love never insists on its own way and so forth. Wonderful advice for marriage, but Paul was not talking about marriage. He was addressing a church fight: the believers in Corinth had split into factions and were competing for prestige and influence. We see echoes of this conflict throughout the letter, but especially in chapters 12 and 14, which surround this passage.

Others want the passage from Ruth: "Where you go, I will go; where you lodge, I will lodge; your people shall be my people, and your God my God" Another moving passage, but it's certainly not about marriage. Ruth addresses this moving speech to her mother-in-law Naomi: from one woman to another. Isn't THAT interesting???

And then, the second creation story in Genesis comes up: (Yes, there are TWO creation stories): "Therefore a man leaves his father and his mother and clings to his wife, and they become one flesh" (Genesis 2:24). This passage is certainly appropriate to marriage, as it reflects the level of intimacy and commitment that distinguishes marriage from other relationships. Jesus quotes this passage, too, in Matthew and Mark, but he isn't exactly discussing marriage. Instead, Jesus' topic is divorce, and when ministers read these Gospel passages at weddings, as they often do, the message seems a little off. I'd rather not hear about divorce at a wedding.
One other passage frequently surfaces in weddings but rarely in mainline Protestant Churches. This passage has become part of the traditional wedding vows that most people today leave out. The part about wives should obey their husbands. Ephesians 5:22-33 commands wives to obey their husbands and husbands to love their wives. Conservative Christians may try to explain away the offense of this passage, but there's no escaping its ugly reality. Ephesians calls wives to submit to their husbands just as children must obey their parents and slaves must obey their masters.

The point is, Christian weddings rarely feature passages that directly relate to marriage. Only one passage, Genesis 2:24, seems especially relevant, while other passages require us to bend their content to our desire to hear a good word about marriage. Things are so bad that the worship books for many denominations turn to John 2:11, where Jesus turns water into wine at a wedding feast, to claim that Jesus blessed marriage.

Yes, he turned water into wine at that wedding. But we must remember the circumstances: His mother, Mary, went to Him for help because the hosts had run out of wine. He told her that "It is not my time." But in the way of all mothers, she continued asking, and like a good Son, he did something for His mother. Jesus' first miracle wasn't to bless a wedding, but done as a favor for his mother. People think that Jesus blessed marriage because he attended a wedding. That's the best we can do? No wonder it's common for couples to struggle over the choice of Scripture for their wedding ceremonies. The Bible just doesn't have much to say on the topic.

The only thing Jesus really DID say about marriage was, "What therefore God hath joined together, let not man put asunder." (Matthew 19:6) Divorce, was sin in Jesus' eyes. The only exception in which Jesus permits divorce is when adultery has already corrupted the marriage.

Moreover Jesus condemns all remarriage after divorce as adultery. Nor does He speak of remarriage as a one-time act of adultery, but of the ongoing relationship as adultery.

Let's not even go into some of the Bible's most interesting marriages. We won't talk about the fact that

Nor will we talk about some of the Bibles most chilling teachings regarding marriage, such as a man's obligation to keep a new wife who displeases him on the wedding night (Deuteronomy 22:13-21), his obligation to marry a woman he has raped (Deuteronomy 22:28-30) or the unquestioned right of heroes like Abraham to exploit their slaves sexually. I wonder: Have the "biblical family values advocates" actually read their Bibles?

In Biblical times, a wife was regarded as chattel, belonging to her husband; the descriptions in the Bible suggest that she would be expected to perform tasks such as spinning, sewing, weaving, manufacture of clothing, fetching of water, baking of bread, and animal husbandry. However, wives were usually looked after with care, and men with more than one wife were expected to ensure that they continued to give the first wife food, clothing, and marital rights.[Ex 21:10]
Since a wife was regarded as property, her husband was originally free to divorce her for any reason, at any time. A divorced couple were permitted to get back together, unless the wife had married someone else after her divorce.[Deut 24:2–4
Betrothal (erusin), which is merely a binding promise to get married, like engagement, is distinct from marriage itself (nissu'in), with the time between these events varying substantially. Since a wife was regarded as property in those days, the betrothal (erusin) was effected simply by purchasing her from her father (or guardian) and the girl’s consent is not explicitly required by any biblical law.

It's high time people came clean about how we use the Bible.
Posted by oreydc at 4:00 PM No comments: Links to this post

"The idea that there is something so wrong with same-sex households that it would be preferable for these children to go two or four or six years without permanent parents — an idea, again, that has little to no evidence behind it, and that is in fact contradicted by most of the evidence — bespeaks a homophobia so deep that it is hard for me to believe it could persist long among people who actually know any children in the foster system, and who actually know many gay couples. [snip] The answer to Kagan’s question is that gay marriage doesn’t harm traditional marriage. But the answer to Scalia’s retort is that he’s got it precisely wrong: Gay marriage is good for children in the foster system." - Ezra Klein, reacting to Justice Scalia's claim that there is "considerable disagreement" among sociologists regarding children adopted by gay parents. (Tipped by JMG reader Russell)


Reposted from Joe
Posted by oreydc at 3:53 PM No comments: Links to this post

Via JMG: Obama On SCOTUS: No Predictions 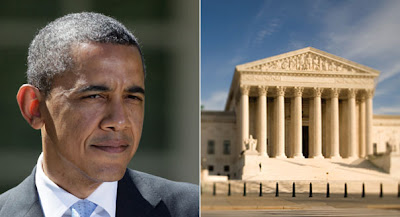 Yesterday President Obama spoke with the nation's two largest Spanish-language networks regarding this week's marriage cases before the Supreme Court.
Speaking to Univision:

“I never predict what the court will do. But I used to teach constitutional law, and there is certainly a strong basis for determining that in this age, given what we now know, given the changes that have been taking place in the states around the country, same-sex couples should be treated fairly and have the same rights benefits, be able to transfer property, all the rights and recognitions that heterosexual couples do.”

"I think it is time for the justices to examine this issue. I think not only is it right and fair but also consistent with our Constitution to recognize same-sex couples It doesn’t mean everybody has to agree from a religious standpoint about this issue. It does mean that it is very important for us to remember that we’re a nation where everybody is supposed to be equal before the law."


Reposted from Joe
Posted by oreydc at 3:45 PM No comments: Links to this post

"Witnessing a historic moment is such an odd and exhilarating thing. It is hard to register the full scope of it because you are chest deep in it.That is how I feel about the gay-marriage arguments made before the Supreme Court on Tuesday and Wednesday.However the court rules on California’s Proposition 8 and the federal government’s Defense of Marriage Act, there is no denying that something historic has just happened: an aggrieved group has taken a stand and given voice once again to the American — and indeed Democratic — ideals of justice and fairness and freedom." - Charles Blow, writing for the New York Times.


Reposted from Joe
Posted by oreydc at 3:42 PM No comments: Links to this post 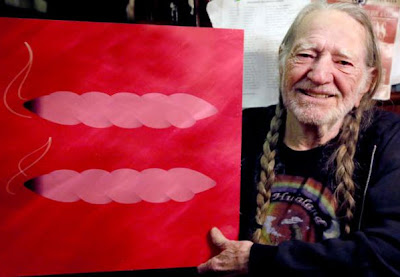 In an interview with Texas Monthly country music legend Willie Nelson displayed the above take on this week's marriage equality meme and restated his well-known support for LGBT rights.

TM: For better or worse, you've also grown into a reputation as something of an authority on marriage itself. WN: I've been there and back a few times. It's not perfect, so why should we expect it to be perfect for everybody? TM: But to be clear, you think everybody should be able to get married? WN: Absolutely. I never thought of marriage as something only for men and women. But I'd never marry a guy I didn't like. TM: A lot of people think this battle echoes the fight for civil rights in the sixties. WN: It does. It's about human rights. As humanity, we've come through so many problems from the beginning to here. I guess it finally had to come around to this. This is just another situation, another problem. We'll work it out and move on. TM: And what do you think they'll say when they look back on this? WN: We'll look back and say it was crazy that we ever even argued about this

Texas Monthly concludes the article by posting the above weed-equality avatar and inviting readers to use it themselves.
Labels: country music, pop music, straight allies, Willie Nelson


Reposted from Joe
Posted by oreydc at 3:40 PM No comments: Links to this post