Via JMG: Quote Of The Day - Rep. Earl Blumenauer

"Let's get real and stop the charade about what a 'social welfare' organization is. Last year, internal National Organization for Marriage (NOM) strategy documents were leaked, stating that the organization seeks 'to drive a wedge between gays and blacks' by promoting "African American spokespeople for marriage,' thus provoking same-sex marriage supporters into 'denouncing these spokesmen and women as bigots,' and "to interrupt the assimilation" of Latinos into 'dominant Anglo culture' by making the stance against same-sex marriage 'a key badge of Latino identity.'

"Does this sound like social welfare to you? Social welfare organizations should work in the public interest -- not to divide, exploit, and conquer. When I brought this up at the hearing today, Dr. Eastman, Chairman of the Board of NOM, angrily groused, 'To say that defending traditional marriage doesn't qualify for defense of the public good is beyond preposterous.'

"To Dr. Eastman, I say that it is the denial of my constituents, and all Americans, the right to marry the person they love is preposterous. To exploit racial and religious differences so you can fundraise for and enforce your specific worldview is preposterous. But your right to be preposterous should not extend to taking political positions under the guise of a social welfare organization, raising money and campaigning." - Rep. Earl Blumenauer (D-OR), writing for the Huffington Post.


Reposted from Joe
Posted by oreydc at 7:13 PM No comments: Links to this post


Reposted from Joe
Posted by oreydc at 7:03 PM No comments: Links to this post 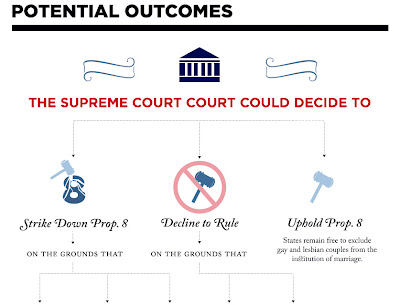 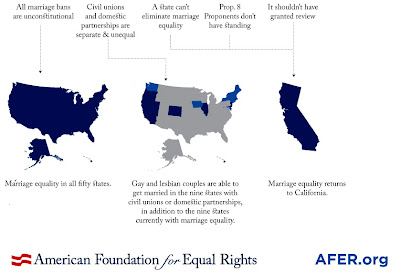 The Supreme Court is expected to issue its ruling this month. Rulings come on Mondays, so the next possible date is June 10th.


Reposted from Joe
Posted by oreydc at 6:54 PM No comments: Links to this post 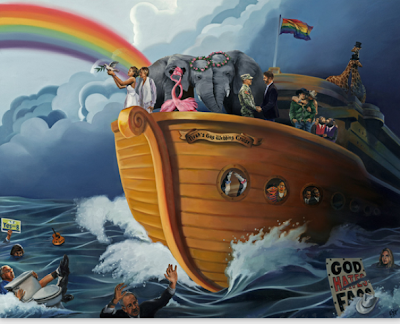 "Since those couples are inherently unable to accomplish the very thing that God intended for those who inhabited the ark – the procreation of the earth following His wrath for failing to follow His commandments." "Marriage is intrinsically the union of one man and one woman," Schubert said. "Government didn't create marriage, it merely recognizes what nature and nature's God created. Marriage was designed to bring men and women together because only those unions have the capacity to create new life.

"The rainbow is God's symbol, not an LGBT symbol. It's particularly bizarre to use Noah's Ark," he said, noting that same-sex couples are incapable of natural reproduction, which is why same-sex is not included in the definition of marriage, and isn't recognized as marriage in most states.

The artist and his partner will be among 25 couples that will take the C-Bus Of Love to Washington DC on June 21st for a marriage ceremony outside the Supreme Court. That angers Peter Sprigg, who claims that since prayers are forbidden on the steps of the Court because that would be considered a political protest, a same-sex wedding ceremony should also be banned. Sprigg: "They're definitely trying to influence public opinion, and I hope people see through it." 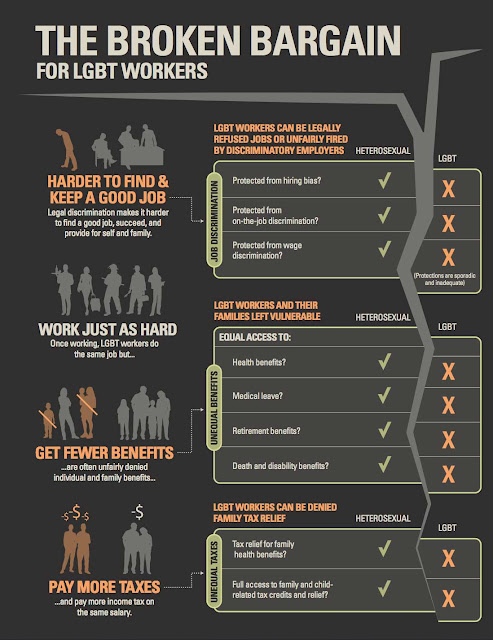 A new report from the Movement Advancement Project:

A landmark new report released today examines how lesbian, gay, bisexual and transgender (LGBT) workers might have the same job as a coworker, yet be legally fired, denied equal benefits and be required to pay thousands of dollars more in taxes simply because of their sexual orientation or gender identity. A Broken Bargain: Discrimination, Fewer Benefits and More Taxes for LGBT Workers illustrates how America’s basic bargain—that those who work hard can get ahead—is broken for LGBT workers. The report vividly shows how antiquated and discriminatory laws make it harder for LGBT workers to provide for themselves and their families, and offers detailed policy recommendations for addressing those inequities.


Reposted from Joe
Posted by oreydc at 6:46 PM No comments: Links to this post

Posted by oreydc at 11:06 AM No comments: Links to this post

- David Edwards, "Life Or Death"
Read the entire article in the Wisdom Collection through June 5, 2013
For full access at any time, become a Tricycle Community Supporting or Sustaining Member

Posted by oreydc at 7:31 AM No comments: Links to this post