Pope Francis said in a news conference Monday that gay people should not be marginalized, adding that he had no right to judge them if they have goodwill. While the remarks did not deviate from Catholic teaching on issues of sexual orientation, they represented a clear shift from the tone of Francis’ predecessors, observers say. The Washington Post (tiered subscription model)/On Faith (7/29), The New York Times (tiered subscription model) (7/29)
Posted by oreydc at 7:34 PM No comments: Links to this post

Via JMG: Pope: Who Am I To Judge Gay People? 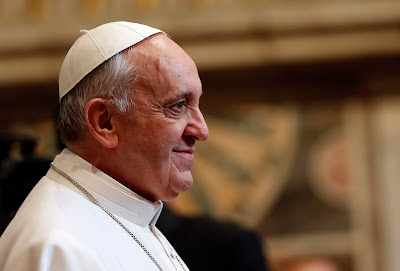 Pope Francis today refused to condemn gay people during a conversation with reporters on his return flight from Brazil.  Via NBC News:


Pope Francis said “who am I to judge?” gay people as he discussed one of the most divisive issues affecting the Catholic Church Monday. “I have yet to find anyone who has a business card that says he is gay,” the pontiff said at a press conference on his plane while returning from Brazil, where he talked about a number of subjects. “They say they exist. If someone is gay, who searches for the Lord and has goodwill, who am I to judge?” he added. The official position of the Catholic Church on the issue is that while homosexual desires or attractions are not in themselves sinful, the physical acts are.

And now we'll get several days of interpretations of what the Pope really meant.
UPDATE: Here the same item as reported by the BBC.


Pope Francis has said gay people should not be judged or marginalised. Speaking to reporters on a flight back from Brazil, he said: "If a person is gay and seeks God and has good will, who am I to judge him?" He also referred to the teachings of the Roman Catholic church, which say that while homosexual acts are sinful, homosexual orientation is not. The Pope's remarks are being seen as much more conciliatory than his predecessor's position on the issue.

UPDATE II: And here's the story from Associated Press, which provides some much needed context.


Pope Francis reached out to gays on Monday, saying he wouldn't judge priests for their sexual orientation in a remarkably open and wide-ranging news conference as he returned from his first foreign trip. "If someone is gay and he searches for the Lord and has good will, who am I to judge?" Francis asked. While stressing Catholic social teaching that calls for homosexuals to be treated with dignity and not marginalized, Francis said it was something else entirely to conspire to use private information for blackmail or to exert pressure. Francis was responding to reports that a trusted aide was involved in an alleged gay tryst a decade ago. He said he investigated the allegations according to canon law and found nothing to back them up. But he took journalists to task for reporting on the matter, saying the allegations concerned matters of sin, not crimes like sexually abusing children.

"So who on earth does the IOC, or Putin for that matter, think they're kidding with their 'assurances'? Can they really be so entirely naïve or so thoroughly cynical that they don't think non-Russian LGBT people or our allies care about what's been happening to our Russian counterparts in the wake of Putin's edicts so long as our own skins are safe? That we'll just happily ignore last week's news of skinheads luring gay teenagers with an online dating scam, then taping the sessions where they torture them so long as no one blocks our view of the figure skating events? That we can't recognize Third Reich-style politics or bureaucratic complacency? That, per the IOC, 'it remains to be seen whether and how' the recently-passed legislation 'will be implemented'? Gentlemen, guess again." - Nancy Goldstein, writing for the Guardian.


Reposted from Joe
Posted by oreydc at 6:25 PM No comments: Links to this post

Breaking News: Russian officials have officially announced that the law banning 'gay propaganda' will apply to all visitors - including those who will be attending and participating in the 2014 Olympic Games this February.
This means that any visitor who demonstrates gay pride or who is even assumed to be gay could be arrested by Russian authorities. We cannot let large companies like Coca-Cola support these discriminatory laws!
We need your help in spreading the word. Invite your friends to help us reach our goal of 10,000 signatures and we will deliver them to Coca-Cola's CEO Muhtar Kent!

Credit: Gay Star News
Want to get involved? See this petition on Causes
Posted by oreydc at 5:38 PM No comments: Links to this post

The USCIS has updated their FAQs page on same-sex marriage. Here are the first two questions:

Q1: I am a U.S. citizen or lawful permanent resident in a same-sex marriage to a foreign national. Can I now sponsor my spouse for a family-based immigrant visa? A1: Yes, you can file the petition. You may file a Form I-130 (and any applicable accompanying application). Your eligibility to petition for your spouse, and your spouse’s admissibility as an immigrant at the immigration visa application or adjustment of status stage, will be determined according to applicable immigration law and will not be automatically denied as a result of the same-sex nature of your marriage.

Q2. I am a U.S. citizen who is engaged to be married to a foreign national of the same sex.  Can I file a fiancé or fiancée petition for him or her?
A2. Yes.  You may file a Form I-129F.  As long as all other immigration requirements are met, a same-sex engagement may allow your fiancé to enter the United States for marriage.


Reposted from Joe
Posted by oreydc at 5:33 PM No comments: Links to this post

Marketing blog The Drum reports: "The Pembrokeshire Herald has apologised after someone tampered with an Enterprise Rent-A-Car ad to suggest that ‘cock sucking’ was an added bonus of the service. It is not."


Reposted from Joe
Posted by oreydc at 5:31 PM No comments: Links to this post

Gallup reports that if a national referendum on same-sex marriage were held in November, a slim majority of American would back it.

Across the nation's major demographic, political, and religious groups, support for the proposed law ranges from as high as 77% among self-described liberal Americans, and 76% among those with no religious affiliation, to as low as 23% among weekly churchgoers, and 30% among Republicans and conservatives. Other groups showing at least 60% support for legalizing same-sex marriage nationwide include Democrats, adults aged 18 to 34, those who rarely or never attend a church or other place of worship, moderates, Easterners, and Catholics. Others showing less than 50% support include Protestants, adults 55 and older, Southerners, and men.

Hit the link for a more detail breakdown of the demos.


Reposted from Joe
Posted by oreydc at 5:05 PM No comments: Links to this post