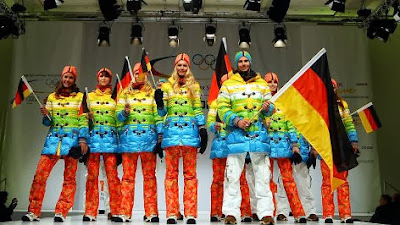 German athletes will wear the above rainbow-hued uniforms at the Sochi Olympics, but officials insist the design is not intended as a commentary on Russia's anti-gay laws. Der Spiegel reports:

The uniforms were created by German designer Willy Bogner, in cooperation with Adidas and the shoe company Sioux. Bogner claims they were an homage to the aesthetics of the 1972 Munich Summer Games and said he wanted to create a "celebratory design, inspired by the great atmosphere of the times." It conveniently comes in the wake of Munich's announcement that it will bid for the 2022 Winter Olympics, which, if it is successful, would make it the first city ever to have hosted both the winter and summer games.
But other commentators have seen a more explicitly political message in the uniforms. On Twitter, German users interpreted the uniforms "as a rainbow pattern" and as a "clear political statement." "Looks great, like a gay and lesbian pride parade," wrote one user. "Extremely hideous -- but a well-intentioned move supporting the rights of gays and lesbians," wrote another. The official description, which claims the outfits "were created using colors and materials specially tailored to the conditions in Sochi" seemed to, in ambiguous fashion, support that interpretation.

The German Olympic Sports Confederation insists that the design was finalized "before the Russian protests had even begun." (Tipped by JMG reader Elroy)


Reposted from Joe
Posted by oreydc at 4:06 PM No comments: Links to this post


Posted by oreydc at 3:40 PM No comments: Links to this post

Via the Advocate: Two Same-Sex Couples Married in Colombia

After a 2011 court ruling that ordered the Colombian Congress to create equal relationship recognition for same-sex couples, gay and lesbian Colombians are finally tying the knot.

On Monday, the nation's leading newspaper published a front-page article announcing the legal marriage of Elizabeth Castillo and Claudia Zea, who were also granted a marriage license by a different civil court judge Wednesday.

"I join you in a legitimate civil matrimony with all of the prerogatives and rights that civil law grants you and the same obligations imposed by civil law," said the judge before he pronounced the couple married, according to Blabbeando's translation of the Spanish-language article from El Espectador. The newspaper's headline read "Marriage Equality Is a Right" and featured a picture of the newlywed couple beaming.
Colombia has been on a long journey to embracing marriage equality, but last week's rulings seem to clear the way for same-sex couples throughout the nation to begin receiving marriage licenses.

In 2011, Colombia's Constitutional Court ruled that gay and lesbian couples could legally register their relationships beginninh June 20, 2013, if the nation's lawmakers failed to extend them the same benefits to them guaranteed to heterosexual married couples. When Congress failed to present any kind of marriage equality legislation, same-sex couples in Colombia began filing June 21 to register their relationships. But at that time, it was still unclear whether those relationships would be recognized as marriages or some other form of union.

Marriage equality advocates with the LGBT group Colombia Diversa reported that dozens of same-sex couples had attempted to register their relationships with local clerks since the June 20 deadline passed but were issued a document declaring their "solemn union," according to Blabbeando. Colombia Diversa argued that there is no legal structure to recognize a "solemn union" in Colombia's family code, and since Congress failed to meet the deadline set by the Constitutional Court, same-sex couples should automatically be allowed to marry, as it's the only way to guarantee them the same rights and privileges afforded to opposite-sex couples.

Blabbeando notes that the Colombian inspector general has been a vocal opponent of marriage equality, fighting the court ruling so vigorously that the Constitutional Court itself scolded his staff twice and told Inspector General Alejandro Ordoñez that his office had no legal right to interfere in these cases.

Colombia joins a handful of other Latin American nations that embrace marriage equality, including Argentina, Uruguay, and many regions in Brazil. Some states in Mexico, including the nation's capital, Mexico City, also perform same-sex marriages, and the nation's highest court ruled in 2010 that same-sex marriages performed in marriage equality jurisdictions must be recognized and honored throughout Mexico. Last year, the Mexican Supreme Court struck down a ban on same-sex marriage in the southern state of Oaxaca, effectively changing that state's civil code to say that marriage takes place "between two people" rather than "between a man and a woman."
Tags: Colombia
Posted by oreydc at 1:36 PM No comments: Links to this post

- Traleg Kyabgon Rinpoche, “Letting Go of Spiritual Experience”
Read the entire article in the Wisdom Collection through October 4, 2013
For full access at any time, become a Tricycle Community Supporting or Sustaining Member

Posted by oreydc at 7:44 AM No comments: Links to this post