Posted by oreydc at 10:41 PM No comments: Links to this post

From the Facebook page of the Harvey Milk Foundation:

Breaking! It is official! The USPS will confirm this week that my uncle, Harvey Milk will be commemorated on a 2014 US postage stamp. Another first! My deep gratitude to everyone that supported this effort! More details including the image to come via USPS soon! "Hope Will Never Be Silent" and will be on millions of letters soon!


Reposted from Joe
Posted by oreydc at 10:07 PM No comments: Links to this post


Posted by oreydc at 5:23 PM No comments: Links to this post

More Sarah goes to Church – her Baha’i on Life blog


"Sarah Goes To Church" is an engaging and insightful blog on her independent investigations into different religions. So she went along to find out about the Bahais of Webster Groves, Missouri along with her partner with the dazzling pink hair. Enjoy the read! http://sarahgoestochurch.blogspot.nl/2013/10/bahai-on-life.html And then you'll see that the bottleneck for her is that […]
Read more of this post

Posted by oreydc at 10:46 AM No comments: Links to this post

- Mark Unno, “The Buddha of Infinite Light and Life”
Read the entire article in the Wisdom Collection through October 11, 2013
For full access at any time, become a Tricycle Community Supporting or Sustaining Member

Posted by oreydc at 10:39 AM No comments: Links to this post

Via Sarah Goes To Church: AND THAT'S WHEN SARAH STEPPED OFF THE BAHA'I BOAT

Sidebar - I'm tired of talking about gay issues at church. My life is like a gay pride parade - it's constantly raining glitter and fabulous. Gay is all around me and it's wonderful. I wouldn't want it any other way. My life is amazing. It's just...I know people are still working through this whole "Is it okay to be gay?" thing and trying to figure out where God fits in with the issue. But I'm really losing my patience and I'm starting to get angry. GOD LOVES EVERYONE NOW SHUT THE FUCK UP!!!! Can we please talk about something other than gayness? Please? PLEASE!!??!!! Anything. Syria. Gun violence. The afterlife. Mysteries of the universe. Tacos. A.N.Y.T.H.I.N.G.

Gayness follows me. I cannot escape it. Long ago I accepted that I indeed have magical gay powers and everything I touch turns to gay. So, I should have known the Baha'i service would eventually start heading down a gay road...and it did.

Out of nowhere the conversation turned to David's son, who recently realized he was gay. David was very supportive of his gay son - standing up for his desire to wear skirts and make-up at school. David's son felt for some time that he was transgender - living life as a woman in a man's body - and started expressing himself as such. David beautifully described how God didn't see gender or biological sex. God only sees our soul and our souls are without gender or biological sex. It's not your human body that matters - it's your soul. Up until this point I appreciated everything David had to say about gender and homosexuality.

Then things got sticky...someone brought up the issue of having sex.

Baha'i's are to refrain from sexual activity until they enter into a religious marriage - and the only marriages recognized are marriages between...you guessed it...one man and one women. The Baha'i faith doesn't exactly condemn gay love. They are big believers in legal marriage equality and protecting gay rights.  And you can totally hold hands and talk and snuggle and share your deepest darkest secrets with your same-sex partner, but you can't have sex with him or her. EVER. Not even oral. Nope. Not okay. If you are gay and you follow the Baha'i faith you are expected to practice life long chastity.

AND THAT'S WHEN SARAH STEPPED OFF THE BAHA'I BOAT.


WHAT?!?!?!!!!! Does God hate gay people? Cause that seems like lifelong punishment for being gay...the way God made them to be. What kind of God does that? Here ya go, here are all these desires and feelings and instincts but DON'T YOU DARE DO ANYTHING WITH THEM OR I WON'T LIKE IT! Also, if God doesn't see the physical body and only cares about the soul then why does God care about gay sex or sex at all for that matter?

No really, why does God care if we have sex? WHY?  See, I don't think God cares. Not even a little bit. I think God could give two shits about where you poke your pickle or who's dusting your closet. I think sex is a good thing - not a curse, or a punishment or a test of will-power. It's a great stress reliever - like all natural Xanax. It's a sleep-aid. It helps you deal with body issues. It can give you energy. It makes you happy. Maybe God created us with these "feel good places" because God wants us to...I don't know...feel good?

There was a woman at the service, a gay woman, who talked about how hard it was to be chaste but  she knew this life was only but a blip and that her devotion would be rewarded in the next life.

This just does not make sense to me. AT ALL. This Earthly life is but a test for the next one? Baha'i's don't believe in a literal hell or heaven, but instead gauge heaven and hell by your closeness with God. So, apparently God is King Candy and having gay sex is like drawing that horrible gum drop guy when you are half way through with Candyland (the children's game) and are now even further away from a heavenly ice- cream palace finish. It helps me if you can explain things in preschool terms. Candyland exhausts me and I really think God can do better.

After the service the nice man sitting next to me talked about how having standards is so important. I questioned which standards you are supposed to follow because lately I've found everyone is claiming different standards as "God's". He was very understanding and explained that the great thing about Baha'u'llah is that he was truly a messenger of God and spoke the truth.

Uh huh. Right. Thanks. Gotta run. I need a drink - which you do not believe in. 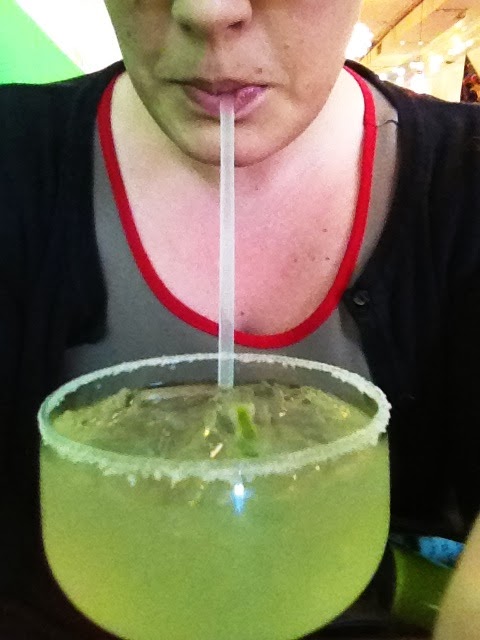 This sex loving booze drinking spiritual enthusiast left church and headed straight to Cherokee street for some authentic Mexican cuisine and a delicious homemade margarita. I said a quiet prayer for all the gay people around the world who have been led to believe they shouldn't live a happy and full and SEXUAL life because of their orientation. I wish you all many wonderful orgasms and lots and lots of post-coital snuggles.
I'm so glad I finally made it back to church.
Cheers!

Make the jump here to read the full article at Sarah Goes to Church
Posted by oreydc at 8:35 AM No comments: Links to this post