General Motors will now recognize same-sex marriages for the purposes of insurance and pension benefits.


“GM will recognize a legal marriage for U.S. employees no matter the state of residence,” the automaker said in a statement. “For example, if a GM employee residing in Michigan, where same-sex marriage is not recognized, got married in New York, GM would recognize that marriage.” GM also changed its policies to allow same-sex partners of GM employees to inherit their spouse’s pension when they die. “Because marriage is considered a ‘life event,’ U.S. hourly and salaried employees can add their spouse to their health care coverage at any time within one year from their date of marriage or during the next annual enrollment period with proof of a valid, legal marriage license,” GM said in a statement.

Let's see if this prompts a Dump General Motors boycott by NOM.


Reposted from Joe
Posted by oreydc at 6:49 PM No comments: Links to this post

Via JMG: Love for Everyone


Celebrating a year of big wins and marking the need to finish the job, Freedom to Marry today announced a new video billboard titled “Love for Everyone” featuring three diverse same-sex families and a message of love and commitment. The billboard will display in Times Square throughout the holiday season up until January 4, 2014. More than 1.5 million people pass through Times Square daily. “With the rapidly expanding importance of digital technology and new media, Freedom to Marry is using every opportunity to communicate our message of fairness for all committed couples and their families,” said Michael Crawford, Freedom to Marry’s digital director.

Reposted from Joe
Posted by oreydc at 5:23 PM No comments: Links to this post 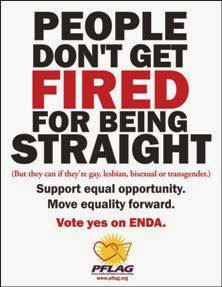 Posted by oreydc at 9:56 AM No comments: Links to this post

- Jack Kornfield, "The Question"
Read the entire article in the Wisdom Collection through November 9, 2013
For full access at any time, become a Tricycle Community Supporting or Sustaining Member

Posted by oreydc at 8:14 AM No comments: Links to this post

The bill only needed to pass by a simple majority after it earlier obtained the necessary votes to break a Republican filibuster.

All Democrats (and Independents) present voted for the bill, along with 10 Republicans: Kirk, McCain, Flake, Toomey, Portman, Hatch, Ayotte, Murkowski, Heller and Collins.

The legislation now moves over to the House, where Republican Speaker John Boehner has promised to kill it.

Boehner claimed the other day that ENDA is unnecessary, as it duplicated existing protections under the law.  That’s actually not true. First, here’s Boehner’s aide:


“We have always believed this is covered by existing law,” the aide said, adding that it is “not a new issue or a new position — it’s a longstanding position, and, frankly, not ‘news’ at all. This has been his position, on the record, for years, stated publicly many times.”

Another odd aspect of Boehner’s position: He claims that ENDA will lead to frivolous lawsuits and the loss of American jobs.  But if gay job protections are already part of the law, and this legislation is duplicative, then we’re already have those frivolous lawsuits and lost jobs.  So where are they?
As Democratic Senate Leader Harry Reid noted the other day, Boehner claims to be worried about frivolous lawsuits yet he spent $2 million of the taxpayers money on his own frivolous lawsuit against the Defense of Marriage Act, which was struck down (in part) by the Supreme Court earlier this year.

Because of Boehner’s opposition, the prospects for ENDA in the House aren’t terribly good. Which raises the question of how big a victory this really is.

I’m not a terribly big fan of passing legislation in one House that you know won’t pass in the other. It’s not always a good idea to make your team take hard votes when the vote won’t matter, because the legislation is going down. But in this case, things are more interesting as the “hard vote” has tended to be the vote against ENDA, not the vote for it.

As Senator Reid noted the other day, both GOP Senators Marco Rubio and Ted Cruz, likely presidential contenders in 2016, chickened out when it came to speaking against ENDA on the Senate floor.  Both men are known for being happy (and yappy) to go on the Senate floor and talk at length if it means a bit more media exposure.  Yet on ENDA, they were silent (though they ended up voting against it).  Arch-conservatives that they are, Rubio and Cruz fear that opposing gay rights might hurt their presidential aspirations, and Rubio is a religious right clone.  That’s quite a tacit admission.
For that reason, the ENDA vote was likely a good idea, even if there is little chance of it passing the Republican House.

Clearly ENDA, and gay civil rights issues more generally, are making the Republicans squirm.  What was once feared to be a third-rail for Democrats, has become a real third-rail for Republicans.  And who doesn’t get a chuckle out of that.

Make the jump here to read the full article
Posted by oreydc at 8:07 AM No comments: Links to this post