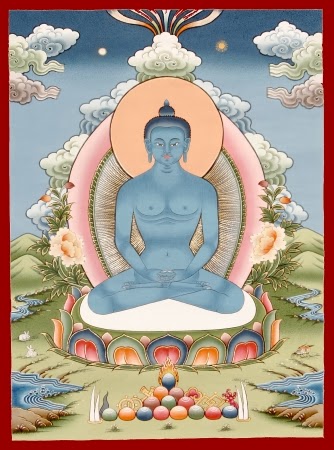 The Bodhisattva of Universal Worthy

The Importance of the Lotus Sutra

The Lotus Sutra is compossed of 28 chapters. There are two broad themes to the Lotus sutra, the first being found in the first fourteen chapters. The first fourteen chapters are meant to explain the reality of intrinsic commonalities that occur in human beings, while the remaining chapters describe the eternalness of the Buddha. (www.nshi.org/Buddisme/English%20Buddhisme/Lotus-And-Buddha.htm) The Lotus Sutra is the only sutra that promises the salvation of women, therefore it was a central part of the Japanese women's religion. According to other sutras, the only way for a woman to reach enlightenment would be for her to be reborn as a man, which is why this particular sutra was so important. Fugen was believed to be the protector of those who were devoted to the Lotus Sutra, so Fugen became an important figure to all women and their prayers (http://wsu.edu/~dee/ANCJAPAN/WOMEN.HTM). Like many other sutras, the Lotus Sutra can be recited and copied to pay alms by both men and women (http://news.fjnet.com/english/sutra/t20060617_29976.htm). Listen to the video below if you would like to hear the Lotus Sutra chanted.

Samantabhadra contributed to the Avatamsaka sutra, which recites the practices of Bodhisattvas and the merits of the Buddhist teaching.  In the sutra, the Bodhisattva Samatabhadra teaches a student how wisdom is only present as long as it benefits everyone.  In his teaching he recites ten great vows that he uses to guide himself to enlightenment.  The Ten Great Vows included:


The first eight vows guide one to enlightenment through oneself; while the last two vows are drawn out to help others reach enlightenment.  The first vow is to show respect to all buddhas for their wisdom and compassion.  The second refers to Samantabhadra’s belief that there are infinite number of Buddhas and how all should be praised for their virtues.  The third is to make offerings like food or flowers to the Buddhas.  However, Samatabhadra stated that the most valuable offering is to practice the teachings of the Buddha so everyone can benefit.  In the fourth vow, Samatabhadra identifies how everyone has sinned from thoughts, words, or actions throughout their past lives. So, it is best to repent these sins by commiting one's self to not make the same mistakes.  With the fifth vow, Samantabhadra proposed to benefit from others merits and share the Buddhist teachings.  The sixth is intended to ensure that the Buddhist teachings will continues to be passed on.  The seventh vow is for the Buddhas to remain in the world so they would be able to guide more individuals.  By always following the Buddha’s teaching in the eighth vow, people are able to attain enlightenment by taking the Buddha’s same path.  The ninth is meant for all living beings to be able to live in harmony.  Finally, the last vow is designed to save all living beings by gaining merits from following the first nine vows.

For his dedication to the Buddhist teachings and through his Ten Great Vows, Samantabhara also became known as the Bodhsattva of Extensive Conduct.  As well as, Samantabhadra’s vows have become a common practice in East Asian Buddhism and have been used regularly for morning rituals.  The Ten Great Vows have even become basic guidelines for bodhisattvas.

Thanks to Foundations of Buddhism of this Info
Posted by oreydc at 5:32 PM No comments:

The religion of the future will be a cosmic religion. It should transcend a personal god and avoid dogmas and theology. Covering both the natural and spiritual, it should be based on a religious sense arising from the experience of all things, natural and spiritual, as a meaningful unity. Buddhism answers this description. ~ Albert Einstein

How Coming Out Heals Your Life

- Ajahn Sumedho, “The Gift of Gratitude”
Read the entire article in the Wisdom Collection through January 20, 2014
For full access at any time, become a Tricycle Community Supporting or Sustaining Member