So here's a fascinating -- and by fascinating, I mean appalling -- case that the ACLU is filing on behalf of a local family, against a Louisiana school district and several officials/teachers. The family suffered a tremendous litany of unconstitutional behaviors directed against them, but they are perhaps best represented by the words of plaintiff Scott Lane, husband of plaintiff Sharon Lane, father of plaintiffs S.L and M.L, and stepfather of plaintiff C.C. He gives examples of some of the issues his Buddhist stepson encountered, and the disregard for constitutional separation of church and state is simply staggering:

On a science test, their teacher had included a fill-in-the-blank question: "ISN'T IT AMAZING WHAT THE _____ HAS MADE!!!!!!!!!!!!!!!!!!!!!!!!!!!!!!!!" When my stepson didn't know the answer ("Lord"), she belittled him in front of the entire class. When he wrote in "Lord Buddha" on another exam, she marked it wrong. As she was returning that exam to students, one student proclaimed aloud that "people are stupid if they think God is not real." In response, my stepson's teacher agreed, telling the class, "Yes! That is right! I had a student miss that on his test." The entire class broke out in laughter at my stepson.
The same teacher also told our children that the Bible is "100 percent true," that the Earth was created by God 6,000 years ago, and that evolution is "impossible" and a "stupid theory made up by stupid people who don't want to believe in God." She's also told the class that Buddhism is "stupid." (emphasis added)

While this particular teacher, Rita Roark, was especially problematic, Lane gives a number of other examples of the general atmosphere of the school, including that of defendant and school superintendent Sara Ebarb:


When we went to the school to meet with the principal, we saw a large picture of Jesus over the school's main doors, a Bible verse on the school's electronic marquee, and numerous religious posters and pictures on the walls. Religious images and messages are displayed throughout the school, in fact.
We learned from our children that official prayers, typically led by the principal or teachers, are routinely incorporated into class and school events like assemblies, and sporting events. The school even requires students to attend "See You at the Pole" each year, where they must take part in prayer and worship.
We discovered that school officials were distributing religious literature to students. For example, one of our other son's teachers passed out copies of a book from the "Truth For Youth" program, a revivalist ministry. The book included the entire New Testament of the Bible as well as cartoons that denounce evolution and trumpet the evils of birth control, premarital sex, rock music, alcohol, pornography, homosexuality, sorcery, and witchcraft. (emphasis added)

Supporting evidence is provided. But the embrace of religiosity and disregard for constitutional protections goes much higher than teachers and event coordinators. When the Lanes took their complaints to the school superintendent, she told them


that “[t]his is the Bible Belt” and that they would simply have to accept that teachers would proselytize students. She also asked whether C.C. had to be raised as a Buddhist and whether he could “change” his faith, and she suggested that C.C. transfer to another district school – more than 25 miles away where, in her words, “there are more Asians.” The day after meeting with the Lanes, the Superintendent sent a letter to Negreet Principal Gene Wright stating that she approved of Negreet’s official religious practices. Wright read the letter to the entire Negreet student body over the school’s public address system. (emphasis added)

The superintendent's complete lack of comprehension of religious freedom is made more clear in the complaint, which details how she told the Lanes


that “[t]eachers have religious freedom.” She further stated that “if they were in a different country,” Plaintiffs would see “that country’s religion everywhere,” and that, therefore, they “shouldn’t be offended” to “see God here.” Purporting to illustrate her point further, she noted that, because she did not find it offensive that “the lady who cuts [her] toenails has a statue of Buddha,” Plaintiffs should not be bothered by Roark’s in-class proselytization.

In her mind, "freedom" is not a freedom to hold a belief, but a freedom to force others to hold that belief. The illogicality of such a position is made apparent when one considers what happens when you have people who hold different beliefs exercising this "freedom". Furthermore, Erbarb's response to the family -- that C.C. should go elsewhere, because he was in the Bible belt -- illustrates that her view of religious freedom is entirely one sided. It is not freedom, and it extends only to Christians. It is worth noting that, while C.C. did transfer, he is still subject to much of the same religious harassment. Even if that were not the case, it should go without saying that no child, and no family, should have to go half an hour out of their way each morning simply to avoid being harassed and intimidated -- much less by authority figures -- for praying to Lord Buddha (or not praying at all) rather than Lord Jesus.
And while C.C.'s troubles are not over, neither are those of his siblings (one of whom is a Christian):


Plaintiffs S.L. and M.L. are minor children and brothers to C.C. They are both enrolled at Negreet High School, where they are subject to the customs, policies, and practices of Defendants Sabine Parish School Board, Superintendent Ebarb, and Principal Wright. Although M.L. attends church, he believes that faith is a personal matter. He believes that he should be able to decide, with the guidance of his parents and religious leaders, which beliefs he will follow and when, as well as how to express those beliefs, without pressure from his teachers and school officials. S.L. is a non-believer who does not subscribe to the religious beliefs promoted by schools officials.

It's simply mind boggling that adults would think that doing this to children was in any way appropriate, much less legal.

Posted by oreydc at 7:19 PM No comments:

- Jenny Offill, "Bit of Poetry that Stick Like Burrs"
Read the entire article in the Wisdom Collection through January 29, 2014
For full access at any time, become a Tricycle Community Supporting or Sustaining Member

“I look forward to the day when presiding over a historic wedding ceremony like this is just the norm. To me, it was special to all the couples we married today and I look forward to dashing off to go sign their marriage certificates. It’s awesome. I had to get sworn in as a commissioner for the state of California, so I’m not an ordained minister like I said, but I’m a commissioner. So you can call me to commish – Queen Commish!" - Queen Latifah, telling reporters had her authority to officiate expired at midnight last night. When asked if she would ever get married on national television, she returned to her stock position: "That would probably be something I would keep for me."


Reposted from Joe Jervis
Posted by oreydc at 7:14 AM No comments:

Via JMG: RUSSIA: Gay-Basher In Custody After Being Deported By Cuban Authorities 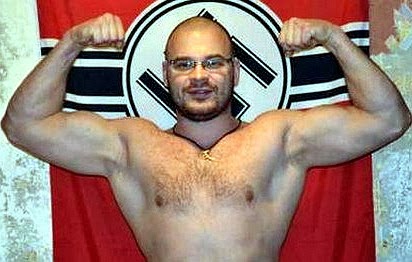 Infamous gay-basher Maxim Martsinkevich is today in the custody of Russian police after fleeing to Cuba, where local authorities promptly deported him on the basis of fugitive warrants filed with Interpol by Russia and Ukraine. Via LGBTQ Nation:


A spokesperson for the Russian Federal Security services told LGBTQ Nation that Maxim Sergeyevich Martsinkevich, also known by his street nickname “Tesak” (or, the “Cleaver”) arrived at the Russian capital’s Sheremetyevo Airport after a direct flight from Havana, and was immediately detained by Russian law enforcement. Martsinkevich had been formally charged and arrested in absentia on Dec. 13, 2013, by Moscow’s Kuntsevskiy court. He is being held on charges of committing a crime under Art. 282 of the Russian Criminal Code – incitement of hatred or enmity and human dignity with violence – in connection with videos that his anti-gay Russian group “Occupy Pedophilia” had posted online. Martsinkevich fled Russia in November to the Ukraine, where he allegedly attacked and physically abused a former contestant of the Ukrainian franchise of the British talent competition, “The X Factor.” Yuvlena Frolyak, a spokesperson for the Ministry of Internal Affairs of Ukraine in Sevastopol, told LGBTQ Nation that her office had also issued an arrest warrant based on the criminal complaint filed by the victim.

Martsinkevich reportedly faces only three to five years in prison.


Reposted from Joe Jervis
Posted by oreydc at 7:09 AM No comments:

From my friend Nikos: On The Shortness of Life: An Introduction to Seneca

Posted by oreydc at 7:03 AM No comments: