Via LGBTQ Nation: A gay dad’s open letter to the homophobic parents who threw away their gay son

Another young person has been thrown out of his home for coming out as gay.

I have written about this on a number of occasions covering such events in the United States, Nigeria and Uganda.

This time the event was recorded. Trying to imagine the evil some people can impart on their children is no longer necessary. Now we can hear them in their own self righteous voices

It started when the family called 20-year-old Daniel Pierce to an “intervention.” He left his phone recorder going during the confrontation and was later posted online as “How not to react when your child tells you he is gay.” It has now gone viral.

In the video, Daniel explains to what sounds like his mother, step-mother and father that he is gay. The choices this set of parents makes as a reaction are almost as bad as they possibly could be.

His mother makes a statement at the outset that becomes increasingly shocking as the video proceeds and the parenting adults collectively verbally attack and physically abuse the young man.

The mother’s statement is: “I have known since you were a young boy that you were gay.” If there was ever clear pointed evidence that Daniel was “born that way,” her comment would be it.

She knows who her child is, yet due to her own personal agenda she pretends he is making a choice and coldly rejects him as a result.

http://www.lgbtqnation.com/2014/08/a-gay-dads-open-letter-to-the-homophobic-parents-who-threw-their-gay-son-away/
Posted by oreydc at 9:35 PM No comments: Links to this post 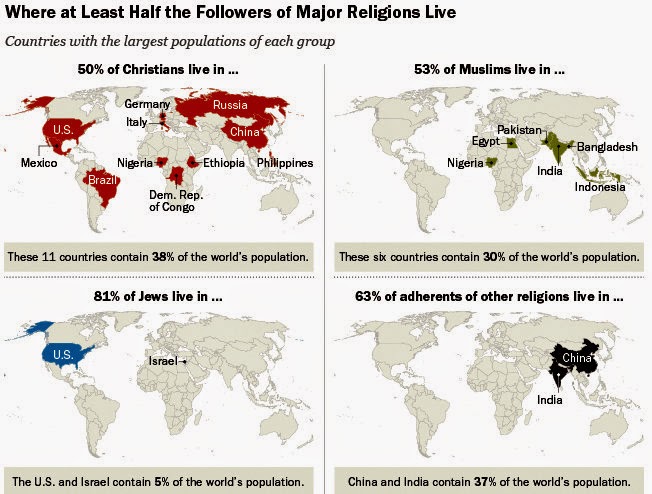 
Earlier this summer, on World Population Day, we explained that half of the world’s population lives in just six countries. In many cases, the world’s major religious groups are even more concentrated, with half or more of their followers living in one or a handful of countries. For several years, demographers at the Pew Research Center have been studying the demographic characteristics of eight groups: Buddhists, Christians, adherents of folk religions, Hindus, Jews, Muslims, the religiously unaffiliated and followers of other religions. While Christians and Muslims are more widely distributed around the world, the other groups have a majority of their populations in just one or two nations, according to 2010 estimates from our Global Religious Landscape report.

While there continues to be much attention paid to the growth of the religiously unaffiliated population in Europe and North America, more than half (62%) of the world’s 1.1 billion unaffiliated people live in one Asian country: China. China also is home to 50% of the world’s 488 million Buddhists and 73% of the 405 million global adherents of folk religions. Since China is the world’s most populous nation, it may not be altogether unexpected that it has a lot of people in a variety of categories. While China accounts for 19% of the world’s overall population, it is home to majorities of all Buddhists, unaffiliated people and adherents of folk religions.

More maps are at the link.


Reposted from Joe Jervis
Posted by oreydc at 4:05 PM No comments: Links to this post

Via JMG: Donations Pour In For Daniel Pierce

Early yesterday morning I posted the video of 20 year-old Georgia resident Daniel Pierce, who recorded his family as they verbally and physically abused him for being gay. Since then the clip has gone wildly viral with over 2 million views. The story has been picked up by the national press, fueling donations that stand at over $52K at this writing.


Pierce confirmed the video's details to the Huffington Post on Thursday, adding that he initially came out to his parents in October. But when his father, stepmother and grandparents attempted to stage a "delayed intervention" on Wednesday, things quickly went awry, which resulted in Pierce being attacked, disowned and thrown out of his house. "You're full of shit," Pierce's stepmother can be heard saying in the video. "You told me on the phone that you made that choice. You know you wasn't born that way. You know damn good and well you made that choice. You know that [your father] has done everything he can to raise you. ... He didn't need to blame himself." "Their reaction was pretty much expected [once] I chose to leave instead of pray because they have always been very vocal about not supporting the gay lifestyle," Pierce told the Huffington Post. "My [stepmother's] reaction was the most surprising and hurtful." Sadly, Pierce's story is not unique. While Pierce has confirmed that he is now safely staying with supportive friends and family members, there are many LGBT youths in America who face even more unfortunate circumstances. A 2012 study by UCLA's Williams Institute found that around 40% of homeless youths identify as LGBT, many of them having been rejected or abused by their family members over their gender or sexual orientation.


Reposted From Joe Jervis
Posted by oreydc at 1:44 PM No comments: Links to this post

"When you can look into the eyes of each member of your family constellation and sincerely thank them for everything, you will be ready to forget that you were ever born. This means that you will be ready to go beyond your personality and beyond human consciousness, and thus anchor divine consciousness. You will finally be able to remember your true identity, which is beyond your story, your body and your name."
Sri Prem Baba
Posted by oreydc at 10:39 AM No comments: Links to this post

Far from Dharma | August 29, 2014
At this moment in human history, the unrestrained extraction and burning of fossil fuels has brought us, in the industrialized nations, to the point where we are contaminating and pillaging the Earth to such an extreme that we are endangering all life on this planet. Nothing could be further from the intention and practice of dharma.
-Ven. Santussika Bhikkhuni, “Dharma in Action”

Posted by oreydc at 7:17 AM No comments: Links to this post