Via Just a Baha'i: What does Baha’i Scripture say about homosexuality?

Nothing. For Baha’is, Baha’i Scripture is everything penned by The Bab and Baha’u’llah, and the interpretations by Baha’u’llah’s son ‘Abdul-Baha, and where Shoghi Effendi (‘Abdul-Baha’s grandson) wrote in his capacity as official interpreter of Baha’i Scripture. It is a source of pride for many Baha’is to be able to state that we have authoritative scripture. That is to have access to the actual texts (or accurate translations of texts) as the sources for Baha’i Scripture.

“Unity of doctrine is maintained by the existence of the authentic texts of Scripture and the voluminous interpretations of ‘Abdu’l-Bahá and Shoghi Effendi, together with the absolute prohibition against anyone propounding “authoritative” or “inspired” interpretations or usurping the function of Guardian. Unity of administration is assured by the authority of the Universal House of Justice.” Universal House of Justice, to the National Spiritual Assembly of the Netherlands, March 9, 1965: Wellspring of Guidance, pp. 52-53

The only mention of homosexuality in authoritative Bahai text (not Scripture) is in five letters written by secretaries on behalf of Shoghi Effendi penned between 1949 and 1955.

“The exact status which Shoghi Effendi has intended the friends to give to those communications he sends to individual believers is explained in the following statement written through his secretary to the National Assembly on November 16, 1932:

“As regards Shoghi Effendi’s letters to the individual Bahá’ís, he is always very careful not to contradict himself. He has also said that whenever he has something of importance to say, he invariably communicates it to the National Spiritual Assembly or in his general letters. His personal letters to individual friends are only for their personal benefit and even though he does not want to forbid their publication, he does not wish them to be used too much by the Bahá’í News. Only letters with special significance should be published there.”
Published in the US Bahai Newsletter, No. 71, February 1933, pp. 1-2

However it is clear that Shoghi Effendi did not wish the status of these letters penned by secretaries to be confused with the authority of his own writing nor that of Bahai Scripture.

“I wish to call your attention to certain things in “Principles of Bahá’í Administration” which has just reached the Guardian; although the material is good, he feels that the complete lack of quotation marks is very misleading. His own words, the words of his various secretaries, even the Words of Bahá’u’lláh Himself, are all lumped together as one text. This is not only not reverent in the case of Bahá’u’lláh’s Words, but misleading. Although the secretaries of the Guardian convey his thoughts and instructions and these messages are authoritative, their words are in no sense the same as his, their style certainly not the same, and their authority less, for they use their own terms and not his exact words in conveying his messages. He feels that in any future edition this fault should be remedied, any quotations from Bahá’u’lláh or the Master plainly attributed to them, and the words of the Guardian clearly differentiated from those of his secretaries.”
Letter written on behalf of Shoghi Effendi, 25 February 1951 in The Unfolding Destiny of the British Baha’i Community, p. 260)

However if you do a search on the internet you will find Bahais stating that it is a Bahai Teaching that homosexuality is forbidden and many Bahais have told me that Baha’u’llah forbids homosexuality. If Baha’u’llah had written on the topic of homosexuality we would have access to this by now. I think it is a stroke of genius by Shoghi Effendi to have secretaries pen these letters so there can be no confusion with anything he penned himself. Shoghi Effendi also stated that not everything he penned [footnote 1] is to be considered as authoritative on a par with Bahai Scripture, but given that he did not write on the topic of homosexuality there’s no need here to discuss what should be considered part of the canon of Bahai Scripture.

So if homosexuality is not mentioned in Bahai Scripture why do so many Bahais think it is? Prejudice against homosexuality has been around for a long time so that’s one reason. Another is that in 1983 the compilation book “Lights of Guidance” was published. It is a valuable source of quotations however, unfortunately, the author doesn’t make distinctions between what is Bahai Scripture and what isn’t, and she presents the Bahai Teachings as list of rules. If this book is used as a way to locate sources, all good and fine. I use it myself in this manner. But if it is used as a book of rules… well see screenshot below.


Make the jump here to read the full article here
Posted by oreydc at 8:01 PM No comments: 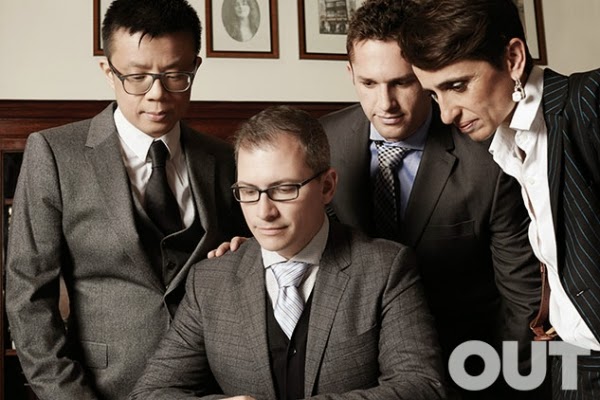 
Reposted from Joe Jervis
Posted by oreydc at 4:29 PM No comments:

Via JMG: Mormon Church Confesses: Yes, Joseph Smith Married As Many As 40 Women

The Mormon Church has finally formally acknowledged that its founder Joseph Smith married as many as 40 women, one of whom was only 14 years old at the time.


Elder Steven E. Snow, the church historian and a member of its senior leadership, said in an interview, “There is so much out there on the Internet that we felt we owed our members a safe place where they could go to get reliable, faith-promoting information that was true about some of these more difficult aspects of our history. “We need to be truthful, and we need to understand our history,” Elder Snow said. “I believe our history is full of stories of faith and devotion and sacrifice, but these people weren’t perfect.” The essay on “plural marriage” in the early days of the Mormon movement in Ohio and Illinois says polygamy was commanded by God, revealed to Smith and accepted by him and his followers only very reluctantly. Abraham and other Old Testament patriarchs had multiple wives, and Smith preached that his church was the “restoration” of the early, true Christian church. Most of Smith’s wives were between the ages of 20 and 40, the essay says, but he married Helen Mar Kimball, a daughter of two close friends, “several months before her 15th birthday.” A footnote says that according to “careful estimates,” Smith had 30 to 40 wives. The biggest bombshell for some in the essays is that Smith married women who were already married, some to men who were Smith’s friends and followers.

The revelation notes that Smith probably didn't have sex with all his wives as some of them were merely "sealed" into being his eternal wife in the next life. And on the next planet.


Reposted from Joe Jervis
Posted by oreydc at 4:11 PM No comments:

“The best way to help others is to do our own sadhana and focusing on our own lives, unless others come to us asking for help. When someone asks us for help, we must be careful not to get in the way of her path. In order for the other to navigate their path, they often need to fight great battles and to defeat many demons. Sometimes the other is hanging on by a thin thread of faith as their lower self insists on convincing them that they are in the wrong place. This fuels doubt, confusion and questioning as well as the skeptic within. Sometimes the lower self even acts through a ‘friend’ who comes to do away with whatever faith remained.”

Sri Prem Baba
Posted by oreydc at 9:30 AM No comments:

Posted by oreydc at 7:55 AM No comments: