Posted by oreydc at 4:12 PM No comments: Links to this post


Posted by oreydc at 12:57 PM No comments: Links to this post

“Desire is a bottomless pit: we are never satisfied and are always left wanting more. Regardless of whether these desires are aimed towards spiritual practices, they still involve gluttony and greed. This gluttony is at the service of numbing our systems so that we are unable to feel. When greed is aimed towards the material world, we attempt to fill the inner void by buying things, speaking or eating compulsively. When this voracity is directed towards spirituality, we endlessly seek new practices that will help relieve our suffering. However, it is precisely this approach that prevents us from finding our place in the world, relaxing, and receiving divine grace.”

- Sri Prem Baba
Posted by oreydc at 8:28 AM No comments: Links to this post

New Delhi, India, 16 January 2015 - This morning His Holiness the Dalai Lama gave a talk on Peace and Compassion and attended a prayer gathering at the Baha'i House of Worship in Baharpur, commonly known as the Lotus Temple. The Baha'i Faith was founded by Bahá'u'lláh more than a century ago in Iran teaching the oneness of God, the oneness of the human family, and the oneness of religion.
His Holiness was warmly received by Ms. Nazneen Rowhani, the General Secretary of Baha'i Faith in India and Ambassador Ashok Sajjanhar, Secretary of the National Foundation for Communal Harmony (NFCH).


Ms. Rowhani introduced His Holiness to an audience that included students from 14 different schools in Delhi, diplomats, school principals, and other guests as the light that beckons unity of all spiritual traditions.


"I usually don't like formality,” His Holiness began, “because we are all the same mentally, emotionally and physically. All of us have problems, physical and mental. No one is without problems. However, education enables us to view our problems from a wider perspective so we can deal with them.”


Looking at the many school children in the audience, His Holiness said,
"You are very important to humanity’s future. You are the generation of the twenty-first century. In you lies the hope of creating a better future for the world. It will fall to you to solve the problems created by my generation in the twentieth century."
His Holiness explained that the immense violence of the twentieth century arose largely due to short-sighted, narrow-minded thinking, when people only considered the narrow interests of their own group rather than those of humanity as a whole. He urged the younger generation:
“Concern yourselves more with the needs of others, with the needs of all humanity, and you'll have peace of mind. Selfishness creates a distance between us and other people, leading to suspicion and mistrust, ultimately resulting in loneliness. Think of others' well-being and you’ll be happy.

"Young brothers and sisters, think more broad-mindedly. Warm-heartedness and compassion are conducive to our physical and mental well-being, while anger, hatred, and fear are not. This is why some scientists today talk about warm-heartedness ensuring a 'healthy mind and a healthy body'.

"Because the existing education system is oriented towards materialistic goals we need to pay special attention to inner values such as tolerance, forgiveness, love and compassion. If we are to present these in a way that appeals to everyone we need to cultivate secular ethics. This is an approach followed in India for more than a thousand years, but which remains relevant today. India’s deep-seated tradition of ahimsa or non-violence is reflected in this age-old respect for all religious traditions and even the views of those who have no faith.”

Among questions from the audience His Holiness was asked how to cope with the threat of terrorism. He responded that many of the problems we face today are symptoms of our past mistakes. Resorting to the use of force, however decisive it may seem to be in the short run, is out of date, because violence only leads to more violence. Instead, whenever we face problems amongst ourselves, we should solve them through dialogue not force.
Hindu, Moslem, Buddhist, Christian and Baha'i prayers were recited in a number of languages including English, Hindi, Arabic and Sanskrit during a gathering His Holiness attended in the actual Lotus Temple after his talk.
Make the jump here to read the full / original article
Posted by oreydc at 8:13 AM No comments: Links to this post 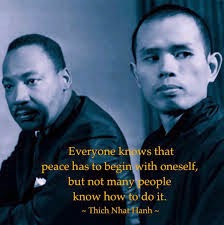 - Martin Luther King Jr., "A Sangha by Another Name"

Posted by oreydc at 8:03 AM No comments: Links to this post