Jimmy Fallon, The Roots, and Music Superstars Sing "We Are The Champions" (A Cappella)


In his fiscal 2016 budget, released Monday, President Barack Obama proposed allowing married same-sex couples to receive spousal Social Security benefits, regardless of which state they live in. Currently, married same-sex couples lose their benefits it they move to a state that does not recognize their unions. "The budget proposes to amend the Social Security Act to ensure all lawfully married same-sex couples will be eligible to receive Social Security spousal benefits, regardless of where they live," Obama's proposal states. "Under this proposal, such married couples would have access to these benefits," the budget says. Same-sex marriages are currently recognized in 36 states, as Bloomberg noted. The proposal would have to be approved by the Republican-led Congress to take effect.


Once again, President Obama has demonstrated his commitment to fairness and freedom for all Americans, including same-sex couples and their families. His proposal to ensure equal Social Security benefits would fix a crucial gap in federal protections for same-sex couples.President Obama's leadership in helping bring the freedom to marry to all Americans will be a shining part of this president's legacy. Of course, the only way to ensure same-sex couples nationwide have all the protections of marriage is for the Supreme Court to put the country on the right side of history by ending marriage discrimination throughout the United States, leaving no family and no state behind.


Reposted from Joe Jervis
Posted by oreydc at 6:32 PM No comments: 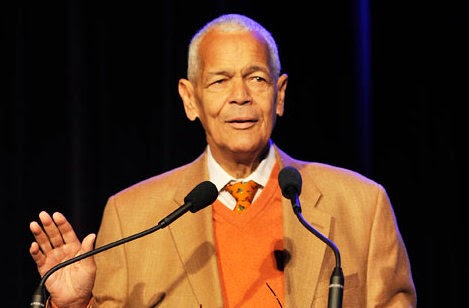 "The fight for basic civil rights is not a quest for superiority or an unvoiced desire for power. It is, at its root, a battle to raise us all up. We all deserve the right to try and fail, move forward and fall back, and ultimately succeed on our own merits and individual gifts. But for many of us, our ability to dream of a greater and more brilliant future is limited by the color of our skin, the texts of our religious tomes, and the gender of whom we love and who we are.

"The push for full equality for all Americans has always come with hurdles and setbacks. But we are not dissuaded from our path. LGBT Mississippians and their families yearn for a better day, one that we can work together to create. Let’s begin right now." - NAACP chairman emeritus Julian Bond, writing for the Jackson Clarion-Ledger. Hit the link and read the full op-ed.


Reposted from Joe Jervis
Posted by oreydc at 6:29 PM No comments:

Carl Sagan, Stephen Hawking and Arthur C. Clarke - God, The Universe and Everything Else (1988)

Neil deGrasse Tyson and Richard Dawkins - The Poetry of Science

14 glorious minutes of religious people getting served by Richard Dawkins

Via Tricycle: Was the Buddha an Atheist?

"The Buddha was an atheist."
Writer Allan Badiner made this bald pronouncement in the midst of a conversation that spanned the wee hours of a cloudless Burning Man night. Sitting in a vast tent where, during the day, scores of partygoers had washed off their dust and grime in a plexiglass chamber, we discussed prevailing notions of a Buddhist godhead and, conversely, our mutual embrace of the religion in its secular form.
I was most intrigued, though, by Badiner’s description of the Buddha as an atheist. I asked for sources.
Allan’s first response:

I would need time to do it, but there are passages from the Tripitaka that strongly indicate that the Buddha denied the existence of a creator god. Rather than classify him as an atheist or an agnostic, it would be more appropriate to use the term nontheist. An atheist believes only what he can see but, of course, the Buddha suggested that not all that you see is real.

I responded with enthusiasm and persistence: "I like nontheist—thanks—but do send me the citation when you can."
He did:

According to Stephen Batchelor’s Confessions of a Buddhist Atheist, on the few occasions in the [Pali] Canon . . . where the question of God is addressed, Gautama is presented as an ironic atheist. The rejection of God is not a mainstay of his teaching, so he did not get worked up about it. Such passages have the flavor of a diversion, a light entertainment, in which another of humanity’s irrational opinions is gently ridiculed and put aside. This approach stands in contrast to the aggressive atheism that periodically erupts in the modern West. The Buddha regarded questions about the cause of the universe, or other questions related to a creator god as not useful, in light of the more important task of bringing about the cessation of human suffering.

A few weeks later, at a conference on psychedelic research in Marin, California, I asked Insight Meditation Society cofounder Jack Kornfield the same question: "Was the Buddha an atheist?"
He responded later in an email, in his usual sweet manner:
"Yes, the Buddha was a nontheist. But he believed in and talked a lot about Brahma, King of the Gods and about other Gods . . .”
He continued, rather cryptically, with a quote from the Buddha himself: A star at dawn, a drop of dew, an echo, a rainbow and a dream.
Now we were getting somewhere, or perhaps nowhere, or maybe somewhere rather koan-istic.
Then Stephen Batchelor himself weighed in on our group email:

I’m happy you are happy with nontheist. The problems are manifold.  The term atheist as we use it today would not have been used in that way at the Buddha’s time. Nor, for that matter, would the concept nontheist. There are no equivalents for either in Pali or Sanskrit, though many Hindus today still regard the Buddha as a nastika, usually translated as nihilist but which means something like one who asserts there is nothing.
Again, the Buddha would have rejected this since he warns against the two extremes of atthi [it is] and natthi [it is not] and seeks to establish his dharma in the middle (madhyama), which does not lapse into the extremes of eternalism or annihilationism. The Buddha simply did not define himself or his teaching in such ways. So trying to capture him in these terms is bound to misrepresent him.
On the other hand, the only way we can talk about him and his vision is via the concepts of our own time and language, which has been the case throughout Buddhist history in the different countries in which it took root. I take nontheist to mean one who does not employ God as a necessary term in his or her teaching. In this sense, yes, the Buddha was a nontheist.
However since he is recorded in the Agganna Sutta as mocking and rejecting the very idea of God, he also comes close to being an atheist in the modern sense. It is probably best to drop trying to categorize the Buddha in any of these ways, to cultivate a healthy skepticism regarding views and opinions, and to concentrate on practicing the dharma instead.

Stephen, as usual, had cut through the Gordian Knot with that “practice the dharma” thing—or get over yourself with the intellectual stuff that leads to more intellectual stuff: the obsessional path. It stung like the smack of the keisaku provoking a kensho.
Then, some weeks later when I had almost given up, Bob Thurman, noted Columbia University Professor of Indo-Tibetan Buddhism, gave his view:

From the records we have, I think we can fairly say that Buddha was a non-monotheist—or non-creator-theist— and also a non-atheist, since he was in conversation with various gods quite often, actually one of his names was devamanusyanam shasta (Pali), or teacher of gods and humans. So the Buddha is an example of one who can be a theist while rejecting a creator. As I like to say, no one person is to blame for creating this whole mess—other than each of us, that is!

So there you have it—as close to the horses’ mouths as I can get. Pick and choose from atheist, nontheist, agnostic, non-creator-theist, and non-atheist; or make up one of your own.
Did I learn something from this? Yes. For one, as Stephen said, pinning the Buddha down to a specific category of belief is a difficult thing, because we live in a different time with a different set of values and a whole other language to express them. Therefore, we cannot know the Buddha directly as a historical personage. Moreover, Buddhism has been of such benefit to a variety of practitioners, its modifications and commentaries leaves grown from a single tree. Why hold the Buddha stuck in place? The dharma is a moving thing. And clearly, he, Gautama, touched its essence. For that wisdom we owe great gratitude to the Buddha, atheist or not, and all those who have breathed life into his path.

Phil Wolfson is a psychiatrist and secular Buddhist practitioner. He lives in the Bay Area.
Image: Chris Sorensen/Gallerystock


Please read the original article here
Posted by oreydc at 7:48 AM No comments:

Posted by oreydc at 7:37 AM No comments: