Via JMG: 81% Of College Freshmen Back Marriage 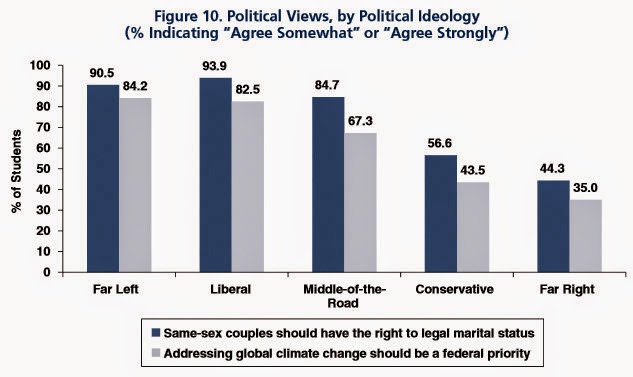 In its annual American Freshman Survey, UCLA researchers polled over 150,000 incoming freshmen at 227 colleges and universities. This year's result on marriage:


The survey last asked about same-sex marriage in 2012. In the interim, support for same-sex couples having the legal right to marry has increased 6.5 percentage points to 81.5%. This increase covers a span of time where the U.S. Supreme Court struck down part of the federal Defense of Marriage Act and California’s state ban on same-sex marriage. Additionally, since these Supreme Court decisions, state-level same-sex marriage bans have fallen across the country in U.S. Circuit and District courts; as of January 2015, the U.S. Supreme Court has agreed to take up four pending cases from the Sixth Circuit Court of Appeals. Figure 10 breaks support for same-sex marriage down by political ideology. The findings show that only students who identify as “far right” do not support same-sex marriage. Just 44.3% of students identified as “far right” either “agreed somewhat” or “agreed strongly” that same-sex couples should have the legal right to marry. This figure contrasts with 56.6% of “conservative” students, 84.7% of “middle-of-the-road” students, 93.9% of “liberal” students, and 90.5% of “far left” students. It is clear that same-sex marriage is no longer an issue for the vast majority of entering college freshmen.

We can't wait for Tony Perkins to spin this one.


Reposted from Joe Jervis
Posted by oreydc at 11:15 PM No comments: Links to this post

Posted by oreydc at 9:29 AM No comments: Links to this post

"By deepening the practice of self-observation, we may reach the surprising conclusion that we feel pleasure through our negative actions in the world. There is a pleasure connected to the negative situation that repeats itself in our lives. Our vital energy is invested into this destructive action. As we deepen even further into this practice of self-observation, we realize that this may be the only way we know how to feel pleasure. Oftentimes, the positive manifestation of pleasure is a threat to the human being. Since we are so identified with this negativity, we suffer the terror of being annihilated in its absence. Unconsciously, we believe that letting go of this negativity would mean death."
- Sri Prem Baba
Posted by oreydc at 9:14 AM No comments: Links to this post

Posted by oreydc at 7:32 AM No comments: Links to this post