Posted by oreydc at 9:55 PM No comments: Links to this post

Via Huffington: Hate the Gays? Imagine the World Without Us


In our current political discourse, right-wing politicians continue to demonize the LGBT community in sad and desperate attempts to rally their base. While, happily, their efforts have not been as effective as in the past, any attempt to make gay, lesbian, bisexual, or transgender people feel anything less than equal can lead to devastating consequences, as the ongoing string of youth suicides so painfully highlights.

Any preventable loss of dignity and human life must be stopped. The question is, "How?"

While prior efforts have focused on the issue of harassment, it is time for the LGBT community to take the dialogue one step further. When you are a teen, simply waiting for your next birthday can seem like an eternity. Telling our youth that life will indeed get better, some years into the future, is not enough. We must instead create a world in which there is no longer any shame in being gay. We must show that each and every one of us has something of value to contribute to this world, period.

The first step is creating discussion with the haters around where their anti-gay beliefs come from, and challenging those beliefs with facts. But we then need to take that dialogue even further and examine more closely what they hope that such convictions will ultimately achieve.

With either group, the case can be made to counter such beliefs with facts. For example, those who believe that being gay is unnatural may be surprised to learn that homosexual activity has been observed in close to 1,500 species, and that such scientific certitudes should be spotlighted. For those who believe that homosexuality violates religious principles, pointing to texts such as the Bible as justification, and dialogue around translation issues, intent, and historical context, might be beneficial.

However, in both situations, while factual evidence might change some minds, most will still be unwilling to let go of long-held beliefs. My question to them then becomes, "What do you hope these beliefs will achieve?"

Make the jump here to read the full article
Posted by oreydc at 7:31 PM No comments: Links to this post


Randy W Berry, who is gay, has been appointed to the senior role within the US State Department by President Barack Obama and Secretary of State John Kerry. He has previously served as Consul General in Amsterdam, and has also had postings for the State Department in Bangladesh, Egypt, Uganda, South Africa, and Washington DC. John Kerry said: “Randy’s a leader, he’s a motivator. But most importantly for this effort, he’s got vision. Wherever he’s served — from Nepal to New Zealand, from Uganda to Bangladesh, from Egypt to South Africa, and most recently as consul general in Amsterdam — Randy has excelled."


“At a moment when many LGBT people around the world are facing persecution and daily violence, this unprecedented appointment shows a historic commitment to the principle that LGBT rights are human rights,” said HRC President Chad Griffin. “President Obama and Secretary Kerry have shown tremendous leadership in championing the rights of LGBT people abroad. Now, working closely with this new envoy, we’ve got to work harder than ever to create new allies, push back on human rights violators, and support the brave leaders and organizations that fight for LGBT rights around the world."

IGLHRC does the same:


“The appointment of Randy Berry as a special diplomatic envoy brings to a pinnacle the historic trend, first put in motion by the 2011 Presidential Memorandum, of integrating the rights of LGBT people into U.S. foreign policy. Having long advocated for this step forward, we at the International Gay and Lesbian Human Rights Commission celebrate its arrival and congratulate Mr. Berry on his new role. The U.S. envoy can contribute to a new era in which the conscience of governments everywhere can be focused on the destabilizing impact of prejudice and abuse that inflicts suffering on millions worldwide. Human rights should be a priority for every government in both domestic and foreign policy.

Hate groups have already denounced the creation of the position as yet another example of the Obama administration imposing its homofascist agenda on foreign countries.


Reposted from Joe Jervis
Posted by oreydc at 4:26 PM No comments: Links to this post

Via THE BEER PARTY / FB: 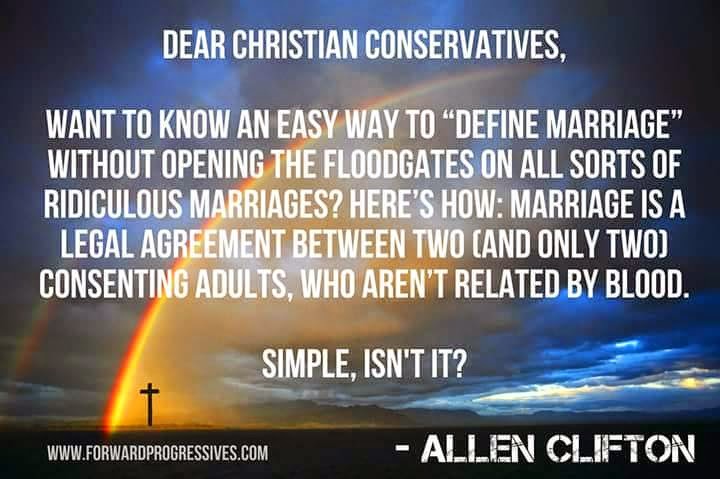 Posted by oreydc at 3:13 PM No comments: Links to this post


Posted by oreydc at 1:47 PM No comments: Links to this post

"I’m not gay, but I’ve never talked publicly about depression before or any of that and that was so much of what the movie was about and it was one of the things that drew me to Alan Turing so much. I think we all feel like weirdos for different reasons. Alan had his share of them and I had my own and that’s what always moved me so much about his story.” - Oscar-winning screenwriter Graham Moore, speaking to Buzzfeed. Moore's "it gets better" acceptance speech led many (including numerous media outlets) to wrongly assume that he is gay. At this writing #StayWeird remains a top-trending hashtag on Twitter.


Reposted from Joe Jervis
Posted by oreydc at 1:43 PM No comments: Links to this post


Posted by oreydc at 1:08 PM No comments: Links to this post

Via Tricycle: Nothing Need Be Done

Nothing Need Be Done

A 1988 interview with Gary Snyder, from the newly published anthology Nobody Home: Writing, Buddhism, and Living in Places

A 1988 interview with Gary Snyder, from the newly published anthology Nobody Home: Writing, Buddhism, and Living in Places

One morning in 1984, a letter posted on the other side of the world clacked through the flap of my door in Cape Town. It was from the poet, environmental activist, and longtime Buddhist Gary Snyder, a warm response to questions about his writing. I was a graduate student at the time and had been reading his work after a friend gave me a copy of his 1967 collection A Range of Poems. That first letter was the beginning of a long long-distance friendship and an ongoing conversation.

It started as an intellectual exchange and became an exploration of practice. As a young person living in a society demarcated by the paranoid logic of apartheid, I found it refreshing to meet the spaciousness of Gary’s way of seeing. His delight in wildness. Poems that opened up the idea of social justice to include nonhuman beings and the living world. The truly radical realization that things are not things but process, nodes in the jeweled net. And in all this a tendency simply to walk out of the narrow prison of dualistic thought.

Over the years, what has kept on bringing me back to Gary’s writing and to our conversation is his steady articulation of this vision in practice: Buddhist practice, the practice of writing, of being a householder, of living in places.

Nobody Home: Writing, Buddhism, and Living in Places puts together three interviews and a selection of letters from around 30 years. We recorded the first interview, an adaptation from which follows, in 1988 at Kitkitdizze, Gary’s home on the San Juan Ridge in the Sierra Nevada, where he is also a member of the Ring of Bone Zendo. It was a hot day in late August, and Carole Koda, his new partner, sat listening throughout.


Make the jump here to read the full article
Posted by oreydc at 12:51 PM No comments: Links to this post

Posted by oreydc at 7:03 AM No comments: Links to this post