Via JustaBahai: Critiquing the Universal House of Justice

Abdu’l-Baha said that we must obey the Guardian to safeguard the “mighty stronghold,” the Baha’i community. The same could be said of obedience to the House of Justice, which is the Head of the Bahai community today. Baha’u’llah and Abdu’l-Baha wanted to avoid the problems other religions had of being torn into schisms, so they emphasized obedience very strongly. It doesn’t mean that Bahais can’t think for themselves.

So I am free to disagree and to critique, but I am not free to go and claim any form of leadership or a new Bahai religion. I am also not interested in any ideas associated with what might be called reform because I see no need for these. My arguments and the ideas I express on my blog here as just a Bahai aim to follow Baha’u’llah’s pleas for each of us to be “an upholder and defender of the victim of oppression” (Baha’u’llah, Epistle to the Son of the Wolf, p. 93)

And so to the letter, dated 9 May 2014, penned by the secretariat for the Universal House of Justice which I will critique.

A letter, dated 18 May 2015 from the National U.S. Bahai administration has already been widely circulated in diverse online Bahai groups and e-lists. It states:

“A four-page letter from the Universal House of Justice on the subject of homosexuality has recently been receiving wide circulation via the Internet and through personal email lists, and we are increasingly being asked to comment on its authenticity.
The letter—dated May 9, 2014, to an individual believer in response to a personal inquiry—was indeed issued by the Supreme Body through its Department of the Secretariat. We enclose it here for your reference.”

Make the jump here to read the complete posting at JustaBahai
Posted by oreydc at 9:47 PM No comments:

Via JMG: IRELAND: And Now We Wait 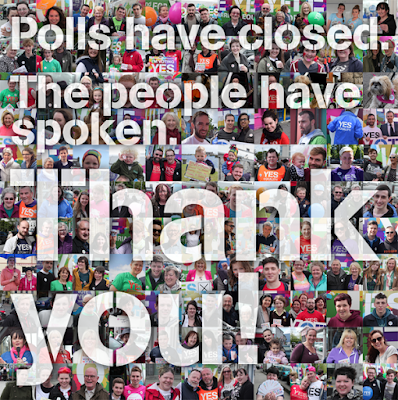 Counting of the ballots begins at 9AM local time and the final result should be known by midday. I'll be up very early to begin my reporting so readers on US west coast might want to check in here when you stumble in from the bars. Voter turnout today was very encouraging:


Minister for Communications Alex White, the director of elections for the Labour Party, said he had been monitoring his Dublin South constituency. “It seems likely that turnout will finish as high, if not higher than in the general election. I think something very big happened in Ireland. A whole new generation has been politicised.” Those on the No side also acknowledged that the large turnout in Dublin, in particular, was likely to tip the balance in favour of a Yes. Tipperary Independent deputy Mattie McGrath, one of only two TDs who publicly called for a No vote, said it looked likely that the high turnout in Dublin would carry the proposal.
“It should be good for a Yes if there is a high Dublin turnout,” Mr McGrath said. “The polls were saying 80-20, 70-30, even if it is 60-40 it would be a fine vote for No, but we’ll have to wait and see what happens later when the boxes are open.” Senator Rónán Mullen, also on the No side, said committed No voters had turned out, as well as those strongly for a Yes, and said many in urban areas were not in favour of same-sex marriage. Minister for Health Leo Varadkar said he was “quietly confident but almost afraid to believe it in case it goes the wrong way”. He added: “Turnout was good and younger voters turned out in big numbers.”

Whatever the result, we will always stand in awe of the fantastic messaging and tactics of Yes Equality and their allies. We've never seen a marriage campaign that was pulled off so skillfully or one with such an adept usage of social media. And when else, in the history of everything, have we ever seen every major political party and almost every major elected official walk proudly into the rainbow-hued light? True, Ireland is a small country and activists there had the definite advantage of having seen what worked and what didn't in other countries. But every Yes Equality supporter can go to bed tonight happy in the knowledge that, as Panti Bliss put it, they could not have done more.


Reposted from Joe Jervis
Posted by oreydc at 7:31 PM No comments: 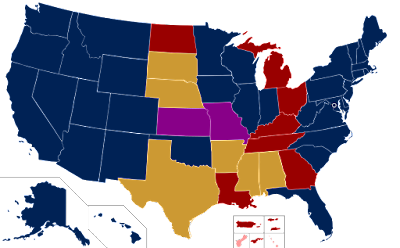 The last time Wikipedia updated its marriage map, I mused that it was probably the last change we'd see before SCOTUS rules. However following yesterday's stayed decision in Alabama, the map monitors have advanced the state from purple to mustard. In case you are wondering, it was back in January when Alabama went from red to sapphire.


Reposted from Joe Jervis
Posted by oreydc at 5:58 PM No comments: 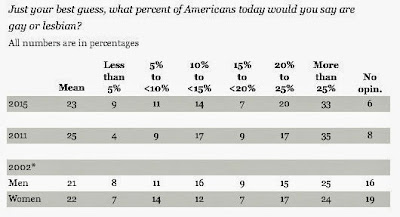 
The American public estimates on average that 23% of Americans are gay or lesbian, little changed from Americans' 25% estimate in 2011, and only slightly higher than separate 2002 estimates of the gay and lesbian population. These estimates are many times higher than the 3.8% of the adult population who identified themselves as lesbian, gay, bisexual or transgender in Gallup Daily tracking in the first four months of this year. The stability of these estimates over time contrasts with the major shifts in Americans' attitudes about the morality and legality of gay and lesbian relations in the past two decades. Whereas 38% of Americans said gay and lesbian relations were morally acceptable in 2002, that number has risen to 63% today. And while 35% of Americans favored legalized same-sex marriage in 1999, 60% favor it today.

Only 9% of respondents estimated the LGBT population to be under 5%.


Reposted from Joe Jervis
Posted by oreydc at 5:30 PM No comments:

The polls close in 90 minutes.


Reposted from Joe Jervis
Posted by oreydc at 5:26 PM No comments:

Today in "I am so proud of you Steve!" this:

From my gay dad/mentor who is a Deacon in the Episcopal Cathedral of Sacramento, California: