Politico reports that the idea to bathe the White House in rainbow lights was conceived months ago.


SPOTTED, at 4 a.m. Sat. at the White House: Jeff Tiller, 32, the White House director of specialty media (includes LGBT outreach) and former press-advance marvel, who had the inspired idea of bathing the North Portico (“The President’s Front Door”) in rainbow lighting. The crowds were gone, sunrise was coming, and the lighting contractors who had installed the rainbow were long asleep. After spending the night at the White House in a lawn chair, Jeff climbed downstairs to the tradesman entrance to unplug the lights that he had conceived of months earlier.

You can thank Tiller on Twitter. (Tipped by JMG reader Mike)


Reposted from Joe Jervis
Posted by oreydc at 10:24 PM No comments: Links to this post

JMG Headline Of The Day 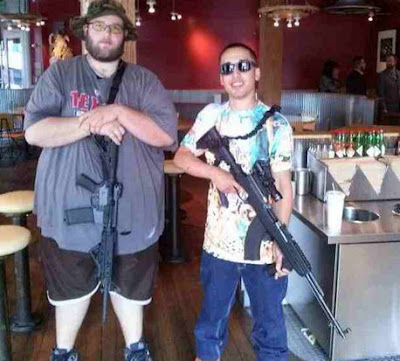 
On June 26, the Supreme Court issued a decision in Obergefell v. Hodges, holding that the Fourteenth Amendment requires that states issue marriage licenses to same sex couples. Conservative media and the National Rifle Association (NRA) quickly seized on the decision to draw a parallel with concealed carry reciprocity, a top federal legislative priority of the NRA. Reciprocity legislation, also known as federally mandated concealed carry, would force states to recognize permits to carry concealed guns issued by other states, regardless of what the issuing state's standards are for issuing permits. Reciprocity legislation has been introduced in both chambers of the U.S. Congress, but conservative media and the NRA view Obergefell as an opportunity to argue that the Constitution extends at least some right to reciprocal permit recognition regardless of whether Congress acts. The problem with that argument, however, is that the 2008 landmark Supreme Court case District of Columbia v. Heller limited the scope of the Second Amendment right to gun possession to people's homes.


Reposted from Joe Jervis
Posted by oreydc at 10:18 PM No comments: Links to this post

Via WAPO: For Obama, rainbow White House was ‘a moment worth savoring’ 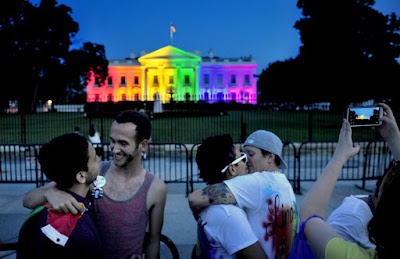 With a colorful White House backdrop, (L) Kevin Barragan and his partner Adam Smith celebrate as do Kelly Miller (with glasses) and her wife Lindsey Miller. The Millers were married two years ago in Washington state where gay marriage is legal. The White House was lit in multi-colored lights to honor the Supreme Court decision to allow gay marriage, on June 26, 2015. (Michael S. Williamson/The Washington Post)
For Obama. seeing the White House illuminated in rainbow colors Friday night "was a moment worth savoring."

Speaking at a joint news conference Tuesday with Brazilian President Dilma Rousseff, Obama made a point of saying just before leaving that one of the best aspects of last week was viewing the crowds who had gathered in front of 1600 Pennsylvania Avenue to celebrate the symbol of gay pride on full display.

[The White House turned into a rainbow Friday night (Video)]

Make the jump here to read the full article
Posted by oreydc at 10:09 PM No comments: Links to this post


Posted by oreydc at 1:47 PM No comments: Links to this post


Over the past three days, 26 million people have super imposed rainbows over their Facebook profile pictures using a free tool provided by the company. The rainbow filter launched Friday and continued to gain steam over Pride weekend, garnering more than half a billion likes and comments all over the world. Famous people including Russell Simmons, California Attorney General Kamala Harris, Leonardo DiCaprio, and Arnold Schwarzenegger, and Brazil's president Dilma Rousseff changed their profiles. The tool was created by two Facebook interns during an internal hackathon last week. Changing a profile picture is easily dismissed as low-effort activism. But for many people who are not typically political it was a way to quietly show support.


Reposted from Joe Jervis
Posted by oreydc at 1:44 PM No comments: Links to this post

Via : Michael Coren: My unlikely sermon at the Metropolitan Community Church

Former outspoken social conservative Michael Coren found ‘no condemnation, no cynicism, no grudges’ when he recently spoke at a church focused on outreach to LGBT people.

Toronto Star / Paulo Marques
Journalist Michael Coren recently delivered a guest sermon at the Metropolitan Community Church.
By: Michael Coren Published on Mon Jun 29 2015
There she goes: plump, porky and with wings. Yes, pigs can and do fly. Or to put it another way, we now have undeniable proof of climate change because hell has frozen over. Michael Coren, long a public opponent of same-sex marriage and certainly not considered a friend to the gay community, is asked to preach at Toronto’s Metropolitan Community Church.

MCC is not exclusively gay but its central theme, its charisma if you like, is outreach to LGBT people and in all of its many international branches it is at the heart of the struggle for full equality. Indeed in Toronto its leader, Brent Hawkes, is one of the most high-profile, visible and eloquent leaders of the gay community.

It was Brent who invited me. I have written before about how in the past two years I have undergone something of a conversion on the road to Toronto, left the Roman Catholic Church, abandoned social conservatism and become one of those liberal Christians I used to mock. It’s been a pilgrimage and one that — while coming with a heavy professional and personal cost — has made me a better person and a better Christian.

I came to realize that anywhere there is love there is God, that judgmentalism is vehemently anti-Christian and that I had, well, got it wrong. In one of those glorious paradoxes my feelings were confirmed by the sweeping, organized and vicious campaign against me by social and Christian conservatives. By their lack of love you will know them. Which is when Brent approached me and asked me to speak. We have known each other for years because we often appeared on opposing sides on television and radio; neither of us ever thought we’d be embracing, close to tears, in front of the altar of his church.

I’ve spoken to hundreds of groups and haven’t felt nervous for decades. Yet suddenly this 56-year-old man who hosted a nightly television show for 16 years was most definitely nervous. How many of these people had I hurt, how many had lives made more difficult by my writing and broadcasting? I’d never hated but I had given an intellectual veneer to the anti-gay movement, had enabled — even unintentionally — some muddy bigotry.

There were two services, with a combined congregation of around 700. And as I walked in on that hot, rainy morning I was drenched in love and acceptance. No condemnation, no cynicism, no grudges. As a constipated Englishman I was several times close to weeping as I witnessed a sense of authentic Christian community that I have, with all due respect, seldom found in mainstream church settings. I saw collectives of warmth and support, groups of people from various ethnicities, backgrounds, sexualities and experiences united in acceptance. After three months of abuse, accusations and firings from men and women who claim to be Christian my sense of liberation was exquisite. A dawn of the miraculous after the dark night of the cruel.

I told them that as a straight man who had reversed his position on gay rights and marriage I had recently experienced a glimpse of a shadow of a whiff of what it must be like to be a gay Christian. I said that some of the finest Christians I had ever met had been gay Christians. I said that remaining Christian in the face of hostility and even vitriol was an indication of enormous depth of faith and a living, fleshy example of a glorious mystery. I spoke of unconditional love, of what Scripture actually said about sexuality rather than the popular and misguided caricature of Biblical truth, I said that the only absolutes were grace and love.

The point is that in the 200,000 words of the New Testament perhaps a mere 50 in any way concern same-sex attraction, yet tens of thousands speak of charity, care for the poor, forgiveness, love, empathy, gentleness and kindness. At its best the church has led the way for the state but on this issue the contrary is true, as we witnessed with the recent U.S. Supreme Court decision. There is still time to do the right thing however. As I said, pigs can fly and Michael Coren can speak at the Metropolitan Community Church.

Michael Coren can be contacted at mcoren@sympatico.ca

Make the jump here to read the  full and original article
Posted by oreydc at 1:30 PM No comments: Links to this post 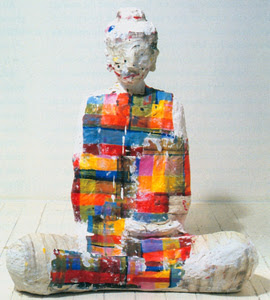 The paradox of our practice is that the most effective way of transformation is to leave ourselves alone. The more we let everything be just what it is, the more we relax into an open, attentive awareness of one moment after another.

-  Barry Magid, "Five Practices to Change Your Mind"
Posted by oreydc at 7:40 AM No comments: Links to this post