Via Holy Bullies and Headless Monsters: The real story behind lgbt equality struggle is being ignored


Last night, I made the discovery that my work was used in a letter to the editor in the Grand Forks Herald:

The Huffington Post's Alvin McEwan characterizes the ACP as "a sham group camouflaging religious right distortion as legitimate research" and cites University of Minnesota professor Greg Remafedi, who claims the group has "distorted his work." And in fact, the list of scientists whose research has been distorted to support the religious right's bigotry against the LGBT community is staggering.

It was pretty cool to be cited and obviously the young lady read my online booklet, How They See Us, because she cited info from page 10 regarding the list of researchers whose work have been distorted by the anti-gay right.

But then the euphoria faded and I got a bit angry. Not at her, mind you, but the situation in general.

On two pages, I listed at least 12 examples over a number of years in which anti-gay groups and personalities have been caught lying about or distorting research.  How in the world did the media, including ours, miss this?

Do journalists dig for information anymore? While we busy ourselves with esoteric terms, while those who claim to be our allies (i.e. Kirsten Powers) write sloppy books hoping to follow the trend of fake pity for anti-gay groups and organizations who finally themselves out of the mainstream, and while those same anti-gay groups and organizations (and their allies at places such as Fox News) spin false stories of anti-Christian persecution at places such as bakeries, the real story seems to be getting ignored.

That real story is the over 30 year history of lies, distortions, and bearing of false witness by anti-gay groups designed to stigmatize the lgbt community.  Until THAT story is told, no matter how many victories we win, the lgbt community will always find ourselves on the defensive, trying to justify not only our existence but our right to have a normal life.
Posted by oreydc at 5:51 PM No comments: Links to this post 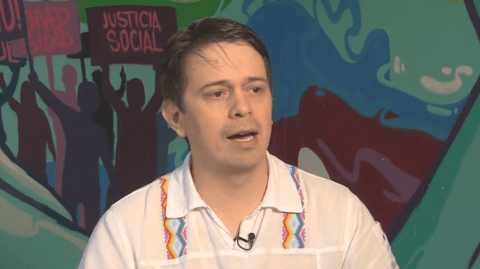 A Paraguayan LGBT activist is in high spirits after his historic public meeting with Pope Francis over the weekend.

The Washington Blade reports Simón Cazal, who heads Paraguay’s LGBT group SOMOSGAY, was among the 1,600 civil society leaders who met with Francis in the capital of Asunción on Saturday.


Cazal told the Washington Blade during a Skype interview after the meeting that Francis did not “directly” refer to LGBT-specific issues, but “he did mention others in which they are included.” Media reports indicate the pontiff was sharply critical of Paraguayan Catholic officials.
“There are no people of first, of second or third class,” said Francis, according to a tweet that Cazal posted to his Twitter account after the meeting. “Dignity is for everyone.”

Cazal added that the pope’s speech was “very productive” and focused on the church embracing diversity in the idea of “family.”
In a separate interview with Buzzfeed, Cazal stated his belief that after the meeting the church “has put itself on our side – there is no way to discount that.”

This was the pope’s first ever meeting with an LGBT activist. Back in March, Francis dined with LGBT inmates at an Italian prison.

Watch a video of Cazal speak with CNN before his historic meeting here.

Make the jump here to read the original
Posted by oreydc at 5:49 PM No comments: Links to this post


Posted by oreydc at 12:55 PM No comments: Links to this post

JMG Viral Video Of The Day


"Two guys pretend to be homosexuals in Russia." Nearly 900K views at this writing. Click on the closed captioning.

Reposted from Joe Jervis
Posted by oreydc at 11:33 AM No comments: Links to this post

The Intention beneath Belief
Read More

Posted by oreydc at 9:17 AM No comments: Links to this post