Via WGB: America, the Hateful 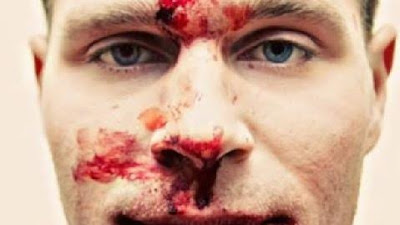 
Part I
Seventeen years ago today, a college student died from his injuries after being abducted by two men, bound to a fence, beaten beyond recognition, and left to freeze in the Wyoming night.  According to police reports, the only part of Matthew Shepard’s face not covered with blood when they found him was where his tears had washed it away.
Two years ago, a Texan lured a man to his house; imprisoned and bound his wrists with an electrical cord. He brutally beat him, causing numerous skull/facial fractures before throwing the man in the trunk of his own car and driving to a friend’s.  The victim, A.K., was eventually taken to an EMS station and survived after spending ten days in the hospital.
Both men were targeted for violent and vicious crimes because of who they were, because they lived openly, because they were gay.
And while the perpetrators were brought to justice and imprisoned, little has lessened the occurrence of hate crimes against LGBTs in America, not even with the passage  of the Shepard/Byrd Federal Hate Crime Prevention Act in 2009.  What it has changed is the way federal hate crime data is collected and reported, and the numbers are nearly as shocking as the crimes themselves.
FBI Hate Crime Statistics 2013, released last December, showed 20.8% of the nearly 6,000 reported hate crimes were related to sexual orientation, 1,402 in total, 60.6% of which were against gay men specifically.  Break it down and someone in the LGBT Community is victimized roughly every four hours in America.
What’s more, these statistics may dramatically underappreciate the size of the problem as they only account for reported incidents that have been classified by police as hate crimes. In an article from June 22, 2015, on vocative.com, Senior Fellow, Mark Potok, of The Southern Poverty Law Center said, based on Bureau of Justice survey statistics, “The best estimates suggest that the real number of hate crimes are up to 40 times larger than the numbers contained in the FBI reports.”
A recent article in Time magazine (Aug 17, 20015) quoted, Shannon Minter, Legal Director for the National Center for Lesbian Rights as saying, “ Most state laws don’t require the collection of such [hate crime] statistics.”  Mara Keisling, of the National Center for Transgender Equality went on to say, “A lot of jurisdictions report zeroes, even in places where we know there are hate crimes.”
According to Human Rights Campaign website, “Currently, 15 states have laws that addresses hate or bias crimes based, but do not address sexual orientation or gender identity. Only five states (Arkansas, Georgia, Indiana, South Carolina and Wyoming) don’t have laws addressing the scourge of hate crimes.”
It’s interesting to note the dichotomy of hate crime incidents vs location as well.  States like California, New York, and Massachusetts which rate as most LGBT “friendly” are also consistently in the top ten places reporting hate crimes.  By contrast, states like Mississippi report little to no incidents of hate crimes.  Has the Southern Bible Belt suddenly become a bastion of LGBT acceptance?
One possible explanation may seem counterintuitive but holds a good deal of merit.  In “friendly” states LGBTs feel free to live out and openly making them A) more visible targets B) more likely to actually report hate crimes and C) find  sympathetic law enforcement with the training to address LGBT issues.  In conservative/religious/rural areas with open animosity towards LGBTs and the equality they’ve gained, the opposite of all three is likely to be true.
Case in point…  Bromwell antique store in Cincinnati Ohio, a pro-gay business displaying the pride colors, was vandalized two days after the SCOTUS marriage equality ruling in June.  While it was the only store front damaged on the street, police are not treating it as a hate crime and at least one City Councilman questioned the claim.
2015 may not be the turning point in LGBT equality and justice under law that the Community had hoped.  Part II of “America, the Hateful” will look at what the future may hold and the challenges it brings with it.

Read the oroginal at WGB: here
Posted by oreydc at 4:08 PM No comments: Links to this post

Two of my favorite Spiritual Teachers in dialogue with one another. Ram Das interviews Thich Nhat Hanh.

Posted by oreydc at 3:26 PM No comments: Links to this post

A Dialogue with Ram Dass and Eckhart Tolle


Posted by oreydc at 2:54 PM No comments: Links to this post

In the Face of Chaos - Full Lecture


Posted by oreydc at 2:53 PM No comments: Links to this post

Ram Dass on Being Love


Posted by oreydc at 2:51 PM No comments: Links to this post

“When we are able to look at what is transitory without getting identified with it, we will have found the exit from the labyrinth of the mind that keeps you hostage to negative patterns. We could summarize the spiritual search into one word: detachment. To be identified is to be attached. We are attached to our thoughts, feelings, sensations and everything that happens to us. The mind has the tendency to hold onto these experiences and keep them alive, and our work is to let it all pass. Just as the sky observes the clouds as they pass without going with them, we observe our thoughts without becoming identified with them.”
Posted by oreydc at 1:59 PM No comments: Links to this post

Extending Arms and Hearts
Read More
Posted by oreydc at 1:52 PM No comments: Links to this post