Family dinner, a time to reconnect 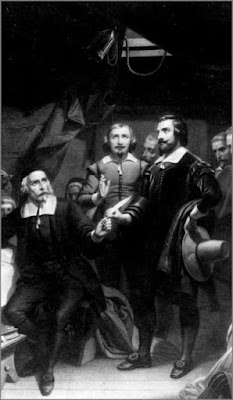 In 1637, two male colonists at Plymouth faced conviction for a serious moral crime, a crime that could have led to their execution. Thomas Roberts and John Alexander were in love; caught expressing their love in a sexual relationship was their only crime.

Plymouth was still a small English colony; they all knew each other and so the judge was hesitant to impose the maximum sentence of death. However, the judge did not go lightly on either of them. Neither man was sentenced to death for being gay, but Alexander, labeled the “seducer”, was branded with a hot iron and banished from the colony. Roberts, the slightly less “guilty” of the two, was forbidden to own land or vote. Roberts was eventually considered “reformed” and his rights were re-instated, probably to encourage him to stay. The small colony needed very strong pair of hands it could get to survive.


Author Paul Monett once wrote that most of gay history “lies in shallow bachelors’ graves.”
Be grateful on this Thanksgiving day, we've come along way from 1637. (Source)
Read the orginal and more on WGB here
Posted by oreydc at 7:46 PM No comments:

There are three matters I would like to discuss in my letter. First, it is long overdue that I officially write a letter to resign from the Faith. I have embraced the investigation of truth since I was 12.

When I was 18, the Baha’i Faith found me, and it resonated with my heart. After being embraced by the amazing community in Baltimore, MD, and immersed myself in the love of the Faith, I became a Baha’i within a year. I made a fatal assumption at the age of 18, however. Considering the acceptance of all people in the Faith, and the amount of love I experienced when I met the Baltimore Baha’i’s, I assumed that the LGBT community was fully accepted, embraced, and allowed to be themselves. Soon after becoming a Baha’i, I learned that was not true. I was devastated, and contended with the issue for many years. I tried to find reconciliation, and made justifications and excuses despite how much it hurt my heart and soul--but I still stayed a Baha’i.

When I was 26, something strange and unexpected happened. I began to be able to see, hear, and communicate with other-dimensional beings (spirits, angels, ghosts--whatever you feel comfortable calling them). I was scared, and I sought comfort and understanding in the Baha’i writings, but I was left without such things. In fact, Abdu’l Baha said there were no such things as ghosts. How could that be when I see them everywhere? I was distraught, and considering I have always continued my investigation of truth since I became a Baha’i, I ventured elsewhere for answers. This journey took me to some incredible places, but my research was quickly drawing me away from the Faith. I resonated most with near death experience stories (first of which was Renee Pasarow’s NDE!) that confirmed all of the information I was gathering as my medium abilities opened up. Paired with this, I have been a Reiki practitioner since I was 16, and a Master by 27, and my healing abilities began transforming and transcending along with my expansion of consciousness. Near death stories continued to confirm and expand my understanding of healing.

The existence of many kinds of multidimensional beings and the phenomena of past lives have all been confirmed. These are now facts in my life that I must accept to be who I am, and do what I do.

The Faith does not support these beliefs. This investigation has also led me to the knowledge that my heart knew all along, and science, of course, has been confirming: being gay is okay, natural, and accepted by God. In fact, many of the rules established in most religions serve no Divine purpose--only that of the ego. And since then, I choose to live free of the egoic constrictions of any religion, as I see that they do not serve me, only hurt me.

I believe that Baha’u’llah and the Manifestations before and after Him are great Masters--and in their unbound Spirit, they are better at being these great Master-- however, I believe that any Spirit residing in the flesh can still only profess spiritual truths through the filter of the human ego. As conscious as Baha’u’llah was, He still saw the world through the lens of His relationship between his Spirit and His ego while residing in the body, thus increasing the fallibility of any Manifestation’s word--and this includes the perceptions of experiences during a near death event, and undoubtedly my own spiritual experiences. I approach everything from a scientific perspective, and I am a natural skeptic. When I read near death stories, I don’t take each singular story verbatim.

The truth lies within the innate essence of all the stories. The similarities. The ultimate truths that pervade outside of the realm of ego, human error, and perception. I see these same similarities and truths among the many faiths and religious institutions, which are the heart and meat of all that truly matters.

Based on the accounts of stories like Howard Storm’s near death event, a Baha’i belief was confirmed: that all religions are right and serve a purpose in their own way. Therefore, I still hold great respect for the Faith, and I believe that those who feel they must be Baha’i, Christian, Muslim, etc. in their hearts, must indeed be to serve their purpose, and experience life as they were meant to.

We all come here with a desire to experience this earthly realm through particular filters, and the choice of religion and spiritual beliefs is one of those filters. There are only some faiths that delay the soul from uniting with Oneness, but the Baha’i Faith, I assure you, is not one of them.

I am grateful for the role the Faith has played in my life, these last 11 years. It has served my growth. My journey now has taken me away from the Faith as I continue to learn, investigate, grow, and be true to my purpose. I do not wish to be contacted by any Baha’i members, especially by those part of this area’s Local Spiritual Assembly--to which I will explain why with my third matter.

While I respect the growth and journey of the Baha’i Faith, I cannot complete my letter without addressing the harm the Faith does by adhering to its outdated beliefs and treatments toward the LGBT community. All the science one could ever need is available, and I am sure many hurt and disgruntled people have sent all the scientific research showing the natural existence, and necessity of people who identify within the LGBT spectrum. When I researched data, I found that it is natural in many mammals to have a small percentage of gay spectrum animals, and they often provide surrogate families for abandoned young (Bagemihl, 1999). When I applied this to humans, I took the number of estimated gay couples in the US, and paired it with the number of children currently in foster care. If just a quarter of estimated gay couples adopted 2 kids each, there would be NO CHILD in the US foster care system.

Children of gay couples have been shown to be more intelligent, compassionate, and driven. And gay parents will not have an accidental child, and often go through great lengths to become parents, making them less likely to take their gift for granted, and be more educated in parenting (Pawelski, 2006). Gay people not only make suitable parents, but exceptional parents--which also translates to minimal to 0% of cases of child abuse in same-sex parent homes (http://www.huffingtonpost.com/…/lesbians-child-abuse-0-perc…). Kids in foster care deserve loving homes, same-sex or otherwise.

If that isn’t enough proof of the need for same-sex acceptance and rights, the only other proof I can offer is that of near death experiences, which provide a spiritual window into how God treats homosexuality. In all near death experiences, who the people had sex with, when they had sex with them, and whether or not they were married mattered not during the life review process post death.

God, nor any Divine Being witnessing the life review had no care, judgment, or concern over these matters (http://www.near-death.com/experiences/gay-and-lesbian.html). What was understood by more detailed stories, was that those we encountered and interacted with were often part of a Divine purpose. Same-sex relationships were just as destined as opposite-sex relationships (http://www.near-death.com/…/exp…/mellen-thomas-benedict.html).

Currently, The Faith is harming a portion of its own population by excluding the LGBT community. While the Faith preaches oneness and love, many communities do not know how to contend with their beliefs, and facing LGBT Baha’i’s. Because of this, they are often quietly shunned and excluded from activities. Some may be approached with hostility. Some others are approached by members who think they can say it’s okay to be who you are, you just can’t act on your feelings; they are a temptation you must resist; etc., but this leaves these people feeling trapped, unheard, invalidated, and physically ill with being in their own bodies. These words are just as harmful as the hostility, and can lead one to feeling hopeless and suicidal. Attempting to justify the existence of LGBT individuals through the limited scope of the Faith is not just hurting these individuals, but the Baha’i community as a whole. The Faith cannot progress if a part of its family is suffering, and I foresee a decay in the Faith until this illness is repaired.

I am confident, comfortable, and happy with my decision to leave the Faith, though remorseful for the reasons. It feels right with every fiber of my being. I must follow my heart. I do not wish to be contacted to be persuaded otherwise, and considering my feelings towards the community here, I definitely do not seek council with any of these particular individuals. I must continue to follow my truth wherever it leads me, or I will not feel whole. I pray for the Faith that it grows, heals, and becomes what this world needs, otherwise it will only become part of the decay. Abdu'l-Bahá says: 'If religion be the cause of disunity, then irreligion is surely to be preferred.' (Compilations, Bahiyyih Khanum, p. 202) Such a commonly used quote among Baha’i’s, and yet, I have seen so much disunity without proper concern and rectification. I pray for change. I think the Baha’i Faith has the most potential of the religions, but what good is that potential if it already appears to be decaying within its first 300 years of birth. I am not the only person waking up to spiritual abilities and insight.

There is a shift happening that no religion can control. The Baha’i Faith has the potential to keep up only if it is willing to let go of its own traditions and ego, or it shall be among the archaic faiths that could not accommodate the Spirit, and will fade into the past. I think the Baha’i Faith can be way more than that.

With love, regards, and best wishes


“Nobody has the power to change others, only themselves. By changing ourselves, it’s possible to inspire others to change. The ego wants to have power, and it thinks that it already knows everything and can change the other. One of the greatest distractions on the spiritual path is to think that we know more than others, wanting to change them according to our own beliefs.”
Posted by oreydc at 11:49 AM No comments:

Today's Daily Dharma: Not for Sale

Not for Sale
Read More
Posted by oreydc at 11:46 AM No comments: