“The unveiling of love is a process that begins with actually identifying the layers that cover our capacity to love. When we identify our destructive patterns, we take the first step in the direction towards love. This identification is only possible if we are capable of honesty. We must be honest enough to accept our imperfections.”
Posted by oreydc at 8:07 PM No comments:

I would say that not doing too much is the important thing. We tend to try to overdo everything. Such conceptual actions just create more karma. Consider nondoing, nonaction, for a while, and leaving things as they are.

—His Holiness the Twelfth Gyalwang Drukpa, "Awareness Itself"
Posted by oreydc at 8:06 PM No comments: 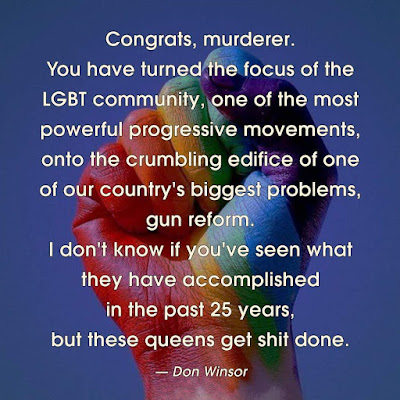 Posted by oreydc at 8:05 PM No comments:


2.8kshares
A GoFundMe campaign set up by Equality Florida to help support the victims of Sunday’s horrific shooting at Orlando’s Pulse Nightclub, has reached over $1.6 million thus far.
Equality Florida, the state’s lesbian, gay, bisexual, and transgender (LGBT) civil rights organization, will ensure that all funds raised will go ‘directly to the victims and families affected by the horrific shooting at Orlando’s Pulse Nightclub.’
In its first 24 hours, the campaign has garnered over 40,000 donations, amounting to over $1.6 million.

The organisation is assuring donors that funds will be properly managed, saying, “We are working with a team of attorneys and experts, including the National Center for Victims of Crime, which deployed funds in both Chattanooga and Aurora, to ensure funds are distributed correctly.”

This fabulous button delivers
The Gaily Grind stories to you
on Facebook:

“We are heartbroken and angry that senseless violence has once again destroyed lives in our state and in our country,” the organization writes.
“Gay clubs hold a significant place in LGBTQ history. They were often the only safe gathering place and this horrific act strikes directly at our sense of safety. June commemorates our community standing up to anti-LGBTQ violence at the Stonewall Inn, the nightclub that has become the first LGBTQ site recognized as a national monument.”
“We have received a steady stream of emails and messages from those seeking to help or to make sense of the senseless. We make no assumptions on motive. We will await the details in tears of sadness and anger. We stand in solidarity and keep our thoughts on all whose lives have been lost or altered forever in this tragedy.”
If you would like to make a contribution to the fund, please visit: https://www.gofundme.com/PulseVictimsFund.
- See more at: http://www.thegailygrind.com/2016/06/13/gofundme-campaign-to-support-orlando-victims-surpasses-1-6-million/#sthash.MjV1cpHd.dpuf
Posted by oreydc at 5:27 PM No comments: