Posted by oreydc at 10:25 PM No comments: Links to this post

Miranda is most well known outside of Brazil as the husband of Glenn Greenwald, the American journalist who released classified documents from the National Security Agency leaked to him in 2013 by former CIA employee Edward Snowden. Greenwald wrote about the documents in articles for The Guardian, revealing numerous global surveillance programs operated by the NSA.

Miranda, a proponent of governmental transparency, was detained for nine hours at London's Heathrow Airport three years ago after British officials found classifed documents on his laptop, some of which they claimed endangered intelligence officers' lives, according to the BBC.

see the original and more here

Posted by oreydc at 10:21 PM No comments: Links to this post

Myoho renge kyo — The wonderful Law of the Lotus Sutra
Ho ben pon dai ni: Skillful Ways
Ni Ji Se Son — There the World Honored One
Ju San Mai — Quietly came up
An Jo Ni Ki — From his samadhi
Go Shari Hotsu — And said to Shariputra:
Sho Bu' Chi E — The wisdom of the Buddhas
Jin Jin Mu Ryo — Is profound and cannot be measured
Go Chi E Mon — Its gate is hard to understand
Nange Nan Nyu — And difficult to enter.
Is Sai Sho Mon — No Shravaka-Disciple
Hyaku Shi Butsu — Or Self-taught buddha
Sho Fu No Chi — Can understand it.
Sho I Sha Ga — Why is that? (because!)
Butsu Zo Shin Gon —the [present] Buddhas attended on many
Hyaku Sen Man Noku — hundreds of thousands of billions
Mu Shu Sho Butsu — Of [past] Buddhas,
Jin Gyo Sho Butsu — And practiced the many teachings
Mu Ryo Do Ho — Of those Buddhas bravely and energetically
Yu Myo Sho Jin — To their far-flung fame till they attained
Myo Sho Fu Mon — The profound Law
Jo Ju Jin Jin — Which you've never heard before,
Mi Zo U Ho — And also because they are exposing
Zui Gi Sho Setsu — The Law according to the capacities
I Shu Nan Ge — Of all living beings a way that the intention is hard to understand
Shari Hotsu — Shariputra!
Go Ju Jo Butsu I Rai — Since I became Buddha, I also
Shu Ju In Nen — Have been stating various teachings
Shu Ju Hi Yu — With different stories of previous lives,
Ko En Gon Kuyo — Various parables, and various similes.
Mu Shu Ho Ben — I have been leading all living beings
In Do Shu Jo — With countless expedients
Ryo Ri Sho Jaku — In order to save them from materialism,
Sho I Sha Ga — Because I have the power
Nyo Rai Ho Ben — To employ skills,
Chi Ken Hara Mitsu — And the power to perform
Kai I Gu Soku — The Paramita (reached goal of wisdom) of insight
Shari Hotsu — Shariputra!
Nyo Rai Chi Ken —The insight of the Tathagatas
Ko Dai Jin Non — Is wide and deep.
Mu Ryo Mu Ge — They have all the [states of mind
Riki Mu Sho I — Towards] countless [living beings],
Zen Jo Ge Da's' San Mai — unchecked [intelligence], powers,
Jin Nyu Mu Sai — Fearlessness, dhyana-concentrations,
Jo Ju Is Sai — Liberations and samadhis. They entered
Mi Zo U Ho — Deep into no limits, and attained the Law which you've never heard before
Shari Hotsu — Shariputra!
Nyo Rai Nyo Shu Ju Fun Betsu —The Tathagatas divide the Law
Gyo Ses Sho Ho — Into various teachings, and state
Gon Ji Nyu Nan — Those teachings so gently and skillfully
Ek Ka Shu Shin — That living being are delighted.
Shari Hotsu — Shariputra!
Shu Yo Gon Shi — In short, the Buddhas attained
Mu Ryo Mu Hen — The countless teachings
Mi Zo U Ho — Which you've never heard before
Bus Shitsu Jo Ju — No more
Shi — Will I say
Shari Hotsu — Shariputra
Fu Shu Bu Setsu — Because the Law
Sho I Sha Ga — attained by the Buddhas
Bus Sho Jo Ju — Is the highest Truth.
Dai Ichi Ke U — Rare [to hear] and hard
Nan Ge Shi Ho —To understand.
Yui Butsu Yo Butsu — Only the Buddhas attained
Nai No Ku Jin — The highest Truth, that is
Sho Ho Jis So — The Reality of All Things
Sho I Sho Ho — In regards to:
Nyo Ze So — Their appearances (form? shape? size? ) as such,
Nyo Ze Sho — Thier natures (essence) as such,
Nyo Ze Tai — Their embodiments (present incarnation) as such,
Nyo Ze Riki — Their powers (potentiality also possibilities) as such,
Nyo Ze Sa — Their activities (function or role) as such,
Nyo Ze In — Their primary causes (obvious cause) as such,
Nyo Ze En — Their environmental causes (process) as such,
Nyo Ze Ka — Their effects (latent or hidden effect) as such,
Nyo Ze Ho — Their requital (final outcome or return) as such,
Nyo Ze Hon Ma' Ku Kyo To — And the combination of these [factors] as such (over and over again)

ALL RIGHT RESERVED BEYOND FOUNDATION
Posted by oreydc at 10:04 PM No comments: Links to this post

ALL RIGHT RESERVED BEYOND FOUNDATION
Posted by oreydc at 10:04 PM No comments: Links to this post

Via PEACE and Grace: Spirituality in a Broken World / FB: TO FOLLOW JESUS IS TO LOVE. NOT HATE. 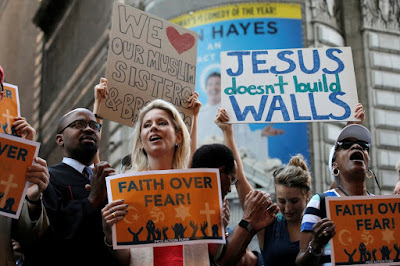 By Mark Y. A. Davies

To my white evangelical Christian friends,

About Mark Y. A. Davies:
Mark Davies is The Wimberly Professor of Social and Ecological Ethics and Director of the World House Institute for Social and Ecological Responsibility at Oklahoma City University. From 2009 to 2015, Mark was dean of the Petree College of Arts and Sciences and Wimberly Professor of Social Ethics at Oklahoma City University. Previously, Mark was dean of the Wimberly School of Religion at Oklahoma City University and Founding Director of the Vivian Wimberly Center for Ethics and Servant Leadership. Prior to becoming dean of the Wimberly School of Religion in 2002, he was associate dean of the Petree College of Arts and Sciences at Oklahoma City University and chair of the department of philosophy. Mark has published in the areas of Boston personalism, process philosophy and ethics, and ecological ethics. Dr. Davies serves on the United Methodist University Senate, which is “an elected body of professionals in higher education created by the General Conference to determine which schools, colleges, universities, and theological schools meet the criteria for listing as institutions affiliated with The United Methodist Church.” He and his wife Kristin live in Edmond, OK in the United States, and they have two daughters. The views expressed by the author in this blog do not necessarily represent the views of Oklahoma City University.
Posted by oreydc at 9:45 PM No comments: Links to this post

“Life in this body has a very short expiration date. The most valuable thing a human soul in evolution has is time. When we least expect it, the game is over. And what have we done with our time? Many waste their time with useless things. They think that before they can relax and enjoy life, they have to struggle and work hard. My vision is different; you can be happy now, even without having conquered the world. But this is only possible when you have given meaning to your life and you are aware of your life’s purpose.”

Sri Prem Baba
Posted by oreydc at 1:15 PM No comments: Links to this post

Buddhism is very personal. . . . It’s about developing what is mostly deeply human in all of us.

—Lama Chopel, "A Lama in Hungary"
Posted by oreydc at 1:13 PM No comments: Links to this post