On that short list is William Pryor, who is considered to be “the most demonstrably anti-gay judicial nominee in recent memory” by the legal advocacy group Lambda Legal.

In the past, Pryor, who now sits on the 11th Circuit Court of Appeals, has made the deplorable argument that consensual sexual activity between same-sex partners should be criminalized.

Raw Story reports that in a 2003 legal brief Pryor argued in favor of a Texas law criminalizing consensual LGBT sex. Comparing consensual sexual activity between same-sex partners to “polygamy, incest, pedophilia, prostitution, and adultery,” Pryor argued that states should prosecute gay people as criminals, arguing that the rights of LGBT people as a group are not protected by the U.S. Constitution.
Pryor wrote:


This Court [the Supreme Court] has never recognized a fundamental right to engage in sexual activity outside of monogamous heterosexual marriage, let alone to engage in homosexual sodomy. Such a right would be antithetical to the ‘traditional relation of the family’ that is ‘as old and as fundamental as our entire civilization.

Pryor also argued that being lesbian or gay is harmful and that Texans needed protection from “homosexual sodomy”:


Texas is hardly alone in concluding that homosexual sodomy may have severe physical, emotional, psychological, and spiritual consequences, which do not necessarily attend heterosexual sodomy, and from which Texas’s citizens need to be protected.

People for the American Way (PFAW) has condemned Judge Pryor’s record, noting that Pryor has used the power of his office in an effort to push the law in an extreme far right direction harmful to the rights and interests of ordinary Americans.


Pryor would deny gay men and lesbians the equal protection of the laws. He believes that it is constitutional to imprison gay men and lesbians for expressing their sexuality in the privacy of their own homes and has voluntarily filed an amicus brief in the Supreme Court urging the Court to uphold a Texas law that criminalizes such private consensual activity.

PFAW also notes Pryor is a staunch opponent of a woman’s right to choose. He has called Roe v. Wade “the worst abomination of constitutional law in our history” and has supported efforts to erect unconstitutional barriers to the exercise of reproductive freedom.

In addition to openly advocating for the criminalization of gay sex, and his refusal to recognize a woman’s right to abortion, Pryor is also an advocate for prayer in school, and rejects the separation of church and state.

Trump is expected to announce his pick for the U.S. Supreme Court next week. 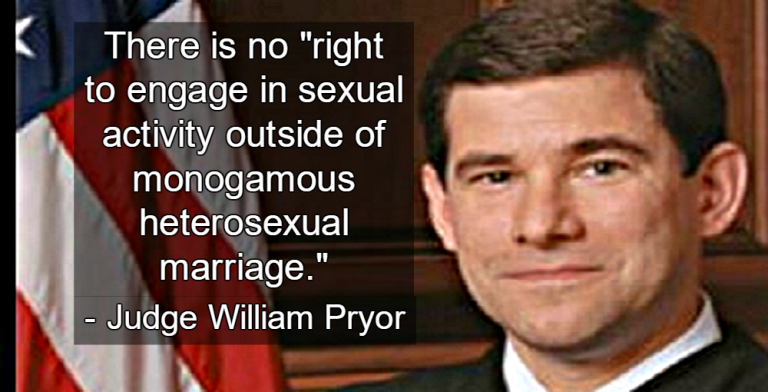 Make the jump here to read the original and more
Posted by oreydc at 12:31 PM